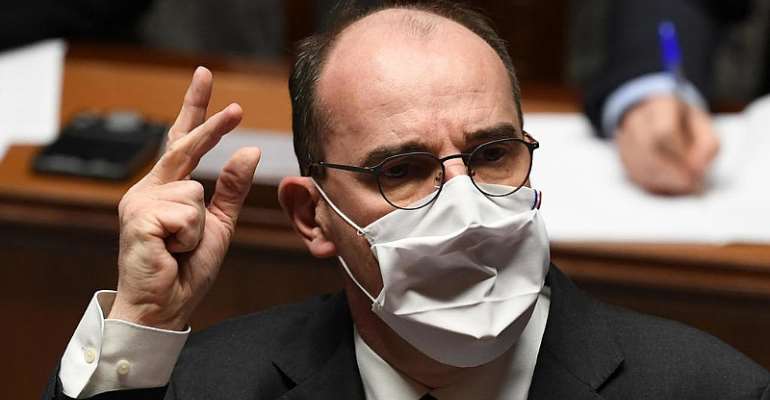 As coronavirus variants continue to push infection rates upwards, at least a fifth of French departments could soon face stricter controls, Prime Minister Jean Castex has warned, just a day after President Emmanuel Macron appeared to suggest that restrictions could begin to ease in "four to six weeks".

France has 3,544 Covid patients in French intensive care units. The number of seriously ill has shown a slow but steady increase over the past week. In the past 24 hours, 379 people died from Covid-related symptoms.

President Emmanuel Macron on Monday hinted that there could soon be an easing of some Covid restrictions in "four to six weeks".

But the prime minister appears not to share the same optimism.

Castex said the government was increasing the level of vigilance, while fully recognising that the public was fed up and that there was a serious level of social and psychological distress.

"The coming weeks are going to be difficult," the prime minister said, adding that he had no objection to lifting some restrictions on a local level.

But these those local arrangements would have to wait, he said: "When the overall situation is clearly getting worse...this is no time to be talking about relaxing the rules."

Education Minister Jean-Michel Blanquer has warned that individual schools will close "if three cases of the UK variant are confirmed, or a single case of either the South African or Brazilian variants".

There is to be a full parliamentary debate on the handling of the Covid epidemic on 24 March.

As the inoculation campaign continues, the French health authorities hope to be able to administer the AstraZeneca shot to those in the 65 to 75 age group, who are at additional risk because other medical conditions.

Only 24 percent of the AstraZeneca doses delivered to France have been used, but the health ministry hopes to speed up that process, especially since general practitioners have been authorised to administer the injections since the end of February.

France's top health authority has recommended that all three vaccines currently in use, AstraZeneca, Pfizer and Moderna, may be administered by nurses, midwives and pharmacists. Up to now, only the AstraZeneca shot was so widely entrusted.

The Johnson & Johnson vaccine, which is still awaiting authorisation for use in France, will not be available before the middle of April

The government's health council is to meet to consider the situation on Wednesday.

A/R: Over 500 houses earmarked for demolition in Afigya Kwab...
6 minutes ago