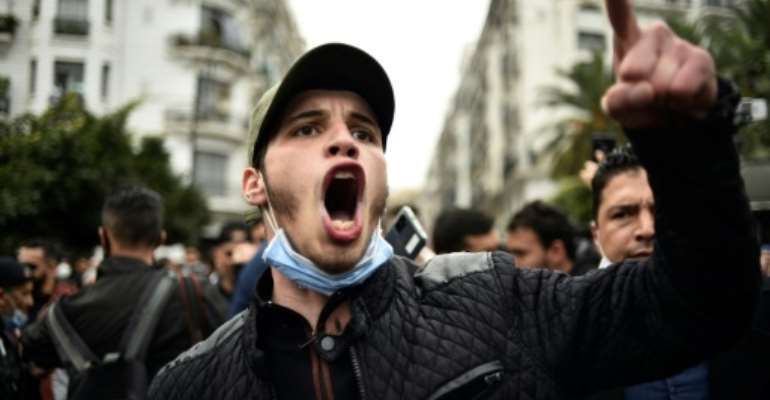 Algerians have returned to the streets in recent weeks in a resurgence of the Hirak anti-government protest movement. By RYAD KRAMDI (AFP)

Some 2,000 Algerians, mostly students, rallied against the government Tuesday in defiance of lockdown measures, as their two-year-old pro-democracy protest movement resurges.

For the second consecutive week, young protesters accompanied by lecturers and other supporters poured through central Algiers, shouting slogans demanding "a free and democratic Algeria" and an end to the military's domination of the North African country.

They marched through the narrow streets of the Casbah in order to evade police cordons set up along the normal route of the once-regular student-led Tuesday marches.

The Hirak protest movement broke out in February 2019 in outrage at then-president Abdelaziz Bouteflika's bid for a fifth term in office.

The ageing strongman was forced to step down weeks later, but the movement continued with twice-weekly demonstrations, demanding sweeping reforms to Algeria's sclerotic institutions.

The rallies were only suspended in March last year as the coronavirus pandemic hit.

Nearly a year later, Algerians flooded the streets on February 22 to mark the movement's second anniversary.

Tuesday also saw rallies in the traditionally restive northeastern region of Kabylie, according to local media and social media posts.

Bouteflika's successor Abdelmadjid Tebboune, elected in a widely boycotted December 2019 poll, has ostensibly reached out to the movement while seeking to neutralise it.

Tuesday's march came a day after the airing of an interview in which he claimed the demands of the "popular, authentic Hirak" had largely been achieved.

"The Algerian people took to the streets and we have met its demands," he said.

But on Tuesday demonstrators jeered at Tebboune, shouting: "elected by fraud, appointed by the army!"