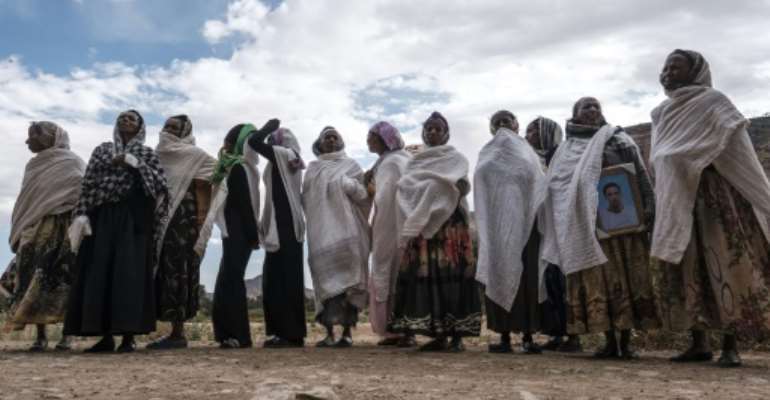 Women gather to mourn the victims of a massacre allegedly perpetrated by Eritrean soldiers in the village of Dengolat, north of Mekele, the capital of Tigray, on February 26, 2021. By EDUARDO SOTERAS (AFP/File)

US Secretary of State Antony Blinken on Tuesday urged Ethiopia's leader to allow an international investigation and called for Eritrean troops to leave after allegations of a massacre.

In a phone call with Prime Minister Abiy Ahmed, Blinken "asked that the government of Ethiopia work with the international community to facilitate independent, international and credible investigations into reported human rights abuses and violations and to hold those responsible accountable," the State Department said.

Blinken said there were a "growing number of credible reports of atrocities and human rights violations and abuses."

Amnesty International last week alleged that Eritrean soldiers fighting in the northern Tigray region had killed hundreds of people in November in what the rights group described as a likely crime against humanity.

The top US diplomat "urged the Ethiopian government to take immediate, concrete steps to protect civilians, including refugees, and to prevent further violence."

Blinken also called for an "immediate end" to hostilities and the withdrawal of all outside forces, including troops from neighboring Eritrea.

Eritrea, Ethiopia's former rival and one of the world's most closed states, has denied the allegation of carrying out a massacre.

The presence of Eritrean troops in the Tigray conflict has been widely documented but has been denied by both countries.

Abiy, a Nobel Peace Prize winner, ordered a military offensive into Tigray in November in response to alleged attacks on the federal army carried out by the region's ruling party, the Tigray People's Liberation Front.

He declared victory weeks afterward, after troops took the regional capital Mekele, but fighting has persisted.