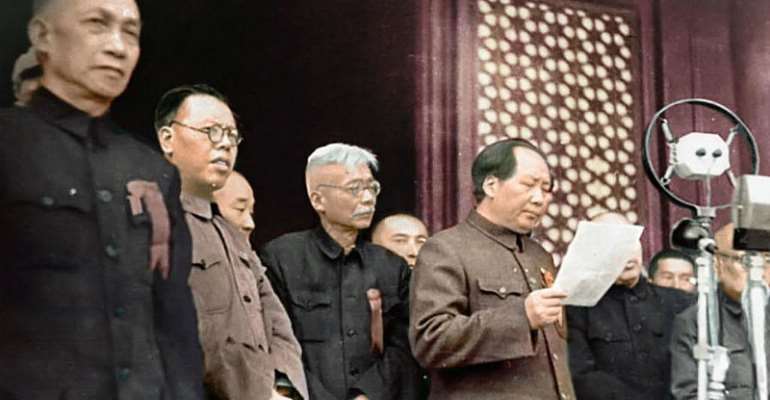 When the communist armies under Mao Zedong swept through China in 1949, pushing Chiang Kai-shek's Nationalists to Taiwan, France feared that Mao would continue his southward move and sweep into the then French colony of Indochina. This is revealed in a detailed and thought-provoking book recounting what was probably the most eventful year in China's modern history.

"The French were very concerned about development in 1949," says Graham Hutchings, author of the book China 1949 - Year of Revolution.

In that year, Mao Zedong, leader of the Chinese Communist Party (CCP) had pushed the troops of Chiang Kai-shek, the Nationalist Kuomintang (KMT) leader, deep into southern China, from where Chiang would eventually escape to the island of Taiwan.

"The French weren't greatly enamoured of Chiang, any more than their European counterparts were. But they were very concerned with what Mao's revolution might mean for them.

"They had a very considerable missionary enterprise in China. They also had significant investments in Shanghai and other cities. And down there in the southwest of China, they had a long-standing presence that they were keen to preserve."

According to Hutchings, the French were very worried about the impact of Mao's revolution on the situation with regard to Ho Chi-minh, and the revolutionary Nationalists in Vietnam. The KMT sent many of their defeated troops across the border into Indochina where French troops disarmed them and put them in camps before they were flown back to Taiwan.

"Zhou Enlai warned the French from any involvement in China's civil war. What the French certainly feared is that by January 1950, if not earlier, Mao had reached out to Ho Chi-minh in Vietnam, and had pledged him backing against the French colonial masters in an attempt to repeat in Vietnam what Mao had done in China.

"So the French were very soon made aware of the serious consequences of Mao's victory for their own colonial stake in southeast Asia," says Hutchings. The only reason that the PLA didn't push on was because Stalin advised against it.

But the events in 1949 had much broader implications than just scaring the French. The year marked the split between the Communists and the Nationalists, a split that remains unresolved to this day.

In mainland China, reunification with Taiwan is the most important policy goal, people in Taiwan have grown increasingly weary of a possible rapprochement.

The CCP's takeover of the mainland in 1949 "was seen as the occupation of China by essentially a Russian-controlled clique," says Hutchings.

"It was regarded as the loss of the country."
But over the decades, Taiwan's perceptions changed. "There might be many in Taiwan, especially the younger people, who say, 'let the Communist Party rule the mainland, but leave us alone.'

"T here is a strong commitment to the Taiwan way of life, which is a bustling, lively, democratic way of life with a free media, rule of law that is generally trusted, and a sense of openness, which is very far from that prevailing in the mainland at the present time."

The only thing that hinders a Communist takeover of Taiwan today is the threat of US intervention. But this was not immediately obvious when the 1949 split was taking place.

Had there been an all-out attack on Taiwan, the US might not have intervened. But Washington's attitude changed when Mao's "People's Volunteers" attacked US-led UN forces during the 1950-1953 Korea War.

"When they saw what the communists were doing, trying to capture the whole of the Korean Peninsula, and that Mao's movement was a revolutionary messianic movement, they decided it had to be stopped," says Hutchings. The US navy started patrolling the Taiwan Straits in an attempt to deter Beijing from invading the island.

And when Washington swapped diplomatic relations from Taiwan to Beijing in 1979, it signed the "Taiwan Relations Act" at the same time, requiring  the United States "to take a very strong interest in the event that China seeks unification by force," and guaranteeing the sale of weapons to the island.

Today, it is far from clear how long US deterrence will be able to fence off a mainland invasion of Taiwan.

"More than 70 years after 1949, China's civil war is still unfinished," says Hutchings, "and we've got a lot of indications coming out of Beijing, particularly since Xi Jinping has taken over as head of the CCP, that this Taiwan issue as he calls, it, must be settled. It can't be left indefinitely. It can't be the job of the next generation, it ought to be the job of this generation."