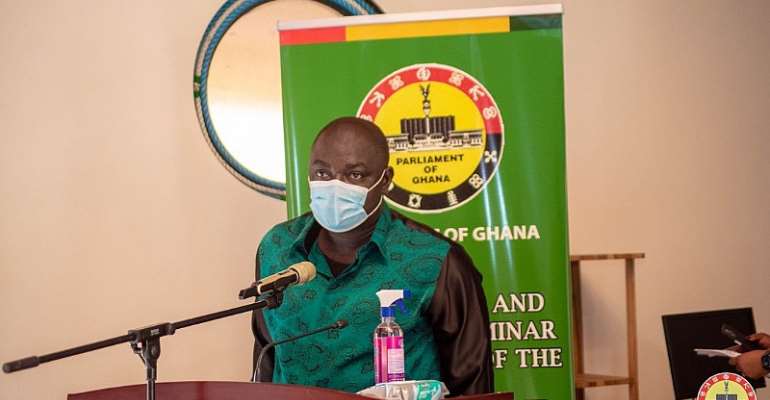 Member of Parliament (MP) for the Mpraeso, Mr. Davis Opoku Ansah has accused the National Democratic Congress of inciting its legislators on the Appointments Committee against President Nana Akufo-Addo’s ministerial nominees.

He argued that Ghana’s democracy will be weakened if political parties are allowed to control their Members of Parliament.

The NDC MPs on the Committee have unanimously rejected the approval of some ministers-designate.

Besides the three nominees who the NDC members on the committee have decided not to approve, there are a few others whose decision is yet to be taken on their approval or rejection.

Speaking on the Citi TV’s Breakfast daily on Tuesday, March 2, 2021, the Mpraeso MP urged Ghanaians to speak up against the action of the NDC.

“The NDC is doing politics as usual and must be condemned by all. The party leadership controlling the Minority MPs is worrying for our democracy and must be looked at. There is a reason why we all took the oath during our swearing-in as MPs.”

“The reasons assigned to the rejection of these MPs are very empty. I think they (Minority) demanding some further explanations on the other five is the way to go but the party leadership issuing the statement and all of that is worrying and must be condemned because it will weaken Parliament.”

He subsequently suggested that the NDC is doing this to court media attention ahead of the Supreme Court ruling on Thursday.

“You need to look at the timelines again. We are expecting a major ruling on Thursday from the Supreme Court, and I am sure the NDC would want a certain noise to compete with that news.”

Meanwhile, the Appointments Committee will continue with its work today.

For Mrs. Koomson, the NDC MPs said she “displayed an alarmingly abysmal lack of knowledge on the sector she was nominated for.”

The MPs also said she “could not provide convincing grounds for the shooting incident during the Voter Registration Exercise in Kasoa on 20th July 2020 even though we acknowledge her belated apology for her recklessly dangerous conduct.”

For Mr. Nkrumah, the MPs cited a lack of sincerity, among others, on issues concerning the collapse of a microfinance institution he was a major shareholder in.

“The Minister-designate for Information was not the least candid with the committee on the multiple infractions of the law leading to the Bank of Ghana's revocation of the license of Oval Microfinance – a company in which he was 83% majority shareholder.”

The NDC MPs also feel Dr. Owusu Afriyie Akoto fell short of standards of truthfulness in some of his submissions.

“The Minister-designate was particularly discourteous, downright condescending and offensively arrogant in his appearance at the committee which is not the kind of attitude expected of public servants,” their assessment of the vetting said.