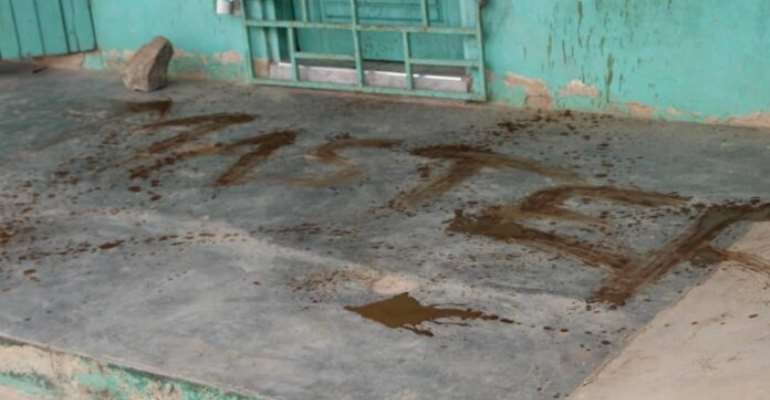 Teachers of King of Glory Presbyterian Basic School in Bonya a suburb of New Juaben South Municipality of the Eastern Region have boycotted school following the 'shit bombing' of the school by unknown persons on Monday morning.

The perpetrators used human faeces to smear the doors and windows of the Headteacher’s office as well as the walls of the JHS classrooms.

They also used the faeces to write names of three teachers – “Master, Judith, and Polo” in what appears to be a threat to the teachers.

The incident has disrupted academic work as the entire teachers have decided to suspend teaching until the perpetrators are arrested and dealt with.

Police Personnel from Adweso District Police Command and officials from the Presbyterian Education unit together with the Bonya community leaders were in the school.

The Assembly Member for the area Edward Gyesi Mensah told Kasapa FM that, Management of the school suspects three JHS students recently sent home by the headmaster to bring their parents over gross misconduct.

The Assemblymember condemned the act and assured of helping to bring the perpetrators to book.

Meanwhile, some of the stranded students say they were supposed to write class test and mock examination this morning but for the incident.

Meanwhile, one of the suspected students has been arrested to assist Police in the investigation.

The Koforidua Bonya School incident is happening at the back of an attack on a Teacher at Kroma 2 JHS school in Nungua in the Greater Accra Region.

It would be recalled that a final year student of Kroma 2 JHS at Nungua, a suburb of Accra, on Thursday together with his gang attacked a teacher for punishing him over his failure to do his homework.

The information indicated that the student, run home after he was punished, gathered his gang in a Sprinter Bus, and stormed the school to attack the teacher leaving the teacher with a facial wound.

The teacher was rescued by his colleagues and rushed to the LEKMA Hospital where his wounds were stitched and later discharged.

After the attack, the mother of the student also besieged the school and rained insults on the teacher identified as Mr Moses Onyameasem who was already in hospital receiving treatment for his wounds.

The student was arrested on Friday.