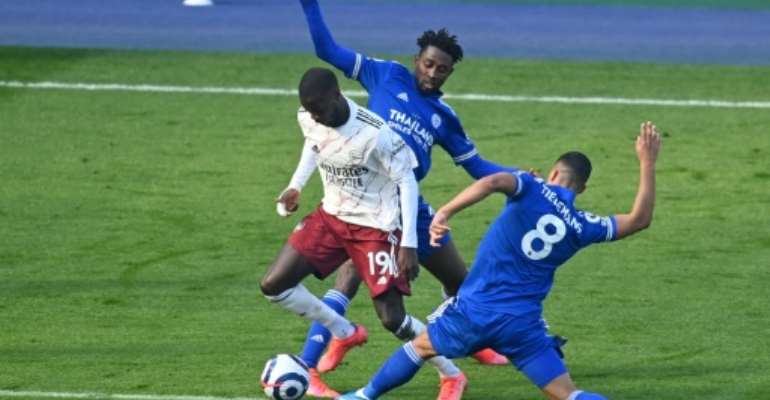 Arsenal winger Nicolas Pepe (L) is fouled during his outstanding performance against Leicester City at the weekend. By Michael Regan (POOL/AFP)

Ivory Coast winger Nicolas Pepe delivered one of the best performances of his difficult spell with Arsenal as he scored in a 3-1 Premier League victory over Leicester City at the weekend.

He has struggled to make an impact since signing from Lille for £72 million in 2019, but Arsenal manager Mikel Arteta has kept faith, even after his needless red card against Leeds this term.

Another impressive Ivorian was AC Milan midfielder Franck Kessie, whose goal in a 2-1 win at Roma was his eighth of the campaign, overtaking his previous best tally for a Serie A season.

Here, AFP Sport rounds up the performances of African stars in the major European leagues:

The 25-year-old repaid Arteta's confidence at Leicester, winning the free-kick that led to David Luiz's equaliser and then wrapping up the points with a 52nd-minute tap-in after starting his team's superb counter-attack.

The Morocco midfielder started for just the second time in the league since Thomas Tuchel took charge, but failed to impress in a 0-0 draw against Manchester United. Ziyech had been used largely as a substitute since Tuchel replaced sacked Frank Lampard in January.

Liverpool snapped a four-game losing streak with a 2-0 win at Sheffield United despite their two top scorers failing to fire. Salah had multiple chances to extend his lead as the Premier League's top scorer but failed to beat inspired goalkeeper Aaron Ramsdale.

The 34-year-old scored a rare goal which could help Eibar stay in La Liga. Senegal international Diop met Aleix Garcia's cross with a superb header to net for the first time this season and snatch a point for Eibar in a 1-1 draw at home to bottom side Huesca. 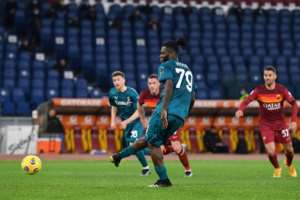 Midfielder Franck Kessie (L) puts AC Milan ahead against Roma by converting a penalty at the weekend. By Tiziana FABI (AFP)

A Kessie penalty gave second-placed Milan the lead five minutes before the break in a 2-1 win over title and Champions League rivals Roma to keep them four points behind leaders Inter.

Algerian Ghoulam set up record scorer Dries Mertens for his 131st strike on his first start in over two months after injury as Napoli beat Benevento 2-0. Gennaro Gattuso's sixth-placed side held on for the points despite Senegalese Koulibaly's sending off 10 minutes from time.

Ivory Coast-born French forward Karamoh scored the opening goal for relegation-threatened Parma after 17 minutes at Spezia but went off injured in the second half with the hosts hitting back with an Emmanuel Gyasi brace for a 2-2 draw.

Senegalese defender Mbaye got the breakthrough as Bologna snapped their 15-match winless league run against Lazio with a 2-0 victory against the European hopefuls. Mbaye tapped in a rebound seven minutes after the break for his fourth league goal in six seasons with the club. Gambian Barrow set up Nicola Sansone for the second goal.

The Cameroon striker headed Bayern into the lead in a 5-1 thrashing of Cologne with a close-range goal from a Leon Goretzka cross. It was the 31-year-old's first Bundesliga goal this season on only his fourth Bundesliga start.

The Algerian midfielder had a second-half penalty saved in Schalke's 5-1 thrashing at Stuttgart which keeps the Royal Blues rooted to the bottom of the Bundesliga table. Bentaleb came off the bench early in the second half for his second league game after being banished to the reserves for disciplinary reasons.

The Togolese striker played a decisive role in his side's equaliser as Hoffenheim drew 1-1 at Union Berlin. The ball bounced off Bebou and Union defender Nico Schlotterbeck as they fought to get on the end of an Andrej Kramaric cross. Initially given to Bebou, the goal was later confirmed as an own-goal.

The Cameroon international scored his 12th Ligue 1 goal this season in the 21st minute against Marseille when he collected Lucas Paqueta's pass. But their hopes of a seventh win in eight games were dashed when Arkadiusz Milik levelled.