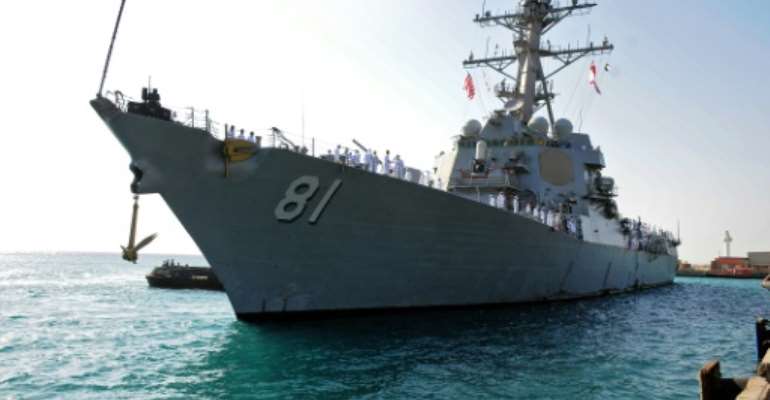 The USS Winston S. Churchill docked in Port Sudan on Monday. By - (AFP)

A US warship docked in Sudan Monday a day after a Russian frigate arrived in the same key Red Sea port where Moscow is planning to establish a naval logistics base, an AFP correspondent said.

An expeditionary fast transport ship, the USNS Carson City, had already docked in the port on February 24, the "first US navy ship to visit Sudan in decades", the US embassy in Khartoum said in a statement at the time.

It "highlights the willingness" of the US military to "strengthen their renewed partnership" with Sudan's armed forces, it added.

The arrival of the USS Churchill was "the second (US) ship to stop in Sudan this week," said US Charge d'Affaires Brian Shukan.

Its arrival, "sheds light on US support for a democratic transition in Sudan," Shukan added, in a message on Twitter.

The USS Churchill docked shortly after Russia's Admiral Grigorovich frigate arrived in Port Sudan, where the Russian navy said "a logistical support base" would be created.

The Admiral Grigorovich frigate would refuel and its crew rest after exercises in the Indian Ocean off Pakistan, the navy added. 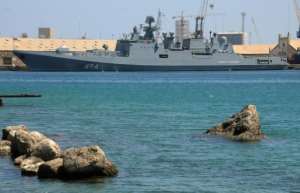 Sudan's military said the Admiral Grigorovich's visit was "part of advancing diplomatic relations" between the two countries, according to a statement late Sunday.

In December, Russia announced signing a 25-year agreement to build a naval base in Port Sudan, part of Moscow's latest push into Africa as it seeks to renew its geopolitical clout.

The purpose of the base will be to "uphold peace and stability in the region", according to the deal.

Russia's navy will be allowed to keep up to four ships at a time at the base including nuclear-powered vessels. The base will be manned by up to 300 military and civilian personnel.

Russia will have the right to transport via Sudan's airports and ports "weapons, ammunition and equipment" needed for the naval base to function.

The Red Sea naval base will be Russia's first in Africa and only its second on foreign soil, after Tartous in Syria. 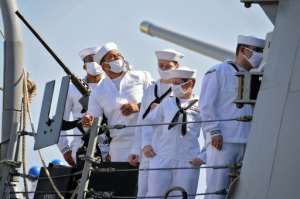 US sailors stand aboard the USS Winston S. Churchill while it anchors in Port Sudan. By - (AFP)

The US has its only permanent base in Africa in the port of Djibouti, 1,000 kilometres (625 miles) to the south, which overlooks the narrow strait between the Red Sea and the Gulf of Aden -- a chokepoint for world shipping.

After Bashir was toppled, Sudan is led by an civilian-majority administration which has been seeking reintegration in the international community and to ending decades of pariah status.

In December, Washington removed Khartoum from its blacklist as part of a deal for Sudan to agree to normalise ties with Israel.

The move is hoped to help fix Sudan's beleaguered economy suffering from decades of US sanctions, mismanagement and civil war, as well as by the secession of oil-rich South Sudan in 2011.