Election Petition: 'E be ye pinsooo' for dead goat or lame horse and its vulture-allies next week — Koku Anyidoho jabs

The suspended Deputy General Secretary of the opposition National Democratic Congress (NDC) Koku Anyidoho has been at the throat of the party in recent times.

He has been throwing subtle attacks at the party Executives and their 2020 Presidential candidate John Dramani Mahama monitored by this portal.

Koku Anyidoho was recently suspended over misconduct following his persistent comments which give many the impression that he is in 'bed' with the ruling party NPP.

Ever since the suspension, he has gone all-out and more aggressive in what some party folks describe as anti-NDC comments. His alleged 'disdain' for the party started after his BNI case over an alleged threat against Akufo-Addo's government on an Accra-based radio station.

Koku Anyidoho who has vowed to remain loyal to the late former President John Evans Atta Mills has since after his release from the BNI been making comments that have caused his party folks to go berserk like a bull in a Chinese shop. These feverish attacks compelled two card bearing members of the party to petition the party hierarchy for action taken against him.

But Koku Anyidoho has since taken to his Twitter page to release episodes of weekly jabs at the party.

The latest jab being the judgement day for the election petition case on March 4.

The "dead goat" metaphor was a popular tag on John Dramani Mahama during his presidency in March 2015.

President John Mahama’s infamous “dead goat” comment has been named one of the best African quotes for the year 2015 by the BBC.

President Mahama made the “dead goat” comment while he was addressing Ghanaians in Botswana in response to industrial actions in Ghana.

President Mahama essentially compared himself to a dead goat saying, “I have seen more demonstrations and strikes in my first two years. I don’t think it can get worse. It is said that when you kill a goat and you frighten it with a knife, it doesn’t fear the knife because it is dead already. I have a dead-goat syndrome.”

So obviously, Mr Koku Anyidoho subtle attack is directed at former President Mahama who has been missing from the scene recently and his silence in the raging debate over the legalisation of LGBTQI and matters arising in the country. 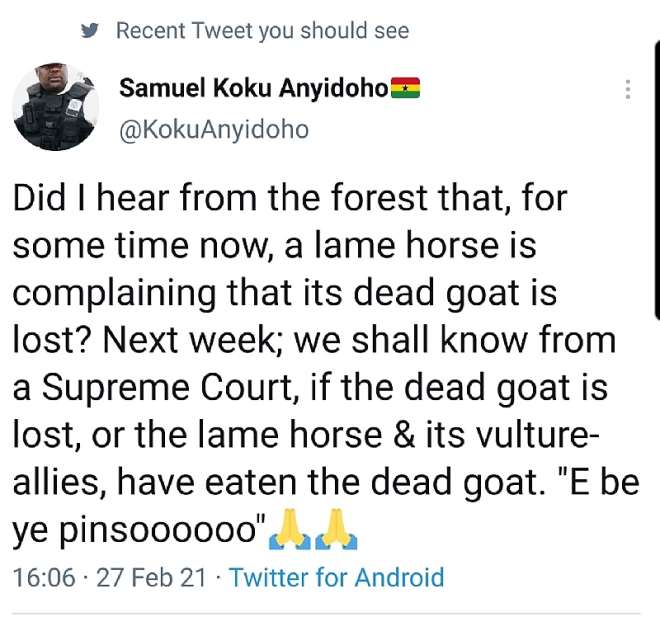