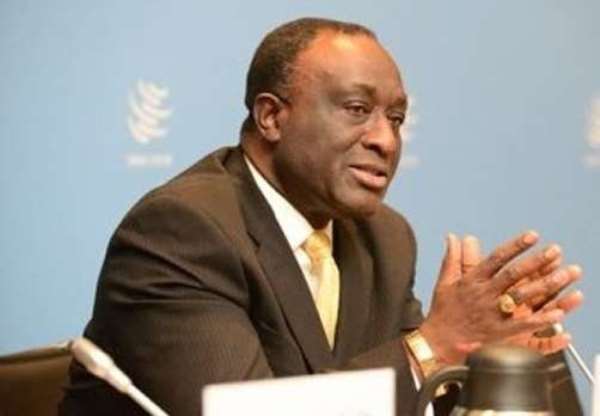 Ghana beyond aid is a strategic vision of our hard-working president Akufo Addo, which is aimed at transitioning Ghana from our current socio-economic status to a prosperous and buoyant economy that is in charge of its own destiny.

Ghana beyond aid is therefore all about how to leverage and deploy our resources for our transformation as a people.

Alan Kwadwo Kyerematen with practical wisdom in a Ghana beyond aid started with his vision of seeing a Ghana that is at the center stage of a continental trade movement.

For Ghana to realize Her potential of the continental trade movement, Hon. Alan Kyerematen years earlier led efforts in building capacity in various African countries in trade policy formulation and trade negotiations. Hon. Alan Kyerematen was one of the leading members of the technical team that provided strategic guidance and support to the African Union (AU) Commission in developing and elaborating an action plan for boosting intra-African Trade and preparing a framework for the establishment of a Continental Free Trade Area.

Fast forward, in July 2019, Ghana was selected by the AU Heads of State and Government to host the Headquarters of the African Continental Free Trade Area (AfCFTA) in Accra, after a successful bid process.

AfCFTA is, by the number of participating countries, the largest trade agreement since the formation of the World Trade Organisation (WTO).

It’s not just a trade agreement, but also a potential game-changer for Africans, hence the African continent must not take this window of opportunity lightly.

AfCTA is also an agreement aimed at enhancing Ghana's current industrial development agenda and contribute to the diversification of the Ghanaian economy for accelerated inclusive economic growth and development.

Ghana can now export freely Her Products within the continent without any struggle as a result of AfCTA.

The Holy Bible states it clear that; lack of vision make my people perish (Proverbs 29:18).

I can confidently say that as this was initially just on paper, Hon. Alan Kwadwo Kyerematen is now practically enforcing into reality the dying need ( Ghana beyond Aid) of our hard-working president Nana Addo Danquah Akufo Addo.

The hard work of Alan Kwadwo Kyerematen in making the President's vision a reality is so impressive and has won his heart, the heart of Ghanaians, West Africa and Africa at large.

As a good Coach, you only repeat players who have performed beyond reasonable doubt in your second half of a football match.

Alan Kwadwo Kyerematen has a vision beyond just being a player, but can also Coach others to bring to bare the potentials in them and their effects to nation building.

For this and many is why we continually ask Ghanaians to support the man with Ghana's development at heart to realize his dreams of Coaching this Nation.

Why is Alan a game changer? He is one because of the many successes he has chalked as a minister in various regards.

As the popular Akan saying; If a naked person promises you a cloth, listen to his name. Naked people don't give clothing and you can't give what you don't have.

Alan Kwadwo Kyerematen has a vision and the ability to make the vision a reality. We don't need talks and questions in Africa anymore, but rather practical actions coupled with unforgettable achievements and experiences, of which Alan has proven beyond reasonable doubt that he is the Moses to take Us to the promised Land (Ghana Beyond Aid).

If Ghana must go beyond Aid, then Alan must go beyond the eight years of Nana Addo Dankwah Akufo Addo's government. As the senior most effective and experience player will captain the NPP in 2024 to retain victory for the elephants as a president.

Ghana needs selfless leaders and Alan Kwadwo Kyerematen is one in millions. The way he was instrumental in President Kuffour, Mahama and more especially in President Akufo Addo's government is enough reason to tell the entire Ghanaian populace that Ghana's well-being is his heart beat.

Alan the versatile leader, the loyal leader, the humble leader, the game-changer, and above all the visionary leader. His dream is to see Ghana attain her beyond Aid agenda.

Alan for a Ghana beyond Aid!

Alan for a strong economy!

Alan for Continuity of a prosperous Ghana!