Why Eritrean refugees choose the risky migration to Europe 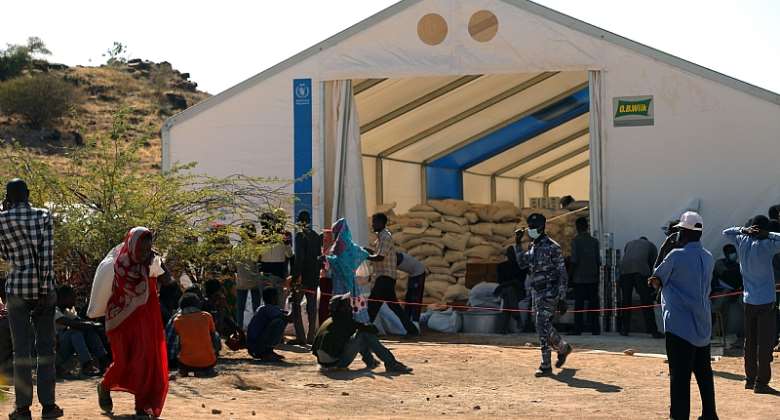 A warehouse for flour preservation and distribution to refugees at a refugee camp in Ethiopia. - Source: Mohammed Abu Obaid/EPA-EFE

In November 2020, fighting in the Tigray region of Ethiopia destroyed a secondary school which opened in 2018 in the Hitsats refugee camp . The school was attended by both refugees and Ethiopians.

Ethiopia has a reputation for hosting long-term refugees. It's the second largest host country in Africa with a hosting history that dates back to the 1950s.

During the 2016 Refugee Summit it made nine pledges to increase opportunities for refugees to engage in legal work, education and land ownership. Most components of these pledges have yet to be fully enacted and most refugees remain confined to camps.

The pledges were voted into Ethiopian law in 2019 ; the same year that Prime Minister Abiy Ahmed earned the Nobel Peace Prize for his role in ending the border conflict with Eritrea.

One of the pledges promised to build more secondary schools and expand access to a refugee university scholarship programme.

But even before the Tigray war, as many as two-thirds of Eritrean refugees , the majority of whom are young men and unaccompanied minors , chose not to take advantage of educational opportunities designed to keep them in Ethiopia. Instead many of them chose the dangerous journey to Europe, where they risk falling prey to human traffickers, abuse, detention and death .

We conducted research with Eritrean refugees in Ethiopia to find out why they choose to move on rather than take advantage of the opportunity to get an education.

We found that education and local integration programs focus on providing refugees with a safe place. However, refugees also care about time – specifically the future. To feel safe, they need to be able to work toward a desirable future. In other words, they want a life that is ordered teleologically .

Our research took place between 2016 and 2019. We did our fieldwork in three Eritrean refugee camps in the Tigray region and in Addis Ababa, with urban refugees and policymakers. We also used social media to connect with participants.

We discovered that although refugees are aware of the risks of leaving, there are risks to staying, including the despair of being stuck in 'camp time' with no prospects for a future. For some refugees, going to school can alleviate these feelings of hopelessness. One of refugee we spoke to said this:

I used to spend my time idle, walking around the camp, thinking about nothing. It stressed me. It's better to spend your time meaningfully in school rather than sitting at home or in a shelter.

But this is not always the case. We found that refugee schools struggle to enrol and retain students. They have low enrolment rates and many students drop out.

The question is this: why do so many refugees leave despite grave risks and the presence of programmes designed to stop them from migrating?

Long before the war in Tigray and the COVID-19 pandemic, refugees weighed the risks of migrating versus remaining. We found that for Eritrean refugees in Ethiopia, the promise of a good education is not enough to make them stay because there are limited prospects for advancement beyond academic qualifications.

Educational opportunities are meaningful to refugees, but also a cause of suffering, particularly for those who have done well. Educated refugees expect to make progress and attain social status. This is difficult in a camp setting.

In the end, the institutions designed to help them move towards their desired future fail them and make them feel responsible for that failure. Although they are restrained by legal and structural barriers many internalise the blame.

Refugees exist in a painful, unending present. Time in the camps doesn't move forward. Educated refugees are stuck, without real opportunities to create a path for a better future.

Global migration policy focuses on local integration as the most viable solution for an estimated 26 million refugees around the world; half under the age of 18.

Protracted conflicts and widening inequality prevent the return of refugees to their home countries, and less than 1% of refugees are resettled each year.

Education potentially anchors refugees in host countries, promising opportunities, advancement and the chance to fulfil aspirations. But our research suggests that even before the war in Tigray put refugees at more risk, they distrusted Ethiopia's commitment to its pledges.

We spoke to Berihu, an Eritrean refugee who graduated from an Ethiopian university and became a teacher in the Hitstats camp, who said:

I was happy to get this opportunity to have a bachelor's degree. But nobody is happy after graduation because they return to the camp and live like the others. We have to use our knowledge to give something back to society.

Graduates like Berihu feel like they can't use their education to advance their careers in the camps. They also worry about their wellbeing, the possibility of political violence, or cuts to rations. While educational pathways have opened up, pathways to legal work have only recently become available. Refugee graduates are confined to “incentive pay” positions in the camps working for small stipends.

Habtom, another refugee in Hitsats, was offered a university scholarship. But he worried about falling into “empty time” in the camp, saying:

Simply sleeping and eating is boring to me. We are like animals.

A few months later he began the dangerous journey north.

Despite Ethiopia's 2019 refugee proclamation , the promised future for refugees is distant. They are still primarily housed in camps. The details of how they can work or own businesses are still being worked out, leaving them vulnerable to low wages and exploitation.

And in 2020, Ethiopia announced the end of prima facie status for Eritrean refugees, meaning there are more bureaucratic hurdles for them to clear. Additionally, there are widespread food shortages in the region. The risks of staying have gotten even greater, which will lead more Eritrean refugees to take the perilous trip to Europe.

Jennifer Riggan received a Fulbright fellowship while undertaking this research.

By Amanda Poole, Professor of Anthropology, Indiana University of Pennsylvania And