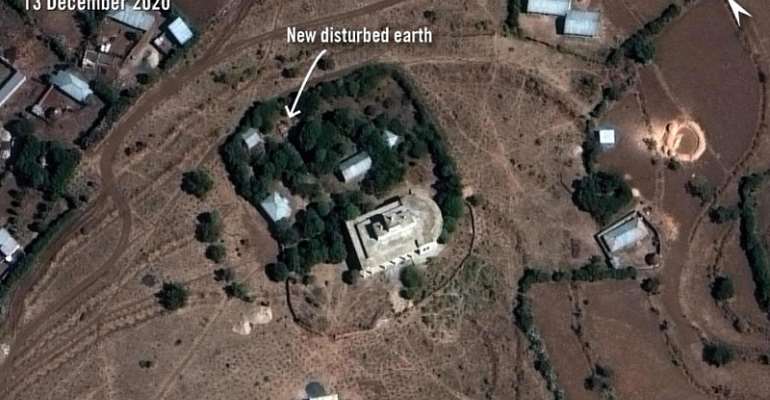 Amnesty International has accused Eritrean soldiers fighting in Ethiopia's Tigray region of carrying out mass killings in the northern city of Axum in November last year. The rights watchdog said soldiers opened fire in the streets and carried out raids, in abuses that could be a crime against humanity.

As Ethiopian and Eritrean troops led an offensive in Axum against the Tigray People's Liberation Front (TPLF), survivors described extrajudicial killings, indiscriminate shelling and looting, according to Amnesty.

The group said its report was based on the testimonies of 41 people who saw mass killings on 28-29 November 2020, including refugees in Sudan who had fled the fighting, and carried out phone interviews with witnesses in Axum.

Satellite imagery from the period confirms evidence of indiscriminate shelling and widespread looting in the city, according to Amnesty.

Fighting started in the Tigray region last November, when Ethiopian Prime Minister Abiy Ahmed launched the operation against the TPLF following accusations that the regional Tigrayan authorities had masterminded an attack against Ethiopian federal troops.

The TPLF had dominated Ethiopia's federal government, based on ethnicity and region, for decades, however, fell out of favour following the appointment of Nobel Peace Prize winner Abiy.

After Ethiopian and Eritrean military forces took control of Axum in mid-November, Eritrean soldiers then went on the rampage, according to Amnesty.

Amnesty said Eritrean soldiers were easily identifiable, having distinct license plates on their vehicles, particular uniforms and were speaking in Arabic or a dialect of the Tigrinya language not from Ethiopia. Some of them also had tribal scarring from an ethnic group from outside Ethiopia.

The mass killings came following an attack carried out by pro-TPLF fighters against army positions. The TPLF-aligned militiamen were armed and supported by locals.

The Eritrean soldiers then entered the city and started killing civilians “deliberately and wantonly” in response, Amnesty said.

Axum's streets were a scene of carnage, according to the London-based rights group. Witnesses told Amnesty about corpses strewn across the streets and plazas.

Eritrean troops continued to rampage through the ancient city, which is known as the former seat of the Kingdom of Aksum. They conducted house-to-house raids, targeting adult men and young boys, as well as a smaller number of women.

Some witnesses described soldiers lining up civilians in the street in a row and shooting them with light-machine guns.

Amnesty said it is unable to confirm the death toll, but has collected the names of at least 240 victims. The organisation said it is unable to independently verify this figure, saying witness testimonies and other evidence makes it likely that hundreds of people were killed.

It took several days to collect and bury the bodies, and Amnesty said it had cross-referenced freshly dug graves in satellite imagery.

In the aftermath, Eritrean solders continued to round up local residents, threatening them with a fresh bout of killings if they resisted.

Looting and stealing increased following the killings, with stores, public buildings, hospital all targeted, with a particular focus on luxury goods and vehicles, as well as medication, and food and drink, according to Amnesty.

The rights group has called for a UN-led investigation into what it describes as “grave violations” in Axum. It demands full access across Tigray for aid, human rights groups and the media.

EU envoy to Ethiopia Pekka Haavisto has warned that the crisis in Tigray appears “out of control”. The Finnish diplomat visited Ethiopia on a fact-finding mission for EU foreign policy chief Joseph Borrell.

Haavisto said “this operation has lasted more than three months, and we do not see the end,” describing PM Abiy's so-called law and order offensive in Tigray against the TPLF.

In a briefing with journalists in Brussels this week, Haavisto said the Ethiopian leadership in Addis Ababa had not provided a “clear picture” of the situation in Tigray, as well as the presence of forces from neighbouring countries.

“The question of Eritrean troops is extremely sensitive, so we don't get the clear answer about the whereabouts or magnitude of the Eritrean troops,” the Finnish foreign minister, as reported by EurActiv website.

The Eritrean government said it was “outraged” by Amnesty's report, calling the accusations preposterous and fallacious, and describing the report as unprofessional and politically motivated.

Yemane Meskel, Eritrea information minister, said the witness testimonies were from members of the TPLF who had fled to refugee camps in Sudan after themselves carrying out massacres in Tigray.

Earlier this week, Tigrayan peacekeepers serving in the UN force in South Sudan said they do not wish to return home to Ethiopia, where the government continues to fight forces loyal to the TPLF, Associated Press newswire reported.

Troops from Ethiopia working in South Sudan are scheduled to be rotated out of service, according to UN spokesperson Stephane Dujarric, pointing to the 169-strong contingent of Ethiopians.