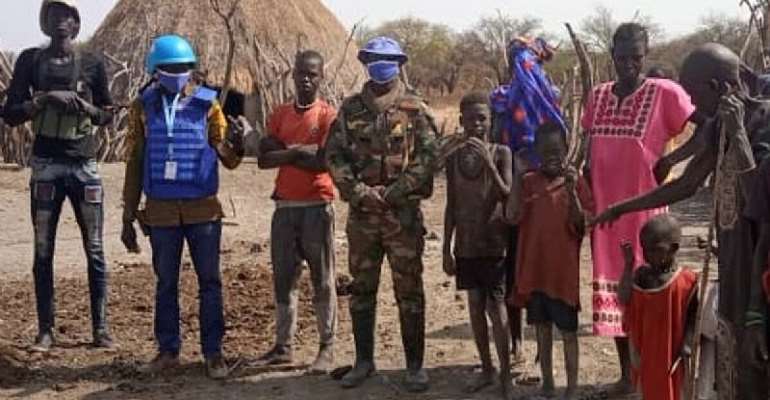 An armed clash in Jahjah village, located near Koch in the Unity region of South Sudan, has led to homes and offices being ransacked and burnt to the ground.

“When the looting started, most of us ran to nearby areas to shelter in the bush,” stated a community member. “We thought that the clashes would continue, but thanks to Ghanaian peacekeepers who arrived very quickly we were able to come out of hiding and, now, many of us are beginning to resume our normal activities though we have suffered many losses.”

50 peacekeepers from Ghana, led by Major Kofi Safo, had established a temporary operating base in Koch earlier this month. “The minute we received reports of the ongoing violence in Jahjah, we were able to send priority patrols at very short notice,” revealed Major Safo.

“Though the perpetrators had fled by the time our peacekeepers reached the scene, we were able to successfully prevent the situation from becoming worse or causing more harm to communities living here,” he said.

Preventing conflict from breaking out or swiftly mitigating its effects on innocent civilians by establishing temporary bases in hotspots has been a focus of UNMISS operations in recent months.

“The area in and around Koch has been volatile of late with early warnings of possible conflict,” stated Lieutenant-General Shailesh Tinaikar, UNMISS Force Commander. “Since we were proactive in deploying our peacekeepers ahead of time, it made it much easier for us to move swiftly when we heard about the situation in Jahjah.”

Since this incident, which took place on 20 February 2021, UNMISS patrols to areas in and around Jahjah village are ongoing. The mission is also evaluating the security and humanitarian needs of those who have been affected.

“Making sure that communities and humanitarian partners are safe is a top priority for UNMISS,” said David Shearer, the Secretary-General’s Special Representative in South Sudan.

“When I visited Bentiu a few weeks ago, I had assured the Governor of our full support to the state administration on security issues. I’m very pleased that our Ghanaian peacekeepers responded quickly and we’re keeping a close watch to make sure tensions don’t increase in Koch.”

Peacekeepers at the temporary base here are consistently engaging with community leaders and members to build confidence and bolster the fragile security situation across the county. Additionally, they have conducted free veterinary care camps in Rier, Patit, Bhang and Wicruop villages, treating numerous animals belonging to livestock owners.