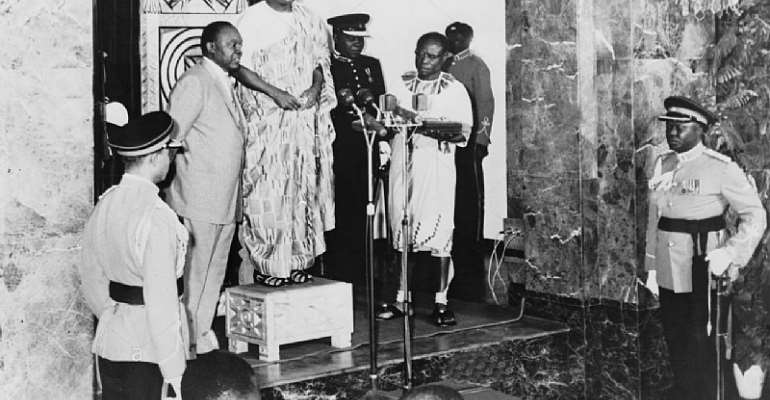 Five decades and 5 years ago today, Accra was boiling!

At 6AM on Radio Ghana, Col. Kotoka announced the overthrow of Nkrumah. He stated, "Fellow citizens of Ghana, I have come to inform you that the millitary, in co-operation with the Ghana Police, have taken over the government of Ghana today. The myth surrounding Nkrumah has been broken. Parliament has been dissolved and Kwame Nkrumah has been dismissed from office."

It is astonishing that this day is passing unmarked in Ghana and Africa. George Santayana was right that " those who ignore history are due to repeat it". Indeed our failure to extract and reflect over the lessons of that first coup has cost us a lot-- in bad governance, useless and unnecessary coups and worthless revolutions.

Nkrumah had led us to independence, build significant infrastructure, transformed education and health and was the defining force for Africa's liberation and unity. And yet, he had made himself President-for-life at the head of a one-party state with powers to dismiss officials, including judges and to detain all for " reasons he saw fit.".

So, with the benefit of hindsight, was his removal justified? Would any of us alive today accept those conditions from another President today? If not then why would that be justified from President Nkrumah?

His supporters argue that he was in a hurry to transform Ghana and that the opposition, in addition to obstructing him, was trying to kill him. Could the state had dealt with subversion and violence while respecting the rule of law? Probably. America has suffered the assassination of a number of Presidents but it did not abandon the rule of law or become a dictatorship.

America had Jefferson, Lincoln, FDR and other great leaders who followed Washington -- to make her greater.

Britain had Gladstone and Disreali to precede Churchill and Thatcher-- to make her great.

China had Deng to follow Mao to make her greater.

And Canada had MacKenzie King and Trudeau after McDonald and Laurier.

Those who have followed in Nkrumah's footsteps have been pale imitations of his leadership abilities.

Were the coup-makers liberators as they claimed or tools of the Western imperialists as their detractors claimed?

If they were traitors, why was the coup so popular?

Nkrumah did not fail alone.

There were many bootlickers who hailed every fatal mistake.

There were Parliamentarians who happily turned every whim into law.

There were judges who made a farce of the law and mocked our motto, "Freedom and Justice" by giving him every ruling he desired.

The central lesson for us is that even with a leader as good as Nkrumah, we need separation of powers with a strong and independent Parliament, coupled with a fearless judiciary and an alert citizenry.