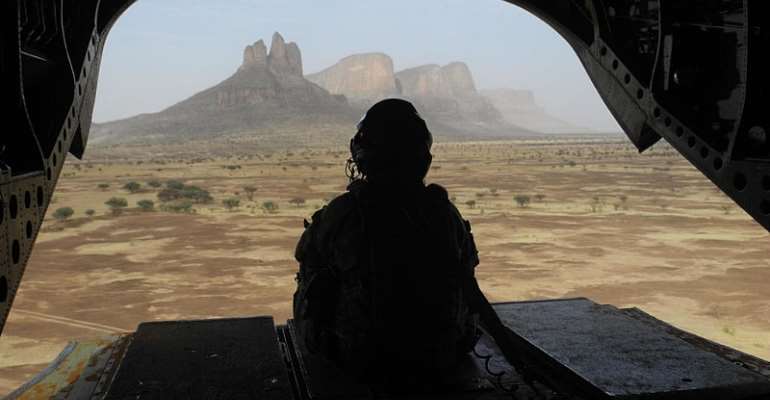 This edition of Paris Perspective looks at the global role of the French military, notably the anti-Islamist Operation Barkhane in Africa's sweeping Sahel – a region as big as Europe, and right on its doorstep.

French military cooperation and deployment has long been orientated towards zones of traditional French influence in Asia, the Middle East and Africa.

The latter is the best example of France's political, economic and military might thanks to colonial roots and the continent's proximity to Europe.

It's no accident that France's most significant overseas engagement, Operation Barkhane, is in Africa.

For seven years and counting, Barkhane has led the fight against jihadists in tandem with the G5 Sahel group of countries, where Islamist insurgents have taken advantage of porous borders to launch attacks and control vast swathes of territory.

“The first thing is that we have been asked by five African countries to say stay there," he says. "Second, is that the threat is very close to Europe. It's on our southern border.”

An expert in international relations, Trinquand has participated in military operations in Lebanon, the former Yugoslavia and in Africa. He now works with the strategic consultancy Marck & Balsan.

Radical Islamist groups such as Al Qaeda in the Islamic Maghreb (AQIM) and the Islamic State Armed Group have a clear plan, he warns, to take hold in this region before bringing the fight to Europe or elsewhere.

France has ramped up its deployment in the Sahel to more than 5,000 troops over the past year. The move has raised eyebrows among critics who say the country is being sucked into an extended military commitment in the Sahel.

There are fears the fight against jihadists in West Africa could become France's Afghanistan.

At a G5 Sahel summit earlier this month, President Emmanuel Macron confirmed there were no plans to adjust France's military presence in the region.

While the increase in French deployment has seen some successes – notably the “neutralisation” of AQIM leader Abdelmalek Droukdel – Trinquand warns this is an unconventional war that can't be won by conventional methods.

“The military is just one tool," he says. "The military can win battles, but they will not win the war, nor the peace."

Any intervention would have to get to the core of the problems that led to radicalisation in the first place. The social and economic grievances that gave rise to jihadism must be tackled, Trinquand adds, and national policies aimed at solving these problems must be supported.

“When you give a Kalashnikov and $100 bucks to someone who has nothing, they will fight,” he says.

"In the north of Mali, the first meeting in Kidal with the Malian government happened just a week ago," Trinquand says. "For two years there were no meetings there. There are no police, no schools, no judges.

“This is where a country must be committed. Nothing is solved if you're just killing one soldier, or jihadist, that will then be immediately replaced by another."

US Secretary of State Antony Blinken issued a supportive statement to G5 Sahel countries this month, underlining US commitment to being a "good partner" in the ongoing fight against the insurgents.

France is hoping the Biden Administration will continue US military support in the region, and carry on providing valuable information and logistics, Trinquand says – adding the capabilities of the US military cannot be underestimated.

“The French have probably three or four drones in operation, while the Americans have 20 of them,” he says. “So that makes a significant difference. Not to mention US satellites.”

As much as two-thirds of Barkhane's logistics come from other forces, and for French troops on the ground, that means relying on the American, British, Spanish and German militaries for the majority of their intelligence.

Trinquand, who has experience commanding multinational operations, says international cooperation is vital to the success of Operation Barkhane and G5 troops engaged with jihadists in the Sahel.

Of course four years of Donald Trump shunning old allies within the EU and NATO have taken a toll on usual levels of cooperation.

The Trump years, Trinquand says, proved very useful for NATO because Europe was forced to increase its budget on the back of news that American support was no longer a given.

But can Europe expect Biden's leadership to provoke a significant shift in US foreign policy? Trinquand notes two major changes.

"The first is that the Biden Administration is returning to multilateralism and that's very important for NATO and international relations," he says. “The second is that now we've got an administration and a president who are on the same page, which is also something new.”

Within the past week, President Biden declared that “America is back” and has pledged to repair the NATO Alliance - something that's led to a sense of relief among international partners.

“But at the same time, the Europeans must keep up their efforts," Trinquand says.

Strains on the transatlantic alliance go beyond Brussels and Washington, with French relations with fellow NATO member Turkey at an all-time low.

A few months ago, a standoff with Ankara over oil and gas prospecting off Cyprus saw France provide military support for Greece, with French air support deployed to the Eastern Mediterranean.

What did France have to gain in joining the dispute? The answer, says Trinquand, is classic geopolitics.

“It's not a regional spat, it's a major geopolitical problem," he explains. "It's not linked to Turkey. It is linked to Erdogan and Erdogan's policy.

Macron recently asked Muslim associations in France to sign a charter affirming the law of the French Republic took precedence over their faith in public affairs. Two organisations refused to sign it.

Trinquand maintains those two organisations are directly linked to Ankara and to Erdogan personally.

Relations between Macron and Erdogan hit at a low in October last year when Erdogan questioned Macron's mental health after the French leader pushed to “reform” Islam in France.

Erdogan's use of "bad boy” Ankara street talk wasn't something Macron was going to be drawn into, says Trinquand.

“President Macron was very cool on that ... and Erdogan realised that he was going too far.”

Since the arrival of the new US Administration, Erdogan has found himself with a “post-Trump problem”, says Trinquand, given Biden is less friendly towards Turkey.

But for all the problems and animosities to be ironed out between NATO allies, there is one issue that will need to be tackled with a united front – Iran.

Donald Trump unilaterally pulled out of the 2015 Iran Nuclear Agreement in 2018, and all the signatories to the deal are now waiting to get Tehran and Washington back in the same room.

What can we expect in the coming 12 months? Will all the players come back to the table on the same terms?

“Obviously they will be looking for more. When the agreement was signed, everybody was saying that we didn't discuss ballistic missiles, and they [Iran] continued their tests.

“So, we've got to work more on that.
“Why? Because all the people who negotiated the agreement are in the new administration. Biden has appointed people who have been in discussion for years with the Iranians."

Iran's upcoming elections will be divisive, says Trinquand, because some political figures will want to appear strong, and will refuse to return to the agreement.

But there is a massive political struggle within Iran. The signatories to the 2015 deal will be sure to capitalise on that when bringing negotiators back to the table in the coming months.

And France's voice will be heard, with President Macron as mediator.

This edition was produced and presented by David Coffey

General Dominique Trinquand, is the director of external and UN relations at Marck & Balsan, a strategic consultancy. He has participated in military operations in Lebanon, the former Yugoslavia and in Africa.