Local government in South Africa is broken: but giving the job to residents carries risks

By Marius Pieterse - The Conversation 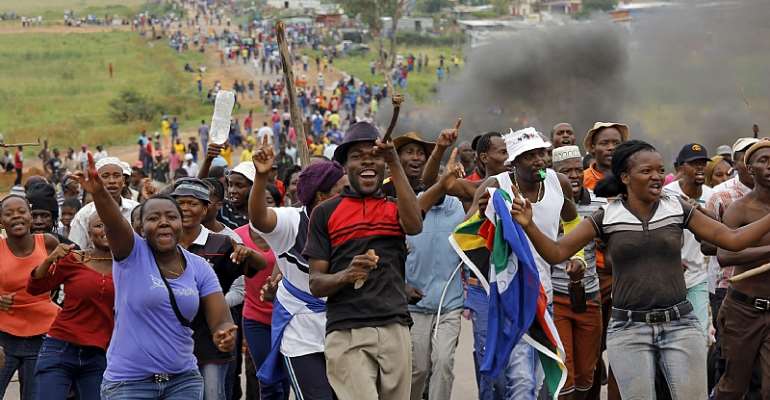 Failure by local government to provide basic services has led to protests around South Africa. Now, some residents are resorting to self-help. - Source: EFE-EPA/Kim Ludbrook

In December 2020, the High Court in Mahikeng, the capital of South Africa's North West Province, made a controversial order after finding that the Kgetlengrivier Local Municipality was in breach of its legal obligations. The municipality had failed to deliver water and sanitation. It had also failed to prevent environmental pollution in the towns of Koster and Swartruggens.

Shortly afterwards, the residents took over delivery of water and sanitation and managed to restore both systems to working order . The municipality strongly objected to the take-over . But, in January, the court sided with the residents and endorsed their control of the services .

The remedies in the judgment were radical and unusual, but received positive press . Even the national government departments cited in the case seemed to agree that drastic action was necessary. They indicated that they would abide by the court's decision .

As with organised community efforts to assist with services in other small towns – examples include Delmas and Senekal , Kgetlengrvier's residents have shown the power of a committed citizenry, in channelling their rejection of government into action that benefits the broader community. Their conduct has been likened to a constructive kind of anarchy .

But, by endorsing their actions, the court essentially ordered the outsourcing of municipal service delivery to an un-elected group of residents.

Moreover, it did so in a way that bypassed the usual legal processes. For instance, the court made no reference to the legal requirements for outsourcing municipal functions in the Municipal Systems Act . The same Act prescribes structures through which residents can participate in local government affairs, which were also ignored.

What does this say about the state of the country's constitutional democracy?

The 1996 Constitution awards municipalities authority and responsibility to run the local affairs of their communities. It further requires provincial and national governments to monitor and support municipalities.

Kgetlengrivier is not the only municipality that has recently been hauled before court because of failure to comply with its constitutional obligations. In several similar cases, courts also had to deal with the ineffectiveness of provincial oversight and support.

In 2020, the Makhanda High Court ordered that the council of Makana Local Municipality in the Eastern Cape Province, be dissolved . This was after a provincial intervention was unable to stop the collapse of service delivery in the town.

In another case, when Emalahleni and Thaba Chweu municipalities in Mpumalanga Province failed to pay their electricity bills due to financial mismanagement, local businesses obtained an interdict to stop Eskom, the power utility, from cutting off the electricity. The court criticised the national and provincial governments for not ensuring that the municipalities could meet their financial obligations.

Moreover, the Human Rights Commission, a state institution that supports constitutional democracy, recently released a report on the pollution of the Vaal River by sewage spills from Emfuleni Local Municipality south of Johannesburg. The council has been under the administration of the provincial government since June 2018 . Since this was clearly ineffective, the commission suggested that national government should step in.

These cases reveal worrying and widespread governance failure at different levels. But the decisions and recommendations in these cases all insist that broken municipalities be fixed from within the constitutional framework of cooperative governance.

The Kgetlengrivier judgment is different. The High Court seems not only to have given up on the municipality, but also on the ability of North West Province to provide support or oversight.

Perhaps the court is justified, since the provincial government is itself under national administration . But is this enough reason to cast aside the constitutional mechanism for dealing with malfunctioning municipalities?

The judgment begs several questions. How sustainable is service delivery by residents? What happens to the structures that have been bypassed? Who takes decisions on how services are delivered? How accountable are these decision makers? What say do other residents have? What is the role of the elected municipal council? What will residents be voting for in the upcoming local government elections?

The residents of Koster and Swartruggens should be applauded for their civic virtue, goodwill, dedication and skill. The country's system of local governance is clearly broken . Active community participation will be essential to fix it.

But one doesn't repair a system by casting it aside. South Africa needs a way to incorporate active citizens within the prevailing constitutional and legal structures. This would strengthen all levels of government.

Marius Pieterse does not work for, consult, own shares in or receive funding from any company or organization that would benefit from this article, and has disclosed no relevant affiliations beyond their academic appointment.

By Marius Pieterse, Professor of Law, University of the Witwatersrand