4 arrested for Taxi robbery at Asamankese 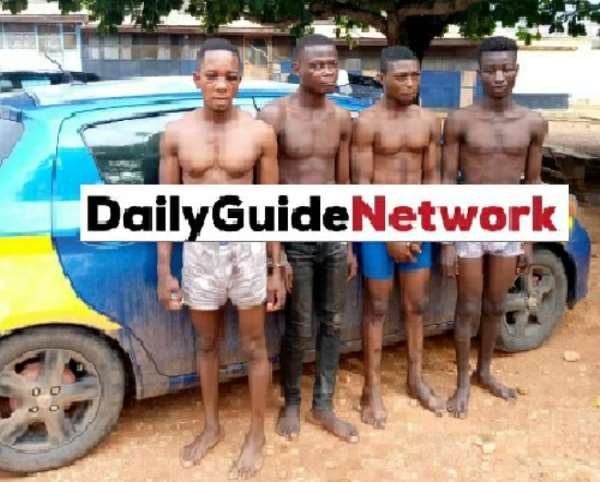 A gang of four men who allegedly hired a taxi cab from Kumasi and ended up beating the driver to snatch it are currently in the grips of the Asamankese Police in the Lower West Akim Municipality of the Eastern Region.

The suspects namely: Stephen Kofi Gyamfi, 22, the ringleader, Kofi Richard, 20, Benjamin Kofi Larbi, 24, and Kelvin Asante 19, were arrested on Wednesday evening at Wasabiampa near Akroso when their move backfired.

According to the Police, the gang leader Stephen Gyamfi Kofi, on Wednesday hired a Toyota Yari taxi cab with registration number AS 1869-20 from Poku Sika Hotel, in Kumasi, the Ashanti Regional capital to Nsawam to inspect his farmland.

He said the taxi driver, Enock Atuobi Okane told the Police that, Stephen Gyamfi Kofi, upon reaching Suhum, asked him to pick the three accomplices on the way.

He said the suspects directed him to take the Asamankese road towards Akroso direction and branch to a village called Wasabiampa on the Akroso road, and while on their way, they signaled him to stop near a bush path.

The victim told the Police that he senses danger and told the suspects that he wants to ease himself in the bush, and he quickly dashed into the bush.

The victim continued that, when he returned, the four suspects deliberately attacked him with severe beatings, with Benjamin Larbi allegedly hitting his shoulder with a stick.

The victim said he managed to escape with the help of an Okada rider, who rushed him to the nearby Police checkpoint at Adiembra whereby they traced and got them arrested at Wasabiampa with the assistance of the village boys.

The suspects were however paraded to the Asamankese Police station together with the Taxi cab and locked up after writing their statements.

The suspects who are currently in the Police custody assisting in investigations are expected to be put before the law court this week.