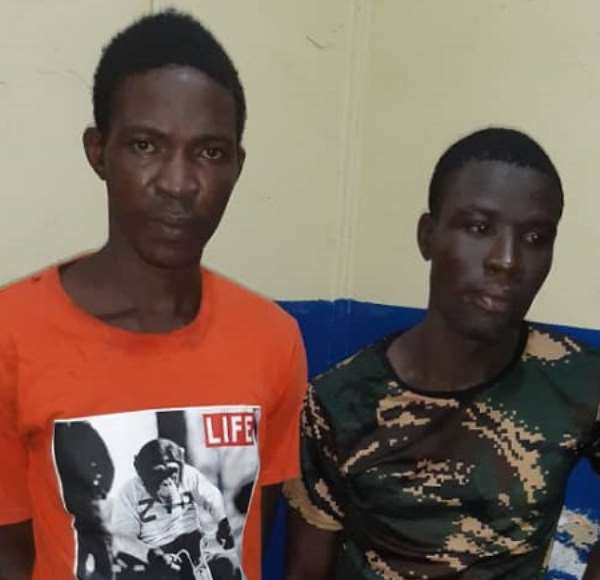 Two suspected bag snatchers operating around Rawlings Park in Accra and its environs have been arrested by the Accra Central Police.

The two, according to information, were arrested in a special operation led by Superintendent Richmond Bonsu, the District Commander.

The suspects have been identified as Emmanuel Nii Boye, 26 years, and Bismark Kwabena, 23 years.

The police said before the operation, they had received several reports of bag snatching in the area and during rush hours.

The Accra Regional Police Public Relations Officer, DSP Efia Tenge, who briefed the media on the arrest, said after receiving several complainants of attacks and bag snatching, the District Commander himself mobilised his men for an evening operation which led to the arrest of the two suspects.

She said around 6pm of Monday February 22, 2021, police personnel stormed Rawlings Park to gather intelligence when the two suspects, snatched the bag of a market woman who was on her way home.

“After snatching the bag, the two men took to their heels but the police chased and arrested them at a distance,” DSP Tenge explained.

She said the bag containing some unspecified amount of money was also retrieved.

The suspects, she revealed, are in the custody of the Accra Central Police assisting with investigations.