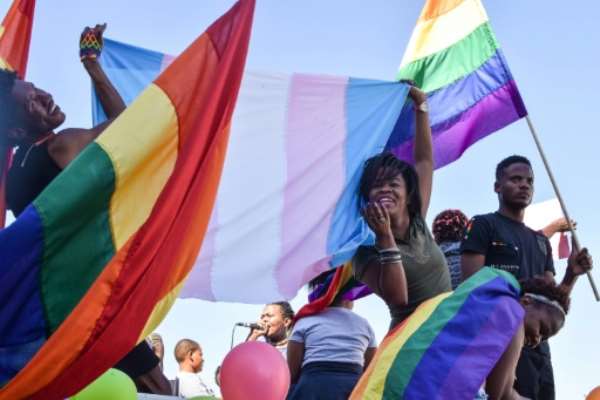 “Then we have this American President, Obama, born of an African father, who is saying we will not give you aid if you don't embrace homosexuality. We ask, was he born out of homosexuality? We need continuity in our race, and that comes from the woman… John and John, no; Maria and Maria, no.” - ROBERT MUGABE

LIKE HIM OR HATE HIM, the late Robert Mugabe, President of Zimbabwe was very strident in his criticisms of gays and lesbians. He once said people like Takunda Amina were “worse than dogs and pigs.” At 24, Takunda had been chased from his family home; his three children asked him tough questions about sex and sexuality; the national press in Zimbabwe tormented him; he was rejected as a disgrace by his parents; the saddest of these lamentable agonies was the fear that not even the best spiritual men could 'cure' him from his gay behaviour.

On another occasion, Mugabe threatened gays and lesbians, “I should like to shut them (gay couples) up in a room to see if they can get pregnant; if they don't, then it's jail because they have claimed they can have children. To lesbians, he noted: “You want to make other women your wives and you the husband? Show us your manhood. Well, that is madness; we refuse to accept that.”

At the UN, General Assembly in 2015, Mugabe charged: “We equally reject attempts to prescribe 'new rights' that are contrary to our values, norms, traditions and beliefs. We are not gays!” On ZDC Radio interview in 2015, he remarked: “…since President Obama endorses same-sex marriage, advocates homosexual people, and enjoys an attractive countenance – thus if it becomes necessary. I shall travel to Washington DC, get down on my knee and ask his hand.”

Despite the petty adversities in our African cultural heritage, Africans normally have a common culture that hates homosexuality – and Robert Mugabe was right when he preached against it in Zimbabwe. He was speaking for the whole of Africa.

Lesbians, Gays, Bisexuals, Transgenders, Queer and Intersex (LGBTQI) establishing an office in Ghana? “Hell is murky! – Fie, my Lord, fie! A soldier, and afeared.” Lady Macbeth would tell Macbeth. Foh-Amaning, the Executive Secretary of the National Coalition for Proper Human Sexual Rights and Family Values has lived up to his billing. Adwoa Safo during her turn at the Appointments Committee of Parliament as the Minister-designate for Gender, Children and Social Protection reiterated the order by President Nana Akufo-Addo to close the office down.

We are glad that the Catholic Bishops' Conference issued a statement demanding that the office must be shut down – that is, despite the fact that its opening had attracted some diplomatic envoys in Ghana. And the National Chief Imam, Sheikh Sharubutu says 'no' to homosexual practices.

The story of Sodom and Gomorrah found in Genesis 19 may not mean much to the “modern” man who has advanced in civilisation to stupid levels. In Leviticus (18:22) we are told: “Do not lie with a man as one lies with a woman; that is detestable.” In Leviticus 20:13: “If a man lies with a man as one lies with a woman, both have done what is detestable. They must be put to death.” In 1 Corinthians 6:9-10, Paul tells the Christian world “…neither the sexually immoral nor men who have sex with men… will inherit the kingdom of God.” In the Chapter of Lut (Lot) of the Holy Quran (7:80-81) one reads “…For ye practise your lusts on men in preference to women; Ye are indeed a people transgressing beyond bounds…”

How can we justify an insane phenomenon on the back of so-called “human rights”? After the Toonen v Australia case in 1994, the UN Human Rights Committee has advocated that laws against homosexuality are a violation of human rights. So, governments, especially in Africa have the temerity to pass tough laws to check this growing nonsensical phenomenon.

The United Nations, no doubt, is championing the decriminalisation of same-sex relationships. In a correspondence to St Lucia, St Kitts and Nevis, in January, 2021, the UN expressed concern over the countries' laws that criminalise same-sex relationships: “…while colonial era buggery and gross indecency laws in Saint Lucia and in St Kitts and Nevis are seldom enforced against consenting people, their impact is pernicious.” Toby, a 38-year-old from Saint Lucia argued before the Human Rights Watch that exclusion and ostracism by his family had driven him to five suicide attempts. In April 2016, he and his partner were attacked as they were entering their home, pelted with stones and subjected to other inhuman treatment.

All human societies (Egyptian, Roman, Japanese, Chinese, European) had at one time or another had human sacrifice. So, we in Africa abolished it. What about slavery and slave trade? What about colonisation and colonialism?

Section 104 of the Criminal Offences Act (Act 29) criminalises “unnatural carnal knowledge”. You may or may not agree with some interpreters who say it means “penile penetration of anything other than vagina” and, therefore, it criminalises LGBT (plus QI). But some lawyers think specific laws should be enacted to expressly criminalise consensual same-sex relationships, especially those between two women.

People (especially men) fear reporting cases of rape against them for fear of being accused themselves of “gay sex”. Yet these acts continue, and people clandestinely indulge in them.

The traditional cultural and religious systems in Ghana frown on LGBT (plus QI) – and, to a man, we are all involved. Professor Mike Oquaye calls homosexuality an 'abomination', equating homosexuality with bestiality.

Human Rights Watch may frown on any criticism of LGBT. What rights do the LGBT (plus QI) have as citizens? Is it not a form of discrimination, some argue? Do they need policy measures that ensure their safety, dignity and equality? Do they seek an amendment of Chapter 5 of the 1992 Constitution on Fundamental Human Rights and Freedoms to include a specific prohibition of discrimination based on sexual orientation?

You may be like Lawyer John Ndebugri who argued in 2012 that there was no law on homosexuality. The known cases of “sexual intercourse in an unnatural manner” refer to “penetrating with the penis”. However, “lesbianism” which is a form of homosexuality does not involve the use of penis. LGBT (plus QI) is a recent phenomenon, and if we are serious about controlling it, a comprehensive law will have to be formulated.

Of course, there appears to be no better translation of homosexuality into some of our local languages. The closest for “buggery” in Twi is “trumu-trumu”, but people would cringe on hearing the word called orally. For those who have that psychological or ethical problem, we may simply call it “T –T”. We say no to it. Call us uncivilised!