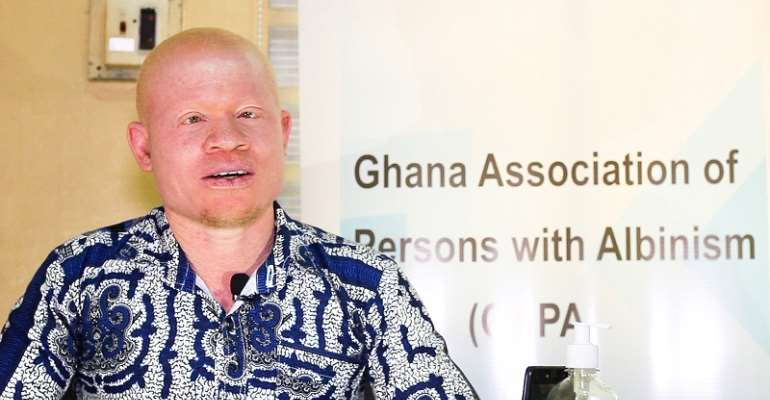 The Ghana Association of Persons with Albinism (GAPA), has distanced itself from a statement of an albinism association, Association of African Albinos (AAA), expelling Lawyer Moses Foh-Amoaning from its fold.

In a statement issued on Wednesday, February 24, 2021, the association said, "GAPA is not a member of, and has no affiliation with AAA. GAPA belongs to an umbrella continental Albinism Association called AFRICA UNION OF PERSONS WITH ALBINISM (AUPA), of which it is a founding member,"

The press statement was in reaction to a letter purported to be from an organization calling itself Association of African Albinos (AAA), expelling Mr Moses Foh-Amoaning, who is a person with albinism, from the association for his stance against the Lesbian, Gay, Bisexual and Transgender community in Ghana.

The group considers the Executive Secretary of the National Collation of Proper Human Sexual Rights and Family Values, Mr Foh-Amoaning's fierce resistance of the LGBTQIA+ movement in Ghana as a contravention of the values and principles of their organization.

In the letter which has gone viral on social media, the AAA said, "we have officially denounced and expelled Mr Foh-Amoaning from our association for his violation of human rights and championing of hate".

The association which claims to be based in Dar es Salaam, Tanzania, also added that "we write with sincere apologies to the LGBTQIA+ community of Ghana and across the continent that we are very sorry to hear and witness the inhuman treatment, hate and violence propagated by a member of a highly vulnerable and marginalized community who should have used his privilege to fight for the rest of us but unfortunately persecuting other marginalized groups."

The letter has generated debate on social media with calls on the albinism community in Ghana to confirm the news about Mr Foh-Amoaning's expulsion. But in the press statement by GAPA, the association did not only deny membership of AAA but also disclosed that Mr Foh-Amoaning was not a member of their fraternity

GAPA further stated that, while it condemned discrimination of all forms, it was committed to the protection of human rights that are within the confines of the laws of Ghana.

There are doubts about the existence of AAA and the said letter of expulsion, given the fact that Mr Foh-Amoaning is not even a member of the albinism association in Ghana. The Ghanaian albinism community is wondering how he would be a member of an international organization, especially when such organizations are not joined by individuals, but national associations.

Another thing that casts doubt about the existence of the group is that, all over Africa, persons with albinism do not like to be called "Albinos". They say, that puts focus on their condition instead of their personalities first. They, therefore, encourage people to refer to them as persons with albinism.

The question is being asked how an association that is supposed to be by persons with albinism would bear the name Association of African "Albinos".