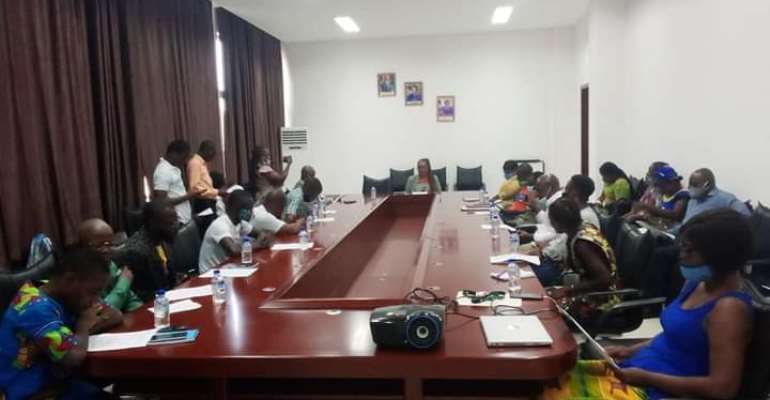 The Ministry of Gender Children and Social Protection along with The Child Protection Network (CPN) of Liberia on Tuesday, February 23 raise concerns over the slow pace of redress regarding three ongoing cases, and other violence meted against children across Liberia, which accordingly, includes rape, trafficking, neglect and exploitation.

Reading the statement on behalf of the body, Deputy Gender Minister of Children and Social Protection, Hon. Lydia Mai Sherman said: "As a body that is clothed with the responsibility to cater to the welfare of all children in Liberia, it has come to our knowledge that the wave of child abuse is on a whopping increase, which is unacceptable, and we as a network, call for speedy investigation and prosecution of all alleged perpetrators."

The CPN cited the Morris’s Farm, Wood Camp Community incident, as well as the Palm Beach Community, ELWA and the 22, alleged trafficked children from Gbarpolu County as reasons that prompted the issuance of a position statement.

The group recounted in it's strong worded position statement, that on December 13, 2020, they woke up to the death news of a five (5) year old boy named, Joseph K. Kollie, who they noted, met his untimely death in the Morris’s Farm Community in Paynesville.

According to the CPN, it is yet to be established who might have murdered the child, as the police apprehended the security guard identified as (David T. Akoi: the only suspect so far), of the deceased grandfather’s compound.

"According to officers of the Liberia National Police (LNP) who previously investigated the case, the suspect was charged with Circumstantial Murder, a homicide without malice aforethought, which the CPN considers less in weight."

"Furthermore, on February 14, 2021, the CPN became troubled with another news of the untimely death of 11 year old Jerome Brown in the Palm Beach Community, who was allegedly confined and starved to death by his biological father and step mother. Thanks to a strong collaboration of the MOJ and MoGCSP, the case is now in court and we look forward to a speedy and logical conclusion."

The CPN further said: "Additionally, 22 children were allegedly trafficked from Gbarpolu County to Margibi County on January 29, 2021. Notwithstanding, the children were rescued by the Liberia Immigration Service (LIS) and turned over to the Ministry of Gender, Children and Social Protection. The children are presently in our acre while we await investigation to be concluded."

According to the Child Protection Network, the Government of Liberia was among 12 countries that signed the Declaration on Securing Children’s Rights on December 2, 2017, at the International Child Rights Conference in Zanzibar on sharing best practice and policy on child protection, justice and participation, convened by the World Future Council (WFC), as well as many other legal instruments that call for the protection of children.

They indicated that PILLAR 1 of the PAPD, (Power to the People) 2. 4.2, highlights Children protection as a key priority of the Government of Liberia, which is a commitment to implementing the Child Welfare and Protection protocols.

"Therefore, the Ministry of Gender, Children and Social Protection and the Child Protection Network (CPN), condemn the murder, trafficking and all other abuses of children across Liberia."

Meanwhile, the body has released a three count recommendation to the Ministry of Justice (MoJ).

In count one, the CPN called for murder charges against the suspected perpetrators of the two murder cases involving Joseph K. Kollie and Jerome Brown; while count two recommends speedy trail of all cases of Child abuse, including the trafficking of the 22 children.

In count three, the body recommended that the Ministry of Justice make public all investigative findings surrounding the above listed cases.

Fix 'dumsor' or Twitter will ditch Ghana for Togo – ASEPA to...
37 minutes ago