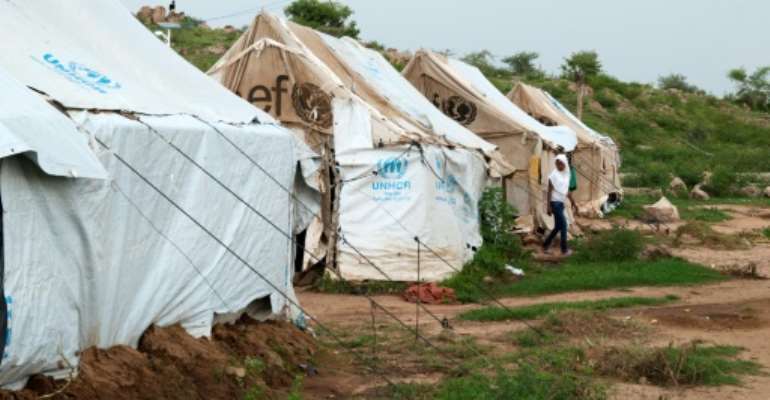 Ethiopia's Hitsats refugee camp, along with the camp of Shimelba, was allegedly destroyed by Eritrean and Ethiopian troops. By VINCENT DEFAIT (AFP/File)

The UN's special rapporteur on Eritrea on Wednesday demanded a swift, independent investigation into allegations that the country's troops attacked refugee camps in neighbouring Ethiopia and abducted Eritrean asylum seekers.

Reporting to the United Nations Human Rights Council in Geneva, Mohamed Abdelsalam Babiker said he was concerned for thousands of Eritreans who were in two camps in Ethiopia's northern Tigray region -- now allegedly destroyed by Eritrean and Ethiopian troops.

There were 96,000 Eritrean refugees living in four camps in Tigray before Ethiopian Prime Minister Abiy Ahmed launched military operations against leaders of the region's ruling party in early November.

Babiker said two of the camps, Hitsats and Shimelba, which hosted more than 25,000 Eritrean refugees, "were allegedly destroyed in attacks carried out by Eritrean and Ethiopian troops" between November and January.

He said he had received first-hand accounts of allegations of "extra-judicial killings, targeted abductions and forced return of Eritrean refugees and asylum seekers to Eritrea, allegedly by Eritrean forces".

Babiker said many such refugees had now been jailed in Eritrea.

"Such allegations need to be investigated promptly and thoroughly by independent mechanisms," he said.

"I request the Eritrean authorities to give me full access to refugees and asylum seekers allegedly held in various prisons inside Eritrea."

No progress on rights

The Sudanese rapporteur, who took up his role in November, said there was "no concrete evidence of progress or actual improvement" of the human rights situation inside Eritrea, in his first oral update to the council.

Special rapporteurs are mandated by the council but do not speak for the UN.

"The country lacks rule of law, a constitution and an independent judiciary to enforce the protection of and respect for human rights," Babiker said.

"Eritrea continues to have no national assembly to adopt laws, including those regulating fundamental rights and the right of the Eritrean people to participate freely in the public life of their country."

The secretive East African nation "continues to impose restrictions on religious freedoms", he added, urging the authorities to release anyone being detained due to their faith.

On the issue of political prisoners and prisoners of conscience, "there has been no progress", he said, decrying the arbitrary detention of political opponents "in secret prisons without charge or trial".

In December, the rapporteur requested a visit to Eritrea in January. He has yet to receive a reply.

Responding to the rapporteur's update, an Eritrean official told the council that his country had been treated "unfairly and unjustly".

He said the report was an attempt to paint a "bleak picture of Eritrea and demonise the government".

He also said it was high time for the Human Rights Council to "end the unwarranted ritual of annual harassment of Eritrea".