W/R: Community calls on authorities to fix their school building in Brayere Agya 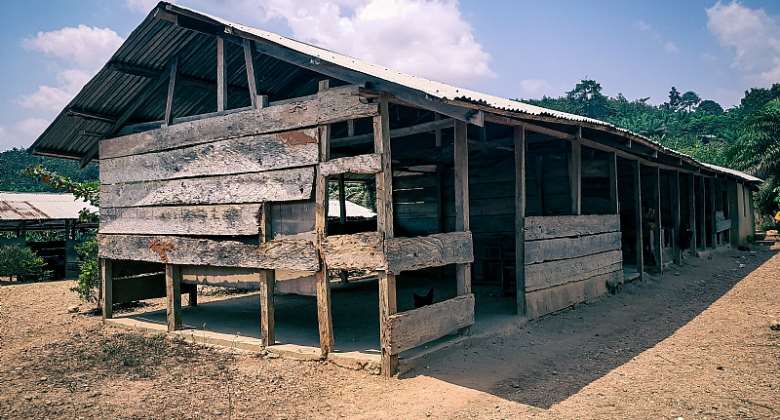 Residents of Brayere Agya, a farming community in the Prestea Huni -Valley Municipality of the Western Region, appear to be fed-up after persistent calls on the authorities in the municipality to put up a proper school building for them.

The community which is about fifty minutes drive from Bogoso, the capital of the municipality is worried over the bad situation their kids continue to be in, although calls have been made to the municipal authorities several times for intervention but to no avail.

The three structures which are being used as school accommodate nursery to Junior High School pupils. However, because of the bad nature, the pupils say, they feel very uncomfortable studying since the building pose as a threat to them.

Upon a closer look at the 8-year-old wooden structures put up by the community, one will see the wooden pillars been eaten by termites whiles others are hanging, clearly indicating that the structural integrity of the facility is weak.

The Assembly Member for the area, Mr Charles Yeboah, who appeared despair when narrating the issues about the school to this reporter stated that he has always raised the situation at many assembly sittings but nothing has been done to improve the situation.

“On several occasions, I raised this matter at assembly meetings. I can tell you that, you will find this in every report at the Municipal Assembly”, he said.

Parents in the community say, they have been compelled to remove their wards from the school where teachers are also not enough for the school. Adding, that has made teaching and learning ineffective at the school.

Modernghana.com checks at the school indicate that its population has reduced from more than 300 to about 250 pupils. This is so because parents have now enrolled their wards in schools in nearby towns.

The Assembly Member Mr Yeboah, is again appealing to the authorities to come put up with a proper school building for the community.