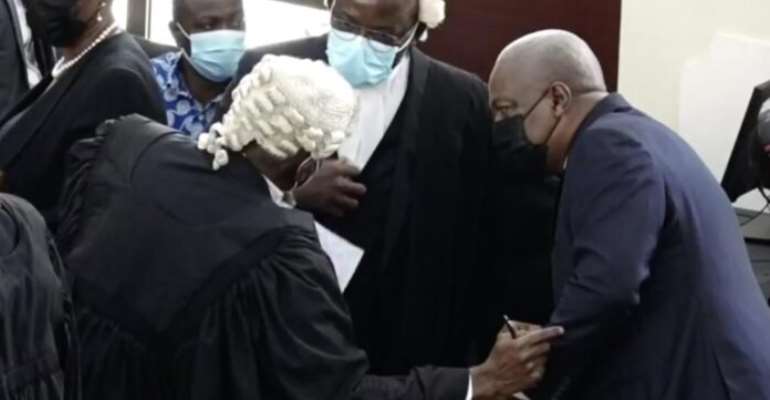 Lawyers for the 2020 NDC Presidential Candidate John Dramani Mahama have reiterated that the Petitioner’s own figures to the Supreme court in the petition are inconsequential in the determination of the case.

“The fact that Petitioner is not indicating in this Petition what he or the other candidates should have obtained compared to numbers declared by 1st Respondent cannot lead to a conclusion that the declaration by the Chairperson of the 1st Respondent is constitutional,” the Petitioner’s Lawyers said in the written closing address filed by the lawyers in compliance with the Supreme Court’s orders.

According to them, they have successfully proved that no candidate obtained more than 50% of the votes cast in the 2020 presidential elections.

They have thus prayed the Supreme Court to order the Electoral Commission to organize a run-off between President Akufo-Addo and Mr Mahama.

“The case of the Petitioner here is simply that, in addition to the fundamental Constitutional infractions committed by Mrs Jean Adukwei Mensa, the Chairperson of 1st Respondent and Returning Officer of the Presidential Election, the figures announced in the declaration she herself made on 9th December 2020, no candidate got more than 50% of the valid votes cast and, as a constitutional consequence, a run-off election would be required. Petitioner’s own figures are not relevant to determining whether that claim is well-founded or not.”

Lawyers of former President John Mahama filed their closing addresses in the election petition as was ordered by the Supreme Court on Monday.

This means the way is cleared for the Supreme Court to decide on the Petition on March 4, 2021.

The closing addresses are the summary of all that have transpired in the course of the hearing and what each of the parties wanted as per their case before the court.

The Respondents, Electoral Commission and Nana Addo Dankwa Akufo-Addo filed theirs on February 17, 2021.