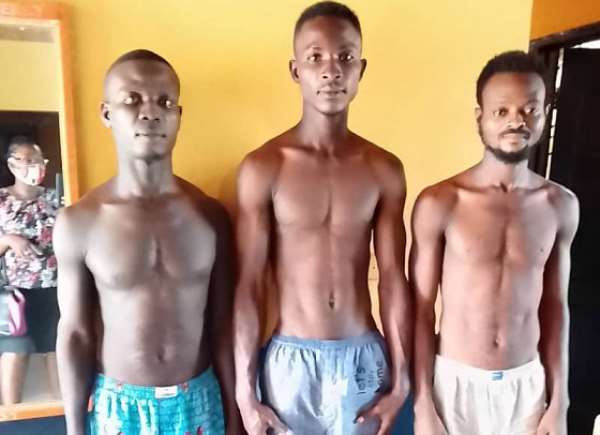 Three persons with one at large have been arrested by the Accra Regional Police Command for attempted robbery.

They have been identified as Prince Donkor, 29, Ebenezer Kisseh Otutey, 29, and Sonu Darko Richmond, 31.

The police have said the three together with one person currently at large, had attempted to snatch the vehicle of an Uber driver from him on the Tema Motorway when a police officer on motorbike patrol accosted them.

She said the suspects together with one other who was currently at large hired the services of an Uber driver in charge of a Cruize Saloon car with registration number GG 3503-20 from Tetteh Quashie roundabout to Ashaiman.

“On reaching a section of the motorway, the four purported passengers and now suspects started struggling with the driver in an attempt to snatch the vehicle from him,” she said.

According to DSP Tenge, in the process of the melee, a police personnel attached to the Community 18 Police Station who was on a motorbike visibility, accessibility and confidence building patrol moved to the scene and arrested the three suspects at gun point but the fourth person managed to escape.

She said the suspects were brought to the station for questioning, but when a search was conducted on them, there were no weapons or implements on them.