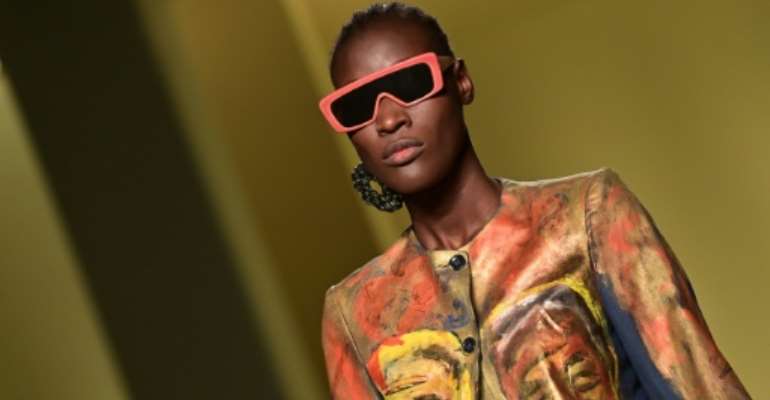 A model presents a creation by Senegalese fashion designer, Pape Mocodou Fall, aka Mokodu from the collective "Black Lives Matter in Italian Fashion" in Milan during the filming of the fashion show that opened the Milan Fashion Week on Wednesday.. By MIGUEL MEDINA (AFP)

Last minute touches on a frilly white dress, a final coat of powder and it's showtime for the Black Lives Matter-inspired collective making history at Milan Fashion Week.

After a years-long battle to improve diversity on the Italian catwalks, a group of five black designers made their on-schedule debut Wednesday by opening the women's Fall/Winter fashion shows.

All this season's shows are pre-recorded due to coronavirus, but AFP was given exclusive access to their preparations last week at Milan's Circolo Filologico library, not far from the Scala.

Is opening fashion week a victory? "I'd say it's a first step," said Michelle Ngonmo, who chose those to include in the debut show.

She is a co-founder of the collective dubbed Black Lives Matter in Italian Fashion, named after the anti-racism movement that swept the United States last year and reached Europe.

Longer term, "we have to make the society we live in understand that the 'Made in Italy' label is not a question of skin colour but of know-how", she told AFP. 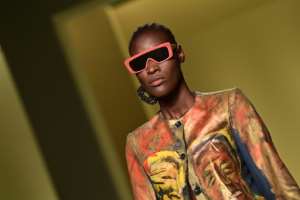 Burundi's fashion stylist Fabiola Manirakiza, founder of the fashion house Frida-Kiza, from the collective "Black Lives Matter in Italian Fashion" poses in Milan during the filming of the fashion show that will open the Milan Fashion Week. By MIGUEL MEDINA (AFP)

On an individual level, opening Milan Fashion Week is a dream come true for the designers, all Italian but born in various African countries.

Claudia Gisele Ntsama, a 29-year-old from Cameroon, admitted being "a little nervous" as she fussed with the eco-friendly looks in pastel tones made entirely from hemp.

Nearby, fellow designer Fabiola Manirakiza played with silk in floral prints for her brand, Frida Kiza.

"In general, we are ignored, we are invisible. But this is a rebirth," exclaimed Manirakiza, whose parents were killed in 1972 in ethnic violence in Burundi.

Ngonmo co-founded the collective last year alongside designers Edward Buchanan and Stella Jean, who has been the only black member of the National Chamber for Italian Fashion since 2016.

It participated in Milan's Fashion Week in September, with a video featuring the same five designers, but that "was just a teaser," explained Mokudu Fall, 45, from Senegal.

"Now we're on the official calendar, I've been dreaming about it since I've been in fashion," Fall said.

In a nod to his African origins, his collection -- "works of art that I transpose on clothes" -- featured satin lions and zebras in gold and red, his favourite colours.

Previously, the presentation of the collections of black designers was confined to Afro Fashion Week, which launched in Milan with a show in 2016.

"For years we came up against a wall of silence when knocking on the door" of the fashion chamber, said Ngonmo, the founder of Afro Fashion Week.

The catalyst for change was the death last year in US police custody of an African-American man, George Floyd, an event that triggered anti-racism protests across the US and the world. 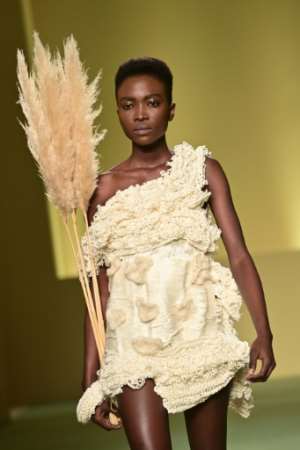 A model presents a creation by Cameroonian fashion stylist Claudia Gisele Ntsama from the collective "Black Lives Matter in Italian Fashion" in Milan during the filming of the fashion show that will open the Milan Fashion Week. By MIGUEL MEDINA (AFP)

Carlo Capasa, head of the fashion chamber, acknowledged that the death of Floyd was "an important moment of awareness for the whole world".

Thanks to the collective, "we have become more aware of this theme" of racism, he said, adding: "In fact, we could have done more."

The chamber now supports the collective through tutoring on design and business skills, and finances the five designers' fashions show and the collections of three of them.

"As a woman and an immigrant in Italy, I had to work twice as hard to prove that I have the same skills as the others," said Joy Meribe, a 43-year-old born in Nigeria.

Her collection -- dresses and skirts in 100% organic silk, yellow, Atlantic blue and dark red -- was made entirely in Italy, like all the others.

Buchanan, an African-American who has been in Italy for 25 years and co-founded the collection, said he has experienced racism on a daily basis.

He said people often assume that he makes T-shirts, or other garments for hip-hop fashion.

"They find it hard to imagine that I work in the luxury sector," he said. 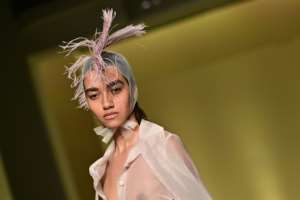 A model presents a creation by Nigerian fashion stylist Joy Ijeoma Meribe from the collective "Black Lives Matter in Italian Fashion" in Milan during the filming of the fashion show that will open the Milan Fashion Week. By MIGUEL MEDINA (AFP)

But this first official show of the association gives hope to some.

"It's a dream come true," says Karim Daoudi, 27, a designer born in Morocco.

Of his shoes featured in the show, he said: "I hope they will go around the world."