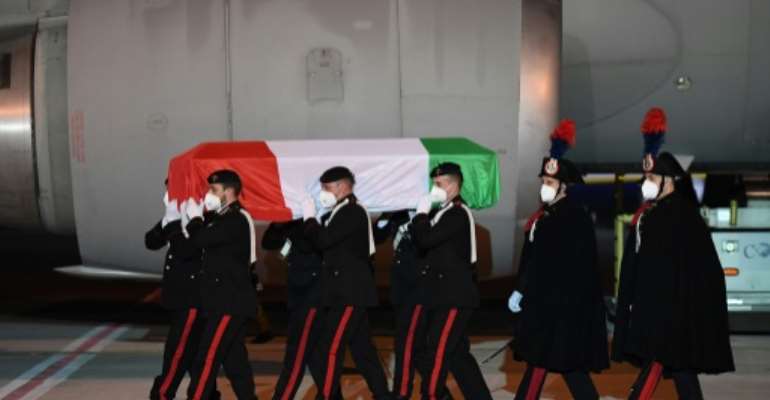 The body of the Italian ambassador killed in the Democratic Republic of Congo has arrived back in Rome. By Handout (ITALIAN FOREIGN MINISTRY/AFP)

The body of the Italian ambassador killed in the Democratic Republic of Congo arrived in Rome late Tuesday, as Rwandan Hutu rebels denied accusations they were behind the attack and instead blamed the armies of the DRC and Rwanda.

Luca Attanasio, 43, died on Monday after a World Food Programme (WFP) convoy was ambushed in a dangerous part of eastern DRC. 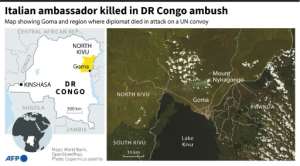 Map of DR Congo's eastern Goma region where Italy's ambassador was killed in an attack on a UN convoy. By Patricio ARANA (AFP)

DRC President Felix Tshisekedi and his wife had earlier made a "condolence visit" to the family at the Italian ambassador's residence.

The DRC's interior ministry on Monday blamed the killings on "members of the Democratic Forces for the Liberation of Rwanda (FDLR)" -- a Rwandan Hutu rebel group that has plagued the region for more than a quarter of a century.

But the FDLR rejected the allegation, blaming the Rwandan army and the Armed Forces of the Democratic Republic of the Congo (FARDC) in a statement received by AFP Tuesday.

It said the ambassador's convoy was attacked near the Rwandan border, "not far from a position of the FARDC". 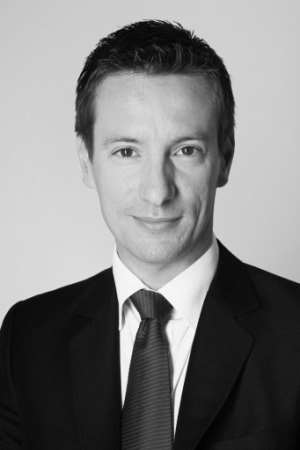 Attanasio, a father of three, had been representing Italy in Kinshasa since 2017. By Handout (ITALIAN FOREIGN MINISTRY/AFP)

"The responsibility for this despicable killing is to be found in the ranks of these two armies and their sponsors who have forged an unnatural alliance to perpetuate the pillaging of eastern DRC," it said.

Authorities in both countries have not reported the presence of any regular Rwandan troops in the DRC.

An expert at the Kivu Security Tracker (KST), a US monitor, told AFP the Hutu rebel group, however, has a known presence in the region.

"The FDLR are near the place where the attack took place. It's in the realm of possibility that the Rwandan rebels are responsible," the expert said, speaking on condition of anonymity.

Scores of militias roam the DRC's four eastern provinces, many of them a legacy of wars in the 1990s that sucked in countries around central-southern Africa and claimed millions of lives.

Some of the FDLR's founders were involved in the 1994 Rwandan genocide during which the Hutu majority slaughtered 800,000 people, mainly Tutsis but also Hutu moderates.

The group is opposed to the current Rwandan government, but has not launched any large-scale attacks in Rwanda since 2001.

Monday's attack occurred north of the North Kivu capital of Goma on National Highway 2 -- a road that runs through thickly forested, mountainous terrain next to the porous border with Rwanda. 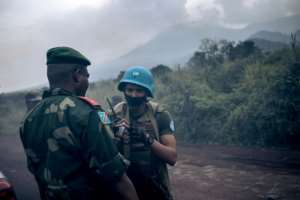 Congolese and UN forces secured the scene of the attack. By ALEXIS HUGUET (AFP)

The world-renowned Virunga National Park, a UNESCO-listed wildlife reserve that is a haven for critically-endangered mountain gorillas, straddles the area.

Tshisekedi's office said Attanasio had arrived in Goma on Friday morning aboard a MONUSCO plane.

He left on Monday morning in a two-vehicle WFP convoy heading for Kiwanja, in the Rutshuru area, accompanied by his bodyguard and WFP workers, it said.

The convoy was ambushed three kilometres (1.9 miles) from their destination by six assailants, armed with five AK-47 assault rifles and a machete.

"They proceeded by firing warning shots before forcing the people in the vehicles to get out and follow them into the depths of the (Virunga) park, which they did by shooting dead one of the drivers to create panic," the president's office said.

Park rangers and army troops nearby heard the noise and pursued the attackers.

"Five hundred metres (from the site of the ambush), the kidnappers fired point-blank at the bodyguard, who died on the spot, and at the ambassador, hitting him in the abdomen," the presidency added.

After the Italian government expressed shock and outrage at the attack, newspapers in Rome on Tuesday raised questions about security preparations for the trip.

Foreign Minister Di Maio is scheduled to speak to lawmakers about the attack on Wednesday.

The DRC interior ministry said Monday that security services and provincial authorities had not been informed of the trip in advance.

"(They) were unable to provide special security for the convoy or come to its aid because of a lack of information about their presence in this part of the country, despite its reputation for instability," it said.

But the WFP said the attack "occurred on a road that had previously been cleared for travel without security escorts".

A UN humanitarian official in the DRC, who spoke on condition of anonymity, said that this meant the convoy had to be a minimum of two vehicles.