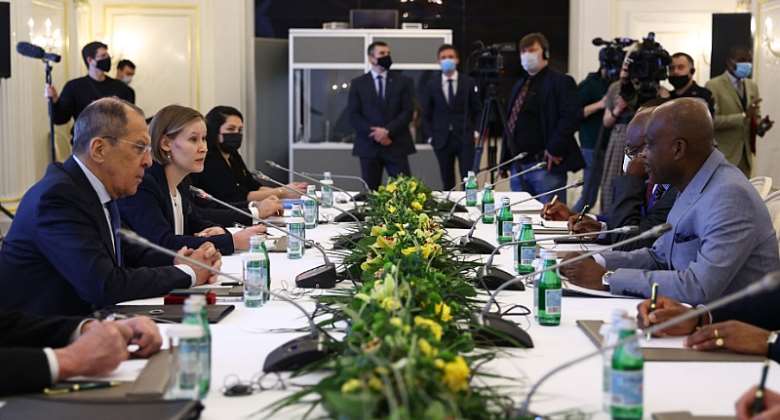 According to reports, Professor Dussey's visit was on the invitation by Moscow and came on exactly one year after their last meeting on February 15, 2020, in Munich, the third-largest city in Germany.

After their closed-door discussion, Lavrov told the joint news conference that there is a mutual interest in intensifying and deepening the entire scope of bilateral ties, including trade, the economy and investment, and have agreed to look for specific opportunities for joint projects in areas such as energy, natural resources, infrastructure, transport, and agriculture.

Regarding issues on the African continent, Lavrov re-emphasized that African problems (of which there are many) require African solutions. "We strongly support the African Union, the G5 Sahel, and the sub-regional organizations in Africa, in their efforts to resolve numerous local conflicts and crises. We specifically focus on supporting the fight against terrorism, which poses a real threat, including for our friends in Togo and other coastal countries in the region of the Gulf of Guinea," he said.

In fact and as always, Lavrov reiterated Russia's commitment to continue to act actively in pursuing peace and, to this end, called for the peaceful settlement of all kinds of differences, and reaffirmed support for sustainable development there in Africa.

Regarding issues from the last summit held in Sochi, Lavrov stressed: "We are interested in developing the resolutions of the Russia-Africa summit. We spoke in detail about the implementation of these agreements. The coronavirus pandemic has required adjustments. Nevertheless, the results on implementing the Sochi agreements are obvious. This year we will actively continue these efforts."

The Association for Economic Cooperation with the African States was created in Russia following the 2019 Sochi summit. It includes representatives from the related departments and major Russian companies. The Russia-Africa Partnership Forum, which is a political association, was created, its secretariat is located at the Russian Foreign Ministry. The primary tasks of the Russia-Africa Partnership Forum includes preparation and organization of the next Russia-Africa summit scheduled for 2022. The venue to be chosen by African leaders.

"We are still slightly behind other states, but trade between Russia and the African countries has been growing quite rapidly lately. I think we will soon make up for the time we lost in the years when, at the dawn of the new Russian statehood, we were too busy to maintain proper ties with Africa. A very strong foundation was laid in Soviet times, though," Lavrov said further at the news conference about the current situation with relations between Russia and Africa.

It has always been the wish of both Russia and Africa to have an excellent quality of cooperation and partnership relations between the two regions and to diversify and deepen them as best as possible in order to provide an appreciable geopolitical influence and strategic power balance in Africa.

Russia and Togo, as with many other African countries, have had long time-tested relations over the years. The most recent high-level meetings were between Russian President Vladimir Putin and Togolese President Faure Gnassingbe during sidelined bilateral meeting in October 2019, when Gnassingbe participated in the Russia-Africa summit in Sochi, and on the sidelines of the BRICS summit in Johannesburg in July 2018.

With an estimated population of about 7.9 million, Togo is among the smallest countries in Africa. Its economy depends highly on agriculture. Togo pursues an active foreign policy and participates in many international organizations. Relations between Togo and neighboring states are generally good. It is particularly active in West African regional affairs and in the African Union. *Kester Kenn Klomegah is a versatile researcher and a passionate contributor, most of his well-resourced articles are reprinted elsewhere in a number of reputable foreign media.