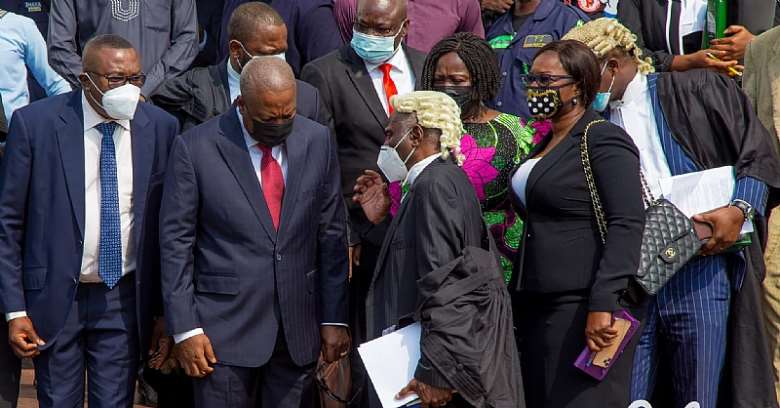 I have come to admire the Anin-Yeboah Court for the amazing speed with which it has dispatched Mr. Tsatsu Tsikata’s hollow, vexatious and unmeritorious motions. That kind of speed and efficiency must characterize all cases in the courts in Ghana and cure the tendency where cases have clogged the court system throughout the country.

Not to count the futile requests for review of the court’s prior decisions by Mr. Tsikata, I have counted at least seven of such hollow applications and motions presented to the Court for decision. But for each of these motions, the Supreme Court has returned quick decisions with detailed legal arguments written in a spate of a couple of hours. I really don’t know how these law lords went about performing this amazing feat;; but I have not seen any such speed and efficiency applied to a case either in Ghana or here in America. Anybody will be hard put to it finding any court in any country return such detailed judgments to any motions or cases with such amazing speed.

Indeed, here in Texas, most of such motions would have been laconically disposed of with this sentence:

“After arguments by counsel and the review of the evidence, it is the view of the Court that the motion be granted/denied.”

And the other funny thing is that the party making the motion gets to attach his judgment order to the motion. If you have a case in the District Court for example, you attach these one-line judgment orders which may be adopted by the court with little or no variation. If any detailed judgment is required because of the nature of your case, the prevailing party gets to write it. For example, if there is a judgment in a divorce case, the prevailing lawyer gets to write all of that judgment order for the signature of the judge. Of course, there are boilerplate templates that are referenced in the law books. So you refer to these books and merely fill in the information specific to your case for the signature of the judge.

It is only at the appellate levels that you have some reasoned verbiage about your particular case. Otherwise even at the Supreme Court, you will take time to write your brief only for the law lords to determine whether you have even reached the threshold for your adversary to answer. Otherwise it is summarily dismissed without any response or reasoning from the opposing party. Remember again that the only stage of reasoning is always at the appellate level, nowhere else. Only the judges here get to discuss your case and give any comprehensive reasoning underlying their decision. At the Supreme Court level, your matter is routinely and peremptorily dismissed if it doesn’t go through the narrow threshold of the review process.

In this particular instance of the electoral petition in Ghana, the Court has gone through detailed reasoning to support the facts with the law. And the judges have done all that in a matter of hours after the arguments and returned to read out a whole impeccable judgment in open court. Now, that is exceptionally good and goes to show that the law lords are very competent in the law, the literature of the law, and the orthography of the law. For a country known for its inefficiency in several areas, the ability of the judges to return this quality of work within this spate of time is quite amazing and must be commended.

And this kind of competence should also reflect the work of the lower courts. There are instances where some matters pend unresolved before these courts for decades. Some cases even instigate superstition: A judge once told me that upon being posted to a certain area, he was warned not to touch a certain case, or else he would die. He did not touch it.

My father was a litigant, and I remember going to court with him when I was a mere boy and seeing five septuagenarians contesting over a land case. I asked my father why such old people should be concerned about a small piece of land when they were getting ready to die, whereupon he disclosed to me that they had been in litigation over the piece of land since they were very young and that they were still at it in their old age!

There are several instances of cases lasting for decades in our courts, and so my argument is that if it is possible to marshal the laws and facts within a short spate of time in the Supreme Court to resolve a matter, then the practice should percolate down to all levels of the court system to make cases quickly disposable throughout Ghana’s court system.

Now it may appear facetious that judgment orders here in the USA tend to be counsel-dependent or even template-propelled, but it is all because of speed and efficiency. Cases can begin here in this country and be disposed of within a matter of weeks. And whereas Ghana is not under any obligation to follow what happens here in the USA, we can reach a happy balance where more and more cases could be disposed of with more speed and efficiency.

In that instance, what we will need is for the judges to be up reading and writing, and applying top-notch technology in their research and reasoning to give competent judgments like those we are witnessing within Ghana’s Supreme Court.