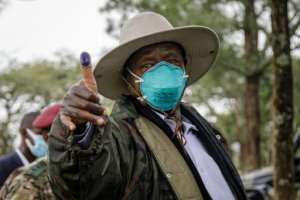 Part of being an adult is accepting things that you wish weren't true. For a few years now, I have had to accept some things that I don't like. That's why I'm not surprised that Bobi's going to court has come up with double zeroes. Basically, nothing much has been accomplished by the opposition in the last four years.im having a hard time finding a silver lining in Bobi's political moves. He has been involved in a presidential election and his moves since, don't much comport with reality.

Bad guys don't play by the rules. That's what makes them bad. A bad man organises an election knowing that you won't beat him even if you try. He then puts you under house arrest after elections because it's the right move to make under the circumstances. Then he persuades you( through foreign ambassadors) to go to court to make you feel important.

Then he uses the court to humiliate you again because you deserve it-- yes, you don't respect elders, like Kiiza Besigye, who warned you about courts and elections but you never listened. Then finally, you have no choice but to withdraw the presidential petition because it's the right thing to do. Then you start thinking about your own future, and that is when you start calling him privately to make deals.

A good president can stand up to external pressure. It's the internal pressure that can wear him down. For instance, Kidnappings are bad but I knew something like that would happen after the elections-- it's part of the post-election 'clean-up'. Winning isn't enough for bad guys -- they like crushing things.

Sometimes bad guys do good things. Yes, Museveni has done a lot of good things and he is never given credit because of poor public relations. Pinochet shut down 33 cocaine labs and arrested 346 drug dealers, and he had them all killed.

Best way to make a bad story go away is to come up with a better story. There was a bad story going on about kidnappings and prisoners of the election, but that was immediately replaced by a discussion on bulletproof cars and billboards in New York, and I was mesmerized by the kind of opposition we have now. Museveni has worked hard to be where he is. You have to be careful with people like that. He is like a villain in a horror movie, like Michael Myers. He always comes back in time to ruin your life. He is capable of setting up the public to support a man who looks to be genuinely opposing him but when he's remotely controlling him.

Bad guys tend to have eyes and ears in their enemy camps-- they are like spider webs. Museveni has listening posts in FDC,DP, UPC and NUP, and I can bet he even knew about the petition withdrawal before we did. The country is now like the Soviet Union with some sunshine instead of winter.

Negotiate with your enemy while trying to weaken him at the same time. That is going to be his next step. He will send emissaries, if he hasn't already done so, to get some elements in opposition to work with him. There's a NUP case in court where original owners want it back--that should be enough for leverage in negotiations.

As for Bobi, he was like a storm, and almost everyone was floating in his awake--some of us more than others. Some even became pretentious that the political status quo has changed, simply because Bobi was a regular on CNN, Aljazeera, BBC and other international channels. Yes, for Bobi-- it was a step up- it made him famous internationally but it also exposed his inadequacies. The debate on social media moved from policies, or where we want Uganda to be, to Bobi himself, and it was sad to watch.

Now people are urging him to try again in 2026, as Besigye has tried since 2001. However, waiting in politics is lethal. Those who wait are quietly replaced. It's like long distance relationships-- a lot can happen in 5 years. I even don't know how Besigye managed it for so long-- he kept the opposition rejuvenated every after the election. Now, our friends in NUP are ineffectively trying it, too, with a US owned ship(emeeri) in Mombasa ready to attack Museveni--it sounds like grandiose to me.

You're an 'irresponsible' bunch for 'running away' from own ...
28 minutes ago

COVID-19: Omicron not detected in Ghana – GHS
32 minutes ago