Election petition: Rule according to your conscience – Tsatsu to judges 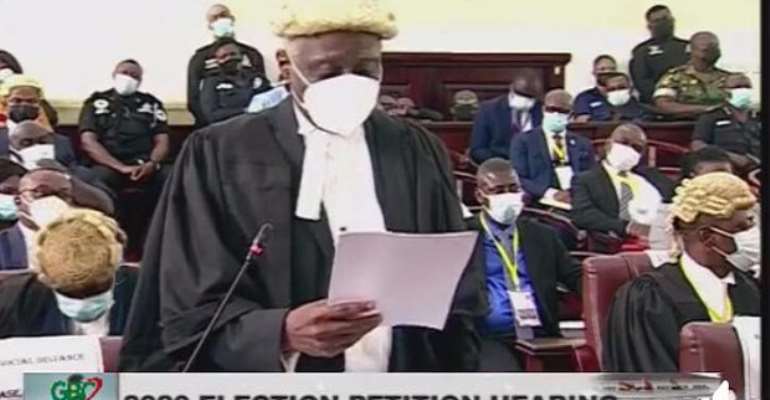 Lead counsel for the petitioner in the ongoing Supreme Court trial over the 2020 presidential election Tsatsu Tsikata has appealed to the judges to rule on the matter according to their conscience.

“May each of your lordships decide in accordance with your conscience and your judicial oath,” he told the court during his review application for leave to reopen their case.

He also cited a verse from Hosea 8:7 in the Bible to make his case.

“For they sow the wind, and they shall reap the whirlwind. He that have ear let him hear”.

The Supreme Court on February 16, 2021, chaired BY Justice Kwasi Anin Yeboah dismissed the application in which the Petitioner was asking to be allowed to re-pen his case and subpoena the Chairperson of the Electoral Commission (EC) to mount the witness box as his “hostile witness.”

This was after lawyers of the EC, the 1st Respondent and Nana Addo Dankwa Akufo-Addo, 2nd Respondent waived their rights to adduce evidence.

The unanimous ruling of the apex court was to the effect that, the Petitioner has not demonstrated any exceptional grounds that should warrant the Court to exercise its discretion in his favour.

However, in a motion for Review which has been tabled for hearing on Monday, February 22, the Petitioner in his affidavit in support of the motion stated that the fundamental errors have occasioned a miscarriage of justice against him.

PLEASE TAKE NOTICE that this Honourable Court shall be moved by Counsel for and on behalf of Petitioner/Applicant herein (Applicant), praying for an order of the Court reviewing its Ruling delivered on 16th February 2021 in respect of an application by Applicant to re-open his case; UPON the grounds set forth in the Statement of Case and the accompanying affidavit, and for such further or other orders as the Honourable Court may deem fit.

I am the Petitioner and Applicant herein. The facts in this affidavit, unless otherwise stated, are within my personal knowledge, information or belief.

On 16th February 2021, this Court delivered a unanimous ruling refusing an application by me to re-open my case for the purpose of causing a subpoena to be issued and directed at Mrs. Jean Adukwei Mensa to appear in court to be cross-examined by my Counsel. The ruling is attached to this affidavit and marked as Exhibit “3RD REVIEW 1”.

In respect of Exhibit 3rd Review 1″, I am advised by Counsel and verily believe that the Court made fundamental errors of law, including the ruling being per incuriam of constitutional provisions, statutes and previous decisions of the Supreme Court.

Among these errors, I am advised by Counsel and verily believe, is an error whereby the Court subordinates a provision in the Evidence Act to a rule in subsidiary legislation by the Rules of Court Committee.

Attached herewith marked as Exhibit 3 RD REVIEW 2″ and 3 RD REVIEW 3″ are the two affidavits of the Chairperson of 1 st Respondent, Mrs. Jean Adukwei Mensa, whose legal effect (by virtue of the Evidence Act), the ruling attempts to sidestep by recourse to subsidiary legislation.

The fundamental errors which have occasioned a miscarriage of justice against me are set out in the Statement of Case herewith attached.

I am advised and verily believe that they constitute exceptional circumstances that warrant the Court reviewing its own decision.

WHEREFORE I swear to this affidavit in support of the application herein.