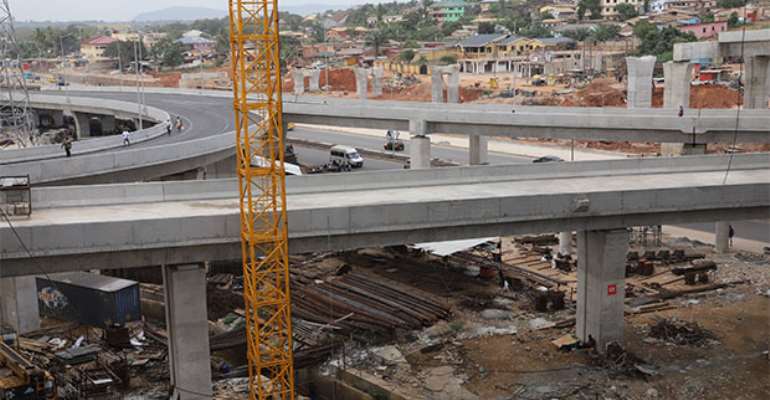 There is no gainsaying that the Pokuase Interchange is a major addition to the country's skyline.

Being the first of its kind in West Africa and second in Africa, the four-tier engineering marvel besides easing or eliminating the vehicular logjams which characterise that segment of the Accra-Kumasi highway adds to our infrastructural status.

Of course the driving impulse for the project has been the easing of traffic logjams and dousing the inconvenience endured by motorists and pedestrians alike.

For motorists plying the Kumasi to Accra route and vice versa, it will remove the inconvenience caused by the traffic logjam waiting at Pokuase and thus reducing the time it takes them to hit their final destinations.

An additional hour or a little more to the time it takes to arrive in Accra or to hit the Amasaman end of the highway en route to Kumasi is a relishing impetus.

At the time the project was touted on the public space, political cynics regarded it as a pipe dream. Fortunately, like others announced by the President and implemented, it is coming to fruition and soon, in April.

In its 70% completion stage, the April date earmarked for total opening of the project is not in doubt.

Even before all the tiers are functional, we are beginning to witness a lessening of traffic jam on the stretch.

With so much funds going into the project, it behoves on all stakeholders to maintain it through necessary periodic maintenance where necessary.

Many roads have gone into states of disrepair simply because those in charge of maintaining them have not lived up to expectation.

Those habits by motorists and others which affect the integrity of road projects should be avoided by all means.

Law enforcement agents whose responsibility it is to ensure that traffic logjams do not occur must ensure that the interchange lives up to the billing of making vehicles move swiftly and without holdups.

Commuter vehicles should be provided a better place for offloading passengers and loading. The situation where these are done without considering the logjams they can create should not be allowed.

It would be preposterous if at the end of the day the traffic logjams which such capital intensive projects are intended to obviate fail to do so simply because those responsible for enforcing the law sleep on duty and motorists display recklessness and irresponsibility.

We wish to call the attention of the Highway Ministry to the bad state of the road from the foot of the interchange and leading to the toll booth after Amasaman. Driving through one of the tiers and landing immediately on a waiting jagged road littered with potholes spoils the beauty of the engineering beauty.

Extending the asphalting process to the toll booth would earn government more kudos.