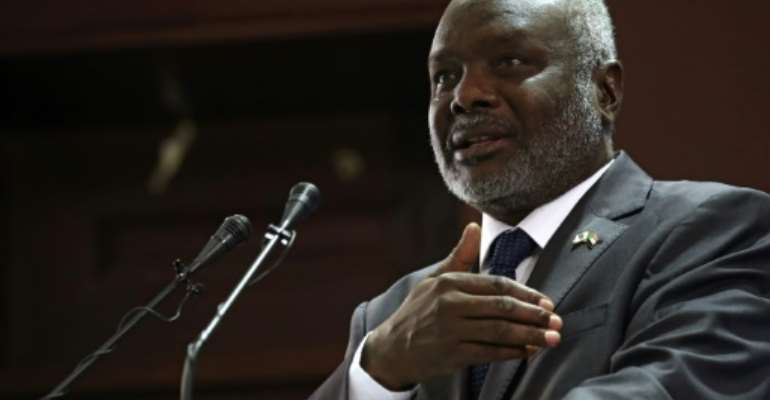 Sudanese Minister of Finance Gibril Ibrahim speaks during a press conference in the capital Khartoum. By ASHRAF SHAZLY (AFP)

Sudan said Sunday it was ditching its fixed exchange rate and adopting a managed float, in line with an IMF programme but at the risk of fanning already-smouldering popular discontent.

It is the latest in a series of reforms by the joint military-civilian government that has ruled Sudan since mass protests led to the military ouster of strongman Omar al-Bashir in April 2019.

The move aims to stem a rampant black market that has seen the local pound recently trade at around 400 to the dollar, while the official rate was fixed at 55 pounds to the greenback.

It is expected to shift the official rate toward black market levels -- sending prices higher even as citizens already grapple with an inflation rate that topped 300 percent last month.

Finance Minister Gibril Ibrahim urged people to tolerate the impact of the policy change, saying in a press conference that it "will require a high patriotic spirit" and "cooperation".

Closing the yawning gap between the official and black market rates is central to a reform programme agreed last year with the International Monetary Fund. 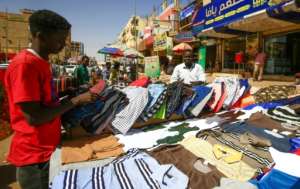 A street vendor displays shirts at a market in the Sudanese capital Khartoum. By ASHRAF SHAZLY (AFP)

The US embassy in Khartoum said on Twitter that "we welcome the Sudanese government's courageous decision to move forward today with exchange rate reform".

"This decision will also help Sudanese companies and attract international investment as both local and foreign companies will no longer encounter difficulties doing business in Sudan because of the dual exchange rate."

Sudan's economy was decimated by decades of US sanctions under Bashir, mismanagement and civil war, as well as oil-rich South Sudan's 2011 secession.

Protests have flared in recent weeks in several regions over skyrocketing prices, alongside bread and medicine shortages. 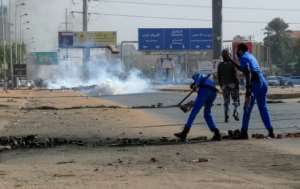 Sudanese security forces remove obstacles placed by protesters as tear gas fumes billow during a demonstration against rising prices in the capital Khartoum, on January 24. By ASHRAF SHAZLY (AFP/File)

The central bank said its policy shift, which follows the recent appointment of a new cabinet tasked with tackling the economic crisis, is "imperative" to help achieve stability.

It is one of several painful IMF mandated reforms, which also include reducing costly subsidies, aimed at securing debt relief and attracting investment.

The finance minister and the central bank governor, Mohamed al-Fatih, said the exchange rate policy shift will be cushioned by international donors financing a project aimed at supporting poor families from Monday.

The programme offers $5 dollars per month each to around 80 percent of the country's 45 million people.

The central bank governor said Sudan has also begun applying a dual banking system, instead of solely Islamic banking, in a move allowing international banks to operate in the country.

If the central bank is to be successful in drawing transactions away from the black market, then reserves need to stand at around $5 billion, Mohamed el-Nayer, a Sudanese economist, told AFP.

Authorities have not lately disclosed the level of reserves.

Asked if the country had enough reserves, Ibrahim replied that funds had lately been received, but did not specify the origin or amount. 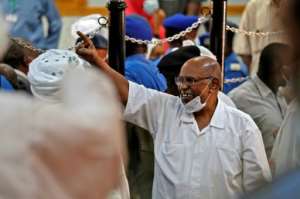 Sudan's ousted president Omar al-Bashir is pictured during his trial in the capital Khartoum on December 15, 2020, along with others over the 1989 military coup that brought him to power. By ASHRAF SHAZLY (AFP/File)

But the recent shortages of bread as well as of fuel point to the possibility that foreign reserves are "severely lacking", Nayer said.

Bashir's fall nearly two years ago came after months of protests against his autocratic rule that were triggered by his cash-strapped government effectively trebling bread prices.

In October, Sudan signed a peace deal with rebel groups that observers hoped would end long-running conflicts in the country's far-flung regions.

Last month, the government approved this year's budget and it is aiming for inflation of 95 percent by end-2021.