By Emma Heywood - The Conversation 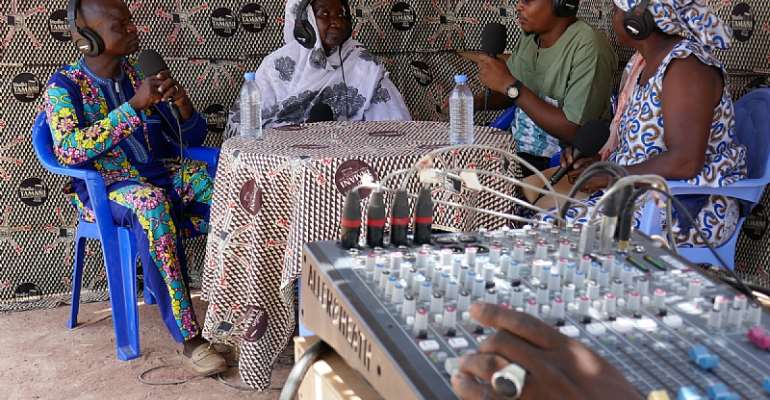 The Malian politician, writer and women's activist Aoua Kéita once argued that, “The evolution of a country depends on the place that women occupy in the public space of that country.” Today, Malian women face multiple and intersecting barriers that prevent them from realising this vision.

In a country with discriminatory laws , extensive polygamy and gender-based violence, and where husbands are often the sole decision-makers, Malian women live in an oppressive culture amid widespread poverty . To ease financial burdens, many Malian girls are forced to marry as children so their families can benefit from their bride price.

Empowerment can mean different things for different women. It can mean staying in school, negotiating more equitable relationships, or learning how to start a small business, in order to become financially independent and provide for one's family. Finding out how to do this is key.

Access to information is the route to empowerment and, in Mali, radio remains the main source of information. The country has 170 private radio stations, 121 of which are volunteer-run community stations. Radio is widely trusted, meeting a range of interests – religious, community and confessional. It shares news from international sources such as RFI , BBC Africa , Deutsche Welle , UN radio and media development organisations.

Factual and awareness-raising broadcasts can raise women's critical and collective consciousness and help them gain greater control over their own lives. But this has to be done carefully. Women have to be accurately considered, both as radio presenters and as radio listeners.

Our research has shown that, when discussing a particular issue, women listeners in Mali consistently situate themselves in relation to many other people. Studio Tamani normalises debate on women's issues through women-related programmes. Samuel Turpin/Fondation Hirondelle

We conducted a content analysis of a series of women-related radio programmes produced and broadcast in 2018-2020 by Fondation Hirondelle's Studio Tamani . We then ran focus groups among the studio's listeners, before and after they listened to the series, to determine the programmes' impact.

The focus group respondents said that women's activities tend to be conducted for, with, or dependent on others. Information targeted at empowering women should reflect this and consider women within their “web of relations”. This means how women live in relation to other people, and to collective cultures and norms that influence and shape their lives.

Empowered within a collective

Among all the people we interviewed, men and women alike, empowerment for women meant “independence”, but never from children. Such independence would empower women to make decisions about their family life and support their wider communities.

For younger women respondents, empowerment could mean being able to make their own decisions and not being restrained by a future husband. But none of them considered a future without a husband. Independence did not necessarily mean being on their own.

It became clear that women's empowerment in Mali cannot be reduced to a matter of individual choice or agency. It refers to collective agency and decision making. This is in stark contrast with the emphasis often found in development campaigns.

Development programmes tend to regard women's empowerment as an individual issue. They can artificially isolate women from the socio-cultural traditions that surround them. They do not fully consider the many “webs of relations” that can be affected by potential changes in empowerment. Nor do they consider the webs that can influence women's lives and their freedom to make decisions.

The radio programmes portrayed women in relation to others (in-laws, siblings, widows, husbands, men, family and children) and to other groups or roles, cultural and structural values or webs which shape women's status. The contents rarely portrayed women as individuals; they were always associated with others. However, they were often in secondary positions, for example, in relation to in-laws and husbands, upholding social norms.

Studio Tamani, as a radio studio, is normalising debate on women's issues by broadcasting women-related programmes. This is a first step to taking advantage of radio as an ideal medium for creating an empowering environment. But for this to be effective for collective empowerment, women must not be extracted from the web of relations that surround them.

Malian women do not speak with one voice, so their diverse perspectives, experience and expertise must also be considered in radio broadcasting. This will go some way to offsetting the individualistic perspectives portrayed in development contexts, particularly with regard to their empowerment.

Beatrice Ivey is affiliated with the University of Sheffield, where she is employed as a Research Associate for a GCRF funded-project.

By Emma Heywood, Lecturer and Researcher, University of Sheffield

Modern Ghana Quote Reports
Catch up with all the political quotes from our politicians.
Sponsored
More Article
Modern Ghana Links
Memory practices are not enough to remedy Nigeria-Biafra war injustices
South Africa needs to change direction on maternal health to solve child malnutrition
Battling misinformation wars in Africa: applying lessons from GMOs to COVID-19
Why working as a journalist in Uganda is particularly tough
International Women’s Day: #ChooseToChallenge, Women achievers to serve as beacons of hope for others
Why Buhari's government is losing the anti-corruption war
Falling through the cracks: shining a light on adolescent girls in humanitarian emergencies
The Commonwealth: rediscovering its radical voice could make it relevant again
The “fallen hope of LGBTQI in Ghana”
Quote Reports Dossiers
TOP STORIES