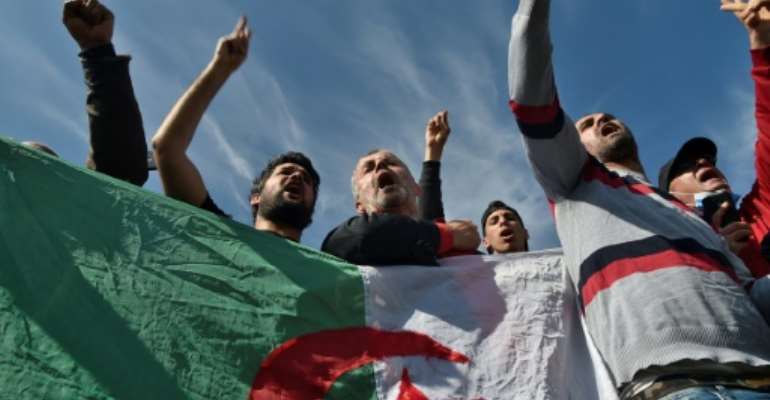 Algerians waving flags gathered outside the Kolea prison on Friday to await activists expected to be freed under a presidential pardon. By RYAD KRAMDI (AFP)

Algeria on Friday released a dozen pro-democracy activists from jail, the first batch freed under presidential pardons issued ahead of the second anniversary of a popular uprising.

President Abdelmadjid Tebboune, in a long-awaited speech to the nation late Thursday, declared dozens of pardons in a gesture of appeasement as the Hirak protest movement gathers momentum once again.

The Hirak mass protests, meaning "movement" in Arabic, swept former strongman Abdelaziz Bouteflika from power in 2019, but continued after his fall.

Tebboune's initiative comes on the eve of the Hirak's second anniversary on February 22, with calls on social media for demonstrations Monday to mark the day.

Algeria is facing political and economic crises, with the coronavirus pandemic adding to the woes of an oil-dependent economy.

The National Committee for the Liberation of Prisoners (CNLD), a rights group, announced the release on Friday, with more detainees expected to be released soon.

Relatives of prisoners and journalists gathered Friday outside the Kolea prison, west of the capital Algiers.

Among the prisoners in Kolea is journalist Khaled Drareni, sentenced to two years in prison in September, and who has become a symbol of the fight for press freedom in Algeria.

"Behind the fence, we are waiting for Khaled," said fellow journalist Mohamed Sidoummou. "We are all optimistic."

It is not confirmed if Drareni, a correspondent for French-language TV5 Monde and press watchdog Reporters Without Borders, will be included in the pardon.

'Change of the system' 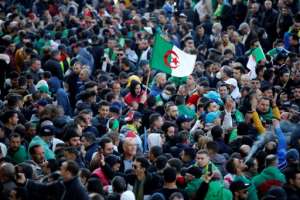 Around 70 people are currently in prison over their links with the Hirak movement or other peaceful opposition political activity, according to the CNLD.

Tebboune said that around 55 to 60 Hirak members would benefit from the amnesty, with their release to start immediately.

However, Drareni is waiting for the Supreme Court to rule on his appeal on February 25, and the pardon applies only to those whose cases are settled entirely, lawyer and rights activist Mostefa Bouchachi said.

Releasing activists whose cases are ongoing "poses a legal problem for the government, unless it is recognised that justice has worked badly," wrote Abed Charef, on the Middle East Eye website.

The unprecedented protest movement, demanding a sweeping overhaul of the ruling system in place since Algeria's independence from France in 1962, only suspended its rallies in March last year amid coronavirus restrictions. 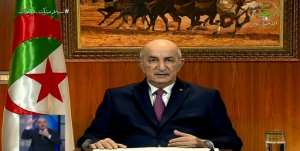 President Abdelmadjid Tebboune also called for early elections in a speech to the nation late Thursday. By - (Algerie 3/AFP)

On Tuesday, thousands of Algerians rallied in the northern town of Kherrata, where the first major protest erupted in 2019 against Bouteflika's bid for a fifth presidential term.

Protesters demanded "the fall of the regime" and "the release of prisoners of conscience".

On Friday, usually the day of Hirak marches, police deployed in large numbers in central Algiers.

"Algerians will continue to demonstrate peacefully to put pressure on the system so that it really changes," Bouchachi said.

Tebboune on Thursday also announced early elections, calling for the dissolution of parliament and declaring a government reshuffle within 48 hours.

Legislative elections had been scheduled to be held in 2022, but Tebboune wants early polls to take place before year's end.

"Democracy is not limited to elections but to the exercise of democratic freedoms," said Said Salhi, from the Algerian League for Human Rights.

"The Hirak calls for a change of the system through an authentic and open democratic process."