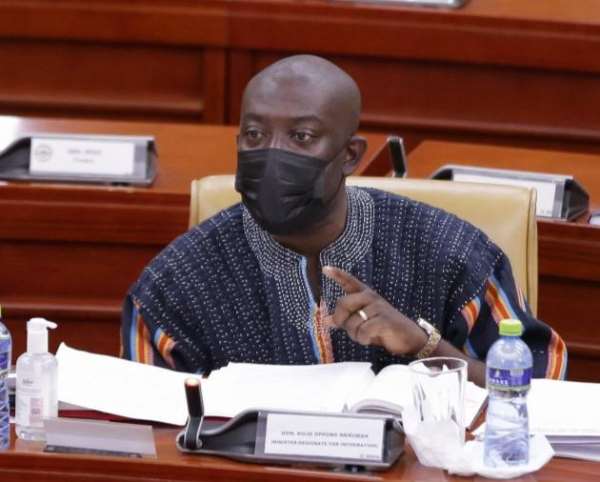 Information Minister-designate Kojo Oppong Nkrumah is proposing legislation against the advocacy of LGBT+ activities in Ghana.

According to him, given the current push for the legalisation of homosexuality in Ghana, the country needs to consider passing a law that tackles its promotion because the practice, in itself, is culturally unacceptable and goes contrary to section 104 of the Criminal Code, 1960.

Mr Oppong Nkrumah, who is also the Member of Parliament for Ofoase Ayirebi Constituency, was responding to questions when he took his turn before Parliament’s Appointments Committee for vetting on Thursday, 18 February 2021.

He said: “Customary law frowns on LGBT activities”, adding: “People say despite the Criminal Code on the general position of customary law, it is just mere expression; they are just advocating it but if you ask me about law and background, I will say, that is when somebody like me will argue that then we should be able to contemplate legislation in the interest of public morality, which will not be against the Constitution but we will now say that you cannot advocate and promote LGBT activities in this country”.

The lawmaker’s comments follow the participation of the European Union (EU) in the opening of a new office space for the Lesbian, Gay, Bisexual Transgender and Queer Intersex (LGBTQI) community in Ghana.

The EU also reiterated its supports for local civil society organisations that push for the rights of the LGBTQI community.

Mr Oppong Nkrumah, however, stressed that the practice is alien to Ghana’s customs and tradition and it is the reason that laws must be passed to deal with persons who advocate and promote the practice in the country.

A few days ago, the National Coalition for Proper Human Sexual Rights and Family Values, expressed its disapproval of the opening of the LGBTQI office in Ghana and called for its closure.

The Coalition said the existence of the office was illegal and an affront to the laws, traditions and customs of Ghana and must be shut down.

Mr Moses Foh-Amoaning, Executive Secretary of the Coalition, at a press conference, said the act was disrespectful to Ghanaians and undermined the sovereignty of the State.

He explained that Ghana, as a country, had not signed any international laws permitting the promotion of the LGBTQI in the country and, therefore, any attempt by anybody to promote the activities of the group amounted to illegality.

Mr Foh-Amoaning noted that on the contrary, international laws such as the Economic, Cultural, Social and Political Rights of the United Nations treaty, which Ghana ratified, protected the sovereignty of Ghana to defend its cultural values.

He, therefore, accused the international community in Ghana of promoting an act which, he said, was alien to the customs and traditions of Ghanaians and infringed on the sovereignty of the state.

Mr Foh-Amoaning called on the Inspector-General of Police and other security agencies to swiftly move in to close down the said office and arrest and prosecute persons found to have breached the laws of the state.

He appealed to Parliament to quickly move and pass comprehensive legislation to deal effectively with the issue.

“We call on all state agencies including Commission on Human Rights and Administrative Justice (CHRAJ), the Ghana AIDS Commission, the police, politicians and the media to take all steps to protect our nation from the negative impact of this LGBTQI,” Mr Foh-Amoaning, said.

Most Reverend Philip K. Naameh, President of the Catholic Bishops Conference described the LGBTQI agenda as a “complete disorder of the fundamental law of God in creating man and woman.”

The Reverend Godwin Amuzu, a representative from the Christian Council of Ghana, urged Ghanaians to remain resolute in maintaining the culture and sanctity of the State as believers in God.

The Reverend Johnny Apeakorang, who represented the Ghana Pentecostal and Charismatic Churches, said the Association would continue to render its support to the Coalition to ensure that its goal was achieved.

The Coalition for Proper Human Sexual Rights and Family Values is an amalgamation of Christian and Para-Christian bodies, Muslims, Non-Religious entities, Traditional rulers and opinion leaders in Ghana.

The Coalition aimed at ensuring the preservation of indigenous African traditional and cultural sexual rights and family values.

It has been a strong advocate against the LGBTQI movement in Ghana since it’s inauguration in December 2013.