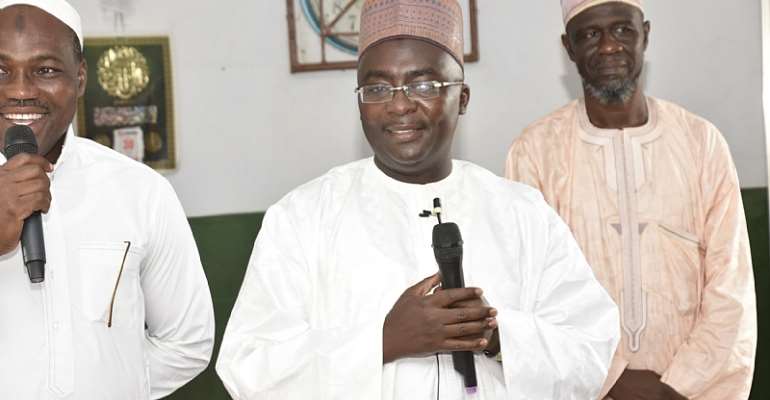 When I was growing up, I read haphazardly. No plan, no specialty, no exclusivity. Nothing. Just consuming words from anywhere readily accessible. I began to be selective and specialize after I was introduced into active reading.

The first book that ushered me unto that path is Long Walk to Freedom; The Autobiography of Nelson Mandela. I therefore began to read biographies, memoirs and autobiographies.

Interestingly, my interest in biographies increased in profundity when we had an interaction with then Information Minister, Mustapha Hameed in the boardroom of the Ministry of Information to discuss the anniversary celebrations of our book club in August 2017.

That day, he boldly stated that he does not read fiction. In fact he dislikes it. He loves to read about lives of great men, lives that raise your hackles as a reader and influence your life as a person. Lives that push you to dare greatly and live boldly as a human being. He stated that the best book he has read is Decision Points by George W. Bush. Though I disagreed with him on that stance, I left with a firm resolve to soak myself deep in biographies and memoirs.

I wrote somewhere about how the lives of successful men collapse the timeline for the young and upcoming ones. I also wrote copiously on how memoirs of the people who made a dent in the universe offer us a gale of hope in a world that has gone very crazy. Today I want to write about how a movie made from a biographical piece of one great man inspired a group of young people to make a resolution to work hard to rise above the circumstances of their birth.

Earlier this year at the ZongoVation Hub in Accra, I led a group of young boys and girls to watch and discuss the movie, Gifted Hands: The Ben Carson story; the 2009 biographical television drama film based on the book by the same name written by the celebrated neurosurgeon, Benjamin Carson. The ZongoVation Hub is a community technology innovation hub dedicated to the development and growth of young entrepreneurs and startups in the Zongo communities across Ghana. It was established to support young people with ideas to become entrepreneurs by providing them with all the necessary tools and networks. It is in lieu of this vision that I was invited to lead the children in a movie discussion that will as it were, jet-propel them unto the path of achievement and greatness.

In leading the discussion, I dwelled more on the book than the movie because it is the source of the movie and also because of my desire to get the children to appreciate the honored act of reading and become book-addicts. I also dwelled on it because it adds bites to the constricted nature of the movie and gives a panoramic view of the struggles of the young Ben Carson to defy the odds and of the “faith and genius that make him one of today’s greatest life-givers.”

The book which begins with a letter from Sonya Carson, Ben’s mother to the reader is made up of twenty-two chapters and tells of the inspiring story of a young boy who came from an inner-city of Detroit and how he was able to scale ahead in life to become a professor of neurosurgery, plastic surgery, oncology and pediatrics and also the director of pediatric neurosurgery at Johns Hopkins Medical Institutions. The movie begins in the operation room. A 70-member team is shown operation on twins conjoined at the back of their heads. In the quiet and serene atmosphere, one hears the command ‘more blood! It shows Ben Carson leading the team to perform this spell-binding experiment successfully. This is after months of him researching and planning on how to successfully do this.

The film then shows a young Ben at Detroit, Michigan who was a merest dunce in his class. He was intolerably stupid. His teenager mum also worried about the academic woes of her sons and thinking things over in her head about how to change that. She checked into a mental institution and starting cleaning for the middle class in the richer side of the community. There, she learnt first-hand the habits of the successful and resolved to see her children do that to also attain success. The successful have big libraries and small televisions for decoration rather than for endless watching. She returns home to restrict their television intake and required them to read books every week and write reports on them.

Almost miraculously, Ben moved from the bottom of his class to the top within a year. He began to read voraciously and become the toast of teachers. He later got a scholarship to Yale University and subsequently got accepted as a resident at John Hopkins University where he showed his stuff and became a walking neurological institution.

So we watched the movie under the dim light in the hub and interspersed it with some highlights from the book. We discussed many of the issues mirroring it with our society. Of all the issues discussed, we spent more time on two issues germane to our community that we derived some answers from the movie and by tether, the book.

We spent a considerable amount of time discussing parents and parenting. The book and the movie gives much premium to parenting. As explained earlier, the movie shows the pivotal role of the great doctor’s mother to his success, which was mainly through reading. Therefore this movie is important for every parent to watch in order to motivate them to be part of their children’s successes. My friend, who has been a teacher for five years laments to me how she has never met about 95 percent of parents of her wards throughout her years of teaching. Parenting goes beyond providing some basic needs like shelter, clothing, etc. Like Sonya, active involvement in your children’s pursuit of knowledge is one of the best gifts you can give them as parents. They look up to you for guidance and they believe in your judgment. Thus, you owe it to them to help them shape their lives through knowledge seeking.

Reading your way to the top.

I reminded the young ones that we live in a global village now where anything that happens in Estonia affects California or anything that befalls Kandahar, touches Madagascar. In a like vein, people from different nationalities hold jobs in different countries. The world now is more of what you can offer rather than where you are from. And one thing that provides you with necessary tools and qualification to be able to also compete is your knowledge-bank and how you apply it. I reminded also of the fact that just like Ben Carson who experienced single-parenting for a greater number of years in his life, he was an African American in an America that discriminated more against Blacks then, was from very poor home and face many other odds, they can also rise up against all odds through hard work, perseverance and prayer. I made it clear to them that each and every one of them must have a deep belief that they are going to be great in life.

And when at the end of the discussion, I tasked everyone to speak on what he or she has learnt, I was left mesmerized on the quality of their responses. I share a few below.

Amina: No one is born block-headed. You can break or make yourself; when you want to change, it is up to you.

Abubakar: Prayer is key. Imagination is another and knowledge joins them all.

Robin: Imagination is better than education.

And Collins summed it all for us when he stated that “be optimistic even in the eye of the storm.”

NB: The Writer is a Youth-Activist and the Executive Secretary of Success Book Club.