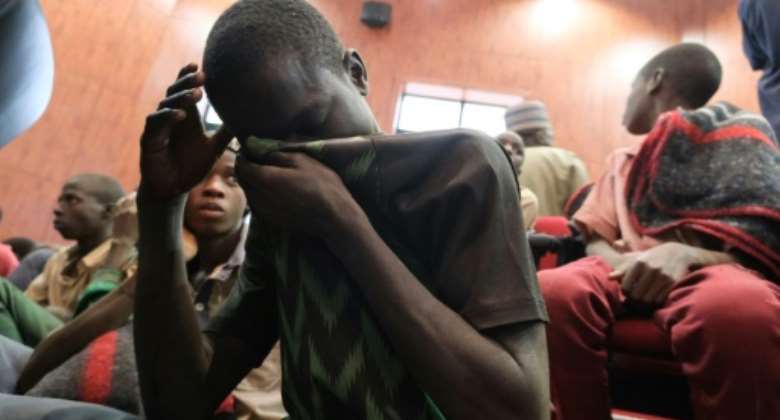 The latest mass kidnapping comes just two months after hundreds of schoolboys were abducted in Kankara, in northwestern Nigeria. Pictured: Kidnapped boys after their release. By Kola SULAIMON (AFP/File)

Gunmen believed to belong to a criminal gang stormed a school in central Nigeria, killing one student and kidnapping hundreds of others along with some teachers, sources said Wednesday.

Heavily-armed gangs known locally as "bandits" in northwest and central Nigeria have stepped up attacks in recent years, kidnapping for ransom, raping and pillaging.

Late Tuesday, large numbers of gunmen dressed in military uniforms stormed the Government Science College (GSC) in the town of Kagara in Niger state before hauling students into a nearby forest, a government official and a security source said.

"Bandits went into GSC Kagara last night and kidnapped hundreds of students and their teachers," said the official, who asked not to be named due to the sensitivity of the issue.

"One of the kidnapped staff and some students managed to escape. The staff confirmed a student was shot dead during the kidnap operation," the official said.

Garba Shehu, a spokesman for President Muhammadu Buhari, told AFP he was aware of reports of students kidnapped from a school in Kagara and that a statement would be issued.

Only two months ago, more than 300 students were kidnapped in Kankara, in nearby Katsina state.

The boys were later released but the incident sparked global outrage.

The school targeted on Tuesday has around 1,000 students and it was not immediately clear how many were taken.

"A head count is underway to establish how many students were kidnapped," a security source said.

Troops with air support were tracking the bandits for a possible rescue operation, the source said.

The region is increasingly a hub for criminal gangs who raid villages, killing and abducting residents after looting and torching homes.

Bandits are known to hide in camps in Rugu forest, which straddles Zamfara, Katsina, Kaduna and Niger states. Despite the deployment of troops, deadly attacks persist.

But there is growing concern they are being infiltrated by jihadists from the northeast who are waging a decade-old insurgency to establish an Islamic state.

The latest kidnapping incident comes nearly three years after 111 schoolgirls were snatched by jihadists in Dapchi, in the north, and six years after 276 girls were taken from Chibok, in the northeast, in a raid that shocked the world.

"Nigeria has to declare a state of emergency on insecurity," said Idayat Hassan, director of the Abuja-based Centre for Democracy and Development think tank.

"The government must secure the schools and urgently too, or else (the) Chibok, Dapchi and Kankara school raids will encourage others to do worse."