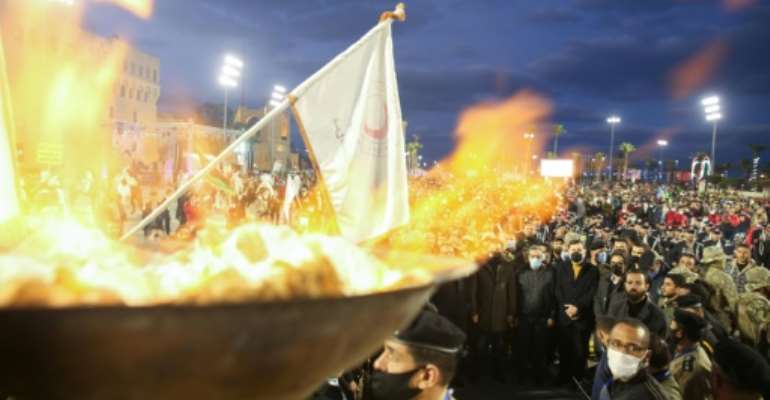 Libyans light a commemorative torch in the capital's Martyrs' Square as celebrations get under way for the 10th anniversary of the launch of the uprising that toppled longtime dictator Moamer Kadhafi. By - (AFP)

Libyans marked the 10th anniversary Wednesday of the start of the uprising that toppled longtime ruler Moamer Kadhafi, ending decades of dictatorship but throwing the country into violent chaos.

In western Libya, festive crowds gathered in public squares to watch anniversary fireworks and military parades, but in the east, which has had a separate government for years, the mood was more sombre.

Ahead of the anniversary, UN envoy Jan Kubis held talks with Libyan leaders Tuesday on his first visit to the North African nation since taking up the post.

Kubis underlined the importance of consolidating a fragile October ceasefire between the country's warring alliances that has given Libyans a ray of hope after years of deadly fighting between the rival governments in the east and west, a UN statement said.

He also stressed the importance of a "smooth transition of power" following successful talks in Switzerland which resulted in the formation of a new, unified interim executive authority earlier this month.

On the eve of the anniversary, cities across western Libya, including the capital Tripoli, hosted military parades and fireworks displays.

Streets have been decked out with lights and banners, while fresh coats of paint have spruced up Tripoli's old city. In the capital's Martyrs' Square, officials watched as a memorial flame was lit. 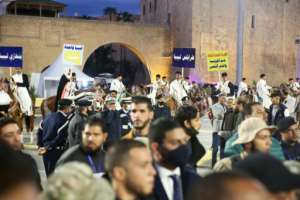 Hundreds of Libyans turned out in the capital to commemorate the uprising despite coronavirus restrictions. By - (AFP)

Formerly known as Green Square, the Tripoli landmark is where Kadhafi delivered many of the maverick policy addresses and anti-Western tirades that marked his four decades in power before his ouster and murder in the climax of the NATO-backed uprising.

Celebrations were lower-key in eastern Libya, the longtime fiefdom of a rival administration dominated by military strongman Khalifa Haftar.

It was the defeat of a drive on Tripoli by Haftar's forces in June last year that led to the progress in UN-backed talks on a settlement.

Authorities in the east have declared Wednesday a national holiday but they stopped short of announcing a programme of celebrations.

Heavy snowfall was recorded in the region's Jebel Akhdar mountains, adding a chill to the commemorations.

Even in the region's main city Benghazi -- where the revolution began 10 years ago --- no official events were planned.

"Going out to celebrate... would be mad because the revolution has been a catastrophe that has wrecked years of stability," said Khamis al-Sahati, an eastern-based activist.

At the local level, much of Libya remains in the hands of a mosaic of neighbourhood militias born out of the rebel groups that toppled Kadhafi.

Some stand accused of war crimes that have gone unpunished because of the militias' importance to the rival alliances in power in Tripoli and Benghazi.

"Justice has yet to be delivered to victims of war crimes and serious human rights violations including unlawful killings, enforced disappearances, torture, forced displacement and abductions committed by militias and armed groups," human rights group Amnesty International said in a statement. 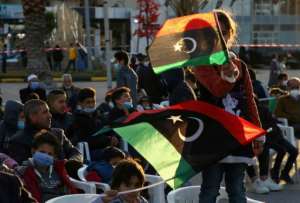 On the international level, many of the foreign forces whose intervention helped fuel the conflict of recent years remain on the ground.

During the battle for Tripoli in 2019-2020, Haftar received military support from Russia, the United Arab Emirates and Egypt, while the rival Government of National Accord was backed by Turkey.

"The secretary general stressed the UN's support to Libya's elections, the monitoring of the ceasefire and the need for withdrawal of foreign forces," UN spokesman Stephane Dujarric said.

In December, there were around 20,000 foreign troops and mercenaries deployed inside Libya, according to the UN.

Asked if the world body had noticed any start of a withdrawal of foreign forces, Dujarric said the UN was not aware of any pullout.

"I have not gotten to hear any updates on foreign troops leaving," he said. "We want that to happen, obviously as soon as possible."