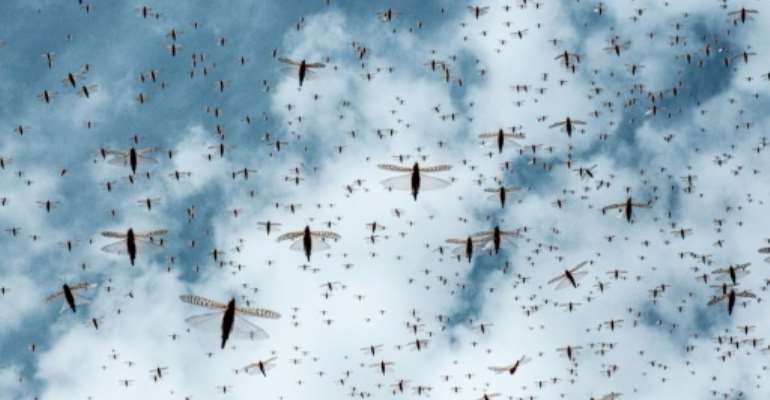 Swarm: Locusts have been cutting a devastating swathe across eastern Africa. By Yasuyoshi CHIBA (AFP)

As dawn breaks in central Kenya, a helicopter lifts off in a race to find roosting locusts before the sun warms their bodies and sends them on a ravenous flight through farmland.

Pilot Kieran Allen begins his painstaking survey from zebra-filled plains and lush maize farms, to dramatic forested valleys and the vast arid expanses further north, his eyes scouring the landscape for signs of the massed insects.

The chopper suddenly swings around after a call comes in from the locust war room on the ground: a community in the foothills of Mount Kenya has reported a swarm.

"I am seeing some pink in the trees," his voice crackles over the headphones, pointing to a roughly 30-hectare (75-acre) swathe of desert locusts.

Reddish-pink in their immature -- and hungriest -- phase, the insects smother the tips of a pine forest. 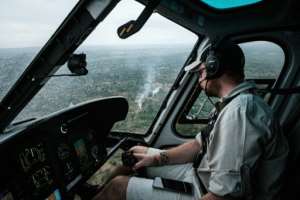 Hunter: Helicopters are sent out to spot swarms in the early morning as the locusts are roosting in trees and bushes. Pilots then call in pesticide-spraying aircraft to kill the insects. By Yasuyoshi CHIBA (AFP)

Allen determines that nearby farms are at a safe distance and calls in a second aircraft which arrives in minutes to spray the swarm with pesticide.

On the ground, having warmed to just the right temperature, the thick cloud of locusts fills the air with a rustling akin to light rainfall. But a few hours from now, many will be dead from the effect of the poison.

Last month alone, Allen logged almost 25,000 kilometres (15,500 miles) of flight -- more than half the circumference of the world -- in his hunt for locusts after a fresh wave of insects invaded Kenya from Somalia and Ethiopia.

Like other pilots involved in the operation -- who have switched from their usual business of firefighting, tourism, or rescuing hikers in distress -- he has become an expert on locusts and the dangers they pose.

"Those wheat fields feed a lot of the country. It would be a disaster if they got in there," he says pointing to a vast farm in a particularly fertile area of Mount Kenya.

Desert locusts are a part of the grasshopper family which form massive swarms when breeding is spurred by good rains.

They are notoriously difficult to control, for they move up to 150 kilometres (90 miles) daily. Each locust eats its weight in vegetation daily and multiplies twenty-fold every three months. 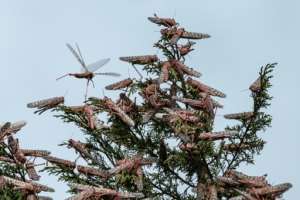 Desert locusts cover the tree tops in Meru, Kenya. The insects are pink in this early stage of development - and at their most voracious. By Yasuyoshi CHIBA (AFP)

The locusts first infested the east and Horn of Africa in mid-2019, eventually invading nine countries as the region experienced one of its wettest rainy seasons in decades.

Some countries like Kenya had not seen the pest in up to 70 years and the initial response was hampered by poor co-ordination, lack of pesticides and aircraft, according to Cyril Ferrand, a Nairobi-based expert with the UN's Food and Agriculture Organization (FAO).

A slick new operation to combat a second wave of the pests has improved control and co-operation in Kenya, Ethiopia and parts of Somalia.

In Kenya, the FAO has teamed up with the company 51 Degrees, which specialises in managing protected areas.

It has rejigged software developed for tracking poaching, injured wildlife and illegal logging and other conservation needs to instead trace and tackle locust swarms.

A hotline takes calls from village chiefs or some of the 3,000 trained scouts, and aircraft are dispatched. 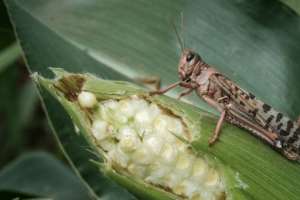 Harvest peril: A desert locust tucks into maize, or corn, in a field in Meru. The species eats its own weight in food every day. By Yasuyoshi CHIBA (AFP)

Data on the size of the swarms and direction of travel are shared with the pilots as well as governments and organisations battling the invasion in Somalia, Kenya and Ethiopia.

"Our approach has completely been changed by good data, by timely data, and by accurate data," said 51 Degrees director Batian Craig.

He said in Kenya the operation had focused on a "first line of defense" in remote and sometimes hostile border areas, which had successfully broken up massive swarms coming in from Ethiopia and Somalia before they reach farmland further south.

In a complex relay, when the wind shifts and the swarms head back into Ethiopia, pilots waiting on the other side of the border take over the operation.

Southern and central Somalia is a no-go zone due to the presence of Al-Shabaab Islamists and the teams can only wait for the swarms to cross over.

Ferrand told AFP that in 2020 the infestation affected the food supply and livelihoods of some 2.5 million people, and was expected to impact 3.5 million in 2021.

He said while a forecast of below average rainfall and the improved control operation could help curb the infestation, it was difficult to say when it will end. 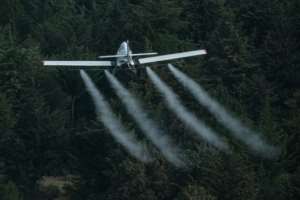 Air support: A plane sprays pesticides over locust-covered trees in Meru. The poison is not exclusive to pests, as bees, butterflies and other friendly insects are also killed. But it is designed to break down quickly and lose toxicity within a day. By Yasuyoshi CHIBA (AFP)

But with dizzying climate fluctuations in the region, "we need to start looking ahead to what needs to be in place if we start to see more frequent infestations of desert locusts."

While the size of swarms have decreased this year, each one is "affecting someone's livelihood along the way," said Craig.

In a Meru village, desperate farmer Jane Gatumwa's 4.8-hectare farm of maize and beans is seething with ravenous locusts.

She and her family members run through the crops yelling and banging pieces of metal together in a futile bid to chase them away.

"They destroy everything, they have been here for like five days. I feel bad because these crops help us to get school fees and also provide food."

"Now that there's nothing left we will have a big problem."