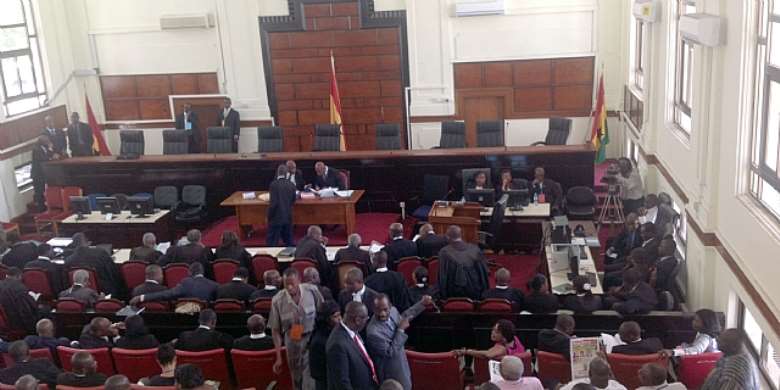 Before Nana Addo and his co-petitioners, Mr. Jake Otankah Obetsebi Lamptey and Kwadwo Owusu Afriyie, went to court, they took time to gather Thousands of pink sheets to challenge the anomalies in them. Number one of these anomalies was over voting. On their part, the lawyers of John Dramani Mahama, the second respondent, had the burden of undermining the evidence of the petitioners. This was made clear by Mr. Tsatsu Tsikata, the lead counsel of the National Democratic Congress as he ordered Dr. Mahamadu Bawumiah, the chief witness of the petitioners, to answer his questions because he, Tsikata was in court to undermine the witness’ evidence.

At the end of the day, the second respondent, Mr. John Dramani Mahama and the first respondent, the Electoral Commission of Ghana, carried the day. Nevertheless, Mr. Tsatsu Tsikata, the brain behind the victory of John Mahama and the Electoral Commission of Ghana, did not get it easy as he used over five months to cross examine Dr. Mahamadu Bawumiah. Though the respondents won the case, the bench admitted that the evidence of the petitioners revealed that the election was characterized by irregularities as the petitioners sought to show in their case.

But what did we see? Surprisingly, one of the excellent lawyers in the country, Tsatsu Tsikata, appeared in court as the lead counsel of John Dramani Mahama with 12 questions. The legal guys call it interlocutory injunctions. As typical of a good lawyer who is capable making a case out of no case, Mr. Tsatsu Tsikata eloquently presented these 12 questions in a neatly woven grammatically accurate sentences to the admiration of we those who know nothing about law. At the end of the day the court of law prevailed over the eloquence and grammar of Mr. Tswatsu Tsikata as the questions of the ‘Chief Examiner’ of the Ghana Bar Association were rejected by the bench in the case management process.

Judgement continued. The witnesses of the petitioner have been dragged into the witness box to prove their credibility as the lawyers call it. The first witness, Mr. Johnson Asiedu Nketia, appeared in the witness box. As lay men, we were all expecting Johnson Asiedu Nketia to prove with evidence, their claims in press conferences that proclaimed John Dramani Mahama as the winner of the 2020 elections but did that happen? The witness even struggled to recall that they had held press conferences to declare Mr. John Dramani Mahama winner over President Nana Addo. I must however, state that Johnson Asiedu Nketia did not speak much grammar.

Dr. Kpasah White, another witness, appeared in court after Johnson Asiedu Nketiah. Since he was in the Engine room to represent the petitioner, John Mahama, we thought Nana Addo was in trouble: he had all the evidence. Alas, he came to court to let us believe that he was busily taking instructions from the Chairman of the Electoral Commission that the NDC never trusted from the day of her appointment! As a lecturer, he also attempted to eloquently lecture the court with his lecture hall grammar but since it is a court of law and evidence and not court of eloquence and grammar, he was legally ordered by the bench to stop lecturing and answer the questions that confronted him. Finally, the third witness came to talk about tea without biscuit.

Finally, Mr. Tsatsu Tsikata, the lawyer any Ghanaian would love to have on his side in court took over. Those of us who dread him as a lawyer could not just wait to see him prove with evidence that his candidate won over Nana Addo as they proclaimed in the series of press conferences they held from 7th to 9th December 2020. Alas, that did not happen! He rather requested for the data of the Chairperson of the Electoral Commission, the person they never trusted from the date of her appointment till the 9th of December 2020, when she declared Nana Addo the winner of the election. Will the court grant that? That is not our business.

Your plan to buy oil with gold instead of USD bogus; you're ...
26 minutes ago