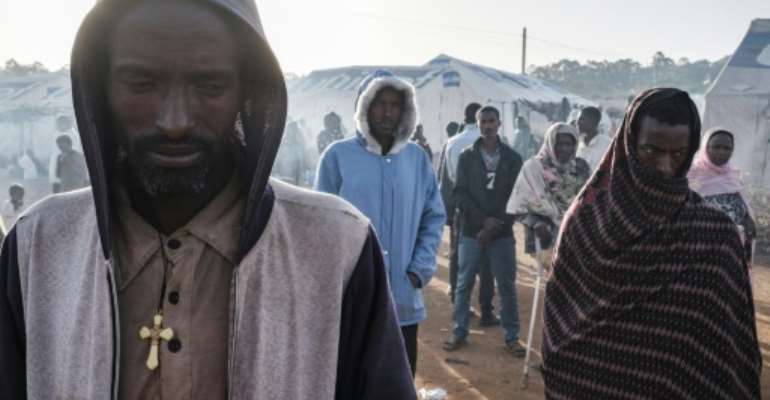 Almost unknown to the outside world, an ethnic conflict in Metekel, western Ethiopia, has left hundreds of dead and forced tens of thousands from their homes. Pictured: A camp for displaced people at Chagni. By EDUARDO SOTERAS (AFP)

On the night before Orthodox Christmas last month, Ethiopian priest Girmay Getahun donned a white robe and, Bible in hand, walked down the dirt road to his church to prepare for services.

Around midnight, heavily-armed fighters arrived in his village, in Ethiopia's western Benishangul-Gumuz region, sending Girmay fleeing into the forest to hide for two days.

He returned to a horrifying sight: the corpses of his eight housemates, all day-labourers on teff and peanut farms, who had become the latest victims in a gruesome, perplexing string of attacks. 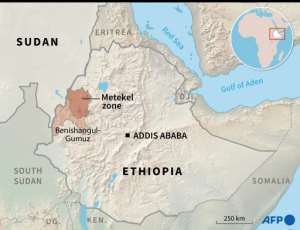 Map of Ethiopia locating the area of Metekel. By Simon MALFATTO (AFP)

Hundreds have died and tens of thousands have fled their homes.

Inter-ethnic violence in this lowland area, known as Metekel, predates a brutal three-month-old conflict farther north that has pitted Prime Minister Abiy Ahmed against the former ruling party of the Tigray region.

Yet the bloodshed has intensified just as the military is trying to assert control over Tigray -- highlighting how Abiy, the 2019 Nobel Peace Prize winner, does not have the luxury of addressing just one security crisis at a time.

In mid-November, 34 civilians were killed in Metekel when gunmen attacked a bus. 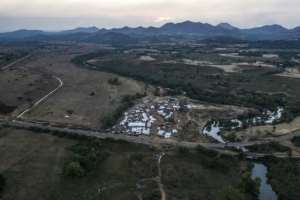 A camp at Chagni hosts people who have fled violence in the Metekel area. By EDUARDO SOTERAS (AFP)

In late December, one day after Abiy visited the area, more than 200 people perished in a pre-dawn massacre, some burned alive as they slept.

And last month more than 80 died in a raid involving knives and arrows.

Even as analysts puzzle over who and what is driving the violence, there are fears it could soon escalate.

Abiy's government has unveiled plans to form a militia of civilians displaced by past attacks to return to Metekel to "protect" those remaining.

At a displacement camp in the town of Chagni, east of Metekel, Girmay is one of many residents who back this move.

"I don't fully support the idea of forming a militia, because in my opinion it's like saying, 'Kill one another,'" Girmay told AFP as he clutched a wooden cross.

"But if there are no other options and if (the gunmen) are not disarmed, we shall train some recruits from here to protect our lives."

'We have to defend ourselves'

Abiy has so far failed to provide an explanation for the carnage in Metekel. 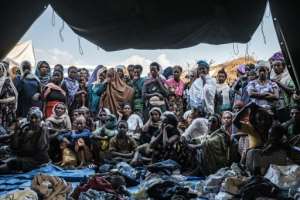 People fleeing violence in the Metekel zone gather outside a tent where clothes are being distributed at a camp in Chagni, Ethiopia. By EDUARDO SOTERAS (AFP)

He told lawmakers in October that assailants were receiving training in neighbouring Sudan, and in December he said the killings were aimed at siphoning off military forces sent to Tigray.

But his government has not put forward evidence to back either claim.

At the Chagni camp, an ever-growing collection of crammed tents surrounded by waterpear trees in Ethiopia's Amhara region, theories centre on long-running disputes over land.

Most of the camp's 20,000 inhabitants are ethnic Amharas, Ethiopia's second-largest group.

Many buy into the idea of an "Amhara genocide" perpetrated by militiamen from the local Gumuz population.

These fighters, they say, are attacking Amhara farmers like Girmay's housemates to drive them off land they have long cultivated. 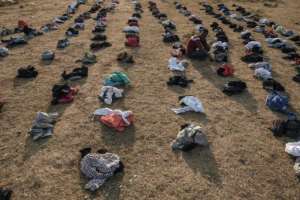 A displaced person sits among piles of clothes being distributed at the camp in Chagni. By EDUARDO SOTERAS (AFP)

Amhara officials seize on this line to argue that Amhara security forces should be deployed en masse alongside the military to restore order.

"We have to defend ourselves. They don't let us live," said Amhara official Asemahagn Aseres, calling on Twitter for violent retaliation.

Yet the reality is more complex, for Amharas are not the only victims.

Ethnic Gumuz civilians are also on the run, with 34,000 hiding in forests in fear of violence, state media quoted a local security official as saying last week. 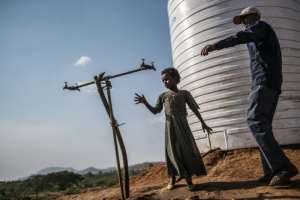 A water tap at the Chagni camp. By EDUARDO SOTERAS (AFP)

Temesgen Gemechu, an Oromo lawyer from Metekel who has researched the violence, showed AFP a list of 262 Gumuz he said had died in attacks dating back to 2019.

Their suffering goes unnoticed, he said, because the Gumuz -- a small group historically subject to enslavement -- have scant political power.

"When Oromo people die, everyone speaks out about it. And for Amharas it's the same. But nothing happens when Gumuz people die," he said. "Who cares about them?"

The violence has left civilians in Chagni visibly shaken, said a health ministry psychiatrist posted there.

"All the people here are in some way, shape or form traumatised," he said.

"Many people have PTSD, high anxiety, and they are very aggressive because they have seen people getting slaughtered." 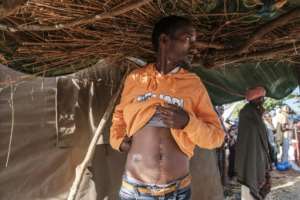 Dawud Kibret shows scars of where he was shot in the abdomen. He is keen to join a government-organized militia. By EDUARDO SOTERAS (AFP)

Conditions in the "miserable" camp are not helping, acknowledged Tilahun Anbelu, an Amhara government official who helps manage it.

On a recent morning, women selling coffee and shiro stew crouched outside poorly-installed tents that had been knocked over by the wind.

Outside another tent, a Unicef worker used a microphone to announce that residents would soon incur fines of 10 Ethiopian birr (around 25 US cents) if they kept relieving themselves in bushes around the camp rather than in newly-built latrines.

Standing nearby, 38-year-old Dawud Kibret said he was desperate to return to Metekel and had not hesitated to sign up for the militia being organised by the government.

"I want to give up my work to protect my people," said Dawud, a farmer who fled Metekel after he said a Gumuz fighter shot him in the abdomen.

"I want to serve the people like a soldier."

He is on track to get his wish.

Over the weekend, Lieutentant General Asrat Denero, who is in charge of security in Metekel, told state media that around 10,000 militia recruits had been identified.

Training, he added, would begin "soon."