Will It Be ‘Aninization’ Of Electoral Mathematical Inexactitudes? 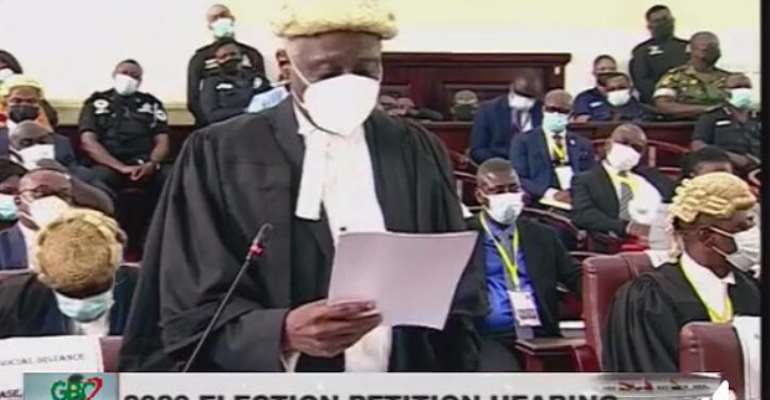 Judgment will soon be given of the Petition on the 2020 Presidential Election by the NDC. Before we comment on it, let us go back to 2013 when the NPP faced a similar task as the NDC is facing now: ATUGUBALIZATION OF PINK SHEETS. Let us read now.

ATUGUBALISATION AS an eponym is the summarization in a few minutes of a judgment in a case which took many months to try. A judge atugubalises when he sums up his judgment in a terse, concise, epigrammatic, brusque, compact, curt, and succinct form. The adjectives are atugubalian, atugubalic and atugubalous. It has an origin similar to that of ‘macchiavellian’ (cunning and duplicitous) ‘Sandwich’ named after John Montagu, Earl of Sandwich (1718 – 1792), ‘cardigan’ named after James Thomas Brudenell (1797 – 1868) the Seventh Earl of Cardigan; ‘saxophone’, named after Sax, the surname of a 19th century instrument-making family in Belgium; ‘boycott’; ‘braille’; or ‘watt’ from James Watt; or ‘zeppelin’; or ‘quixotic’ from Don Quixote; or ‘diesel’; ‘lynch’; ‘ohm’; ‘pasteurisation’; ‘gerrymandering’; ‘guillotine’ or ‘sequoia’; or ‘silhouette’; or ‘shrapnel’. On August 24, 2009, an article on Senator Lindsey Graham quoted him as stating: “Let’s not Rumsfeld Afghanistan”. And you know Donald Rumsfeld was the United States Secretary of Defence from 2001 to 2006 under President George W. Bush; and you might also remember what the US did in Iraq and Afghanistan during that period.

The Judgment Day came on August 29, 2013. Many people gave themselves a holiday, and by 9:00 am got glued to their TV sets. There was a kaleidoscopic scene of the NPP gurus in Nana Akufo-Addo’s house and the white-robed President Mahama and Vice President Amissah Arthur at the modernized Jubilee House, the former sipping some liquid: what people thought was coffee, tea, coke, champagne or punch (every kind of drink mixed together).

“We unanimously dismiss the claims relating to duplicate serial numbers, duplicate polling station codes, and unknown polling stations, that is for short… In the circumstances the overall effect is that the first respondent was validly elected and the petition is therefore dismissed. Our various judgments for the sake of convenience are handed over to the registrar of this court… That is our judgment.”

It was anti-climactic, the Petitioners’ lawyers responded; “As the court pleases”. Serenity, calmness. One would not hear any noise, except for the shuffling of papers. No more coughs, no more hiccups from Atuguba. Tax payers’ money wasted on biometric machine or on the televising of the petition.

The first Petitioner, Nana Akufo-Addo, accepted the verdict, saying: “While I disagree with the court’s decision, I accept it. I accept that what the court says brings a finality to the election dispute. We shall not be asking for a review of the verdict. So we can all move on in the interest of our nation”. He had earlier, rang the President, John Dramani Mahama, and congratulated him. Sad, but not for Wereko-Brobbey, Kwame Pianim and Arthur Kennedy who had earlier publicly spoken against the Petitioners’ going to court.

In a statement released a day after the judgment, Kofi Annan, former United Nations General Secretary called for reforms of the electoral system. He noted, “That we were able to resolve this contested electoral result peacefully through the justice system is an encouraging illustration of the progress we have made as a society over the past two decades. This success must not blind us to the flaws in our electoral system that the judicial review has brought to light. All concerned need to work energetically to ensure that these flaws are addressed through the necessary institutional reforms”. But acid-mouthed Asiedu Nketia, General Secretary of the NDC gloated over the nation that he knew the party had not done anything wrong; the judgment had vindicated them, and he was happy with the judgment. In a sharp condemnation of critics of his “Any fool can go to court”, he noted that any misrepresentation of that statement depicted lack of knowledge of logic.

Whereas the President John Mahama saw the usefulness of the exercise, his Vice President Amissah-Arthur, was telling the world that the case should not have gone to court in the first place.

John Jinapor says on Metro TV (02/09/13) that they have a month-long celebration and prayers to the Almighty. Why wouldn’t they? It is their desserts – and no one begrudges them.

Perhaps the most unkindest cut of all (don’t mind the double superlatives Shakespeare himself admits he was a “weakish speller and of course grammarian”) was the remark by the self-assertive, self-engrossed Tsatsu Tsikata on the ‘voting stance’ of Justice Anin-Yeboah.

Speaking on the maiden edition of ‘Hot Issues’ on TV3, hosted by the loquacious and die-hard socialist, Kwesi Pratt, on Saturday, August 31, 2013, Mr. Tsatsu Tsikata ranted and praved – that a member on the panel of judges, Justice Anin-Yeboah consistently took an opposing stance against NDC’s arguments and positions, as far as the electoral petition was concerned. Having been appointed by President Kufuor, Justice Anin-Yeboah had to defend the cause of his former President, so argues Tsatsu Tsikata.

This prompted the NPP General Secretary, Kwadwo Owusu Afriyie, who is on a bond of ‘good behaviour’ to react vehemently against Tsatsu Tsikata’s warped logic: “If going by Tsatsu’s logic Anin-Yeboah was appointed by Kufuor, and as such owes his loyalty to the NPP, then what do we say about the four judges who decided that no irregularity occurred in the 2012 elections to warrant a nullification of the tainted votes?” It is difficult to understand the beef of Tsatsu. His party has won the presidential petition case. Why attack the integrity of one judge on the panel?

So, now, we have to examine the background of every member of the panel to find his political inclination, leaning and persuasion. Not only that, we have to look for, and find a judge’s family, network of friends, school(s) attended, social club(s) he belongs to, the food and drinks he likes best, how many times he goes to the toilet – before passing a judgment. Tsatsu has opened the Pandora’s Box, and was F. F. Antoh (the Ashanti Regional Chairman of the NPP) not right when he remarked that it was too early for the Petitioners to have accepted the atugubalised verdict? Let us wait for the verdict of the 2020 Presidential Election Petition.