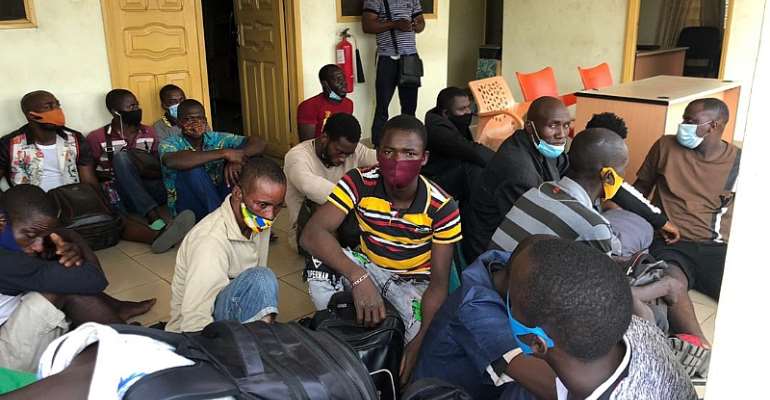 Some of the arrested illegal immigrants

The statistics of illegal immigrants passing through our porous frontiers is obviously not something our immigration officers would know.

It is only those who are stopped at checkpoints and known joints along the border whose details are captured for record and media purposes.

It is clear however that, there has been a rise in the number of arrests being made by our immigration officials of late.

We do know also that the border closure is an opportunity for bad elements in the Ghana Immigration Service (GIS) and others to cash in on the situation. As a human institution, some bad elements do exist in the security agency, but we know also that when such persons are exposed they would face the appropriate sanctions as already happened to others. We have confidence in the GIS not to brook cases of dereliction of duty on the part of its personnel.

We wish to state that it is worrying that some Ghanaians would facilitate the compromising of our shut borders by allowing illegal immigrants to pass through. And to imagine that this is being done for pittances aggravates our pain even further.

Do those engaged in such activities appreciate the negativities of what they are doing?

We are definitely not in normal times when anybody would be allowed to sneak in from neighbouring countries under the pretext of proceeding to La Cote d'Ivoire.

The illegal immigrants would not dare embark on such missions were the possibilities of passing through not existing.

It behooves all Ghanaians to join the GIS to make it impossible for our shut borders to be breached because it is in our interest to do so.

In some jurisdictions, citizens would not close their eyes to such breaches but would rather raise alarm so the security agents can take action.

The President might have not declared a state of health emergency but the realities on the ground point to that.

Should the impunity by our ECOWAS neighbours continue on this scale, we might have to consider stiffer sanctions.

The current repatriations appear not to be deterring others desirous of embarking on the trips.

We call on the management of the GIS and the Interior Ministry to boost the morale of the personnel manning our porous borders with a view to stopping the insulting breaches by foreigners.

To think such persons come in regardless of existing COVID-19 safety protocols even makes the occurrences scary.

A few days ago, 51 persons were arrested by GIS personnel at checkpoints in the country. There are as many of that number making it eventually into the country.

This is a subject we must tackle more robustly than we are seeing.