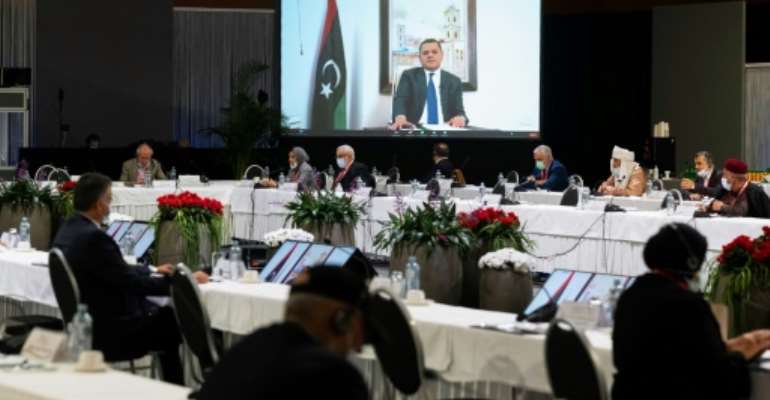 Abdul Hamid Mohammed Dbeibah delivers a speech via video link during a meeting of the Libyan Political Dialogue Forum. By Handout (UNITED NATIONS/AFP)

Abdul Hamid Dbeibah, Libya's newly elected interim prime minister, is a wealthy businessman and Canada-educated engineer close to Turkey tasked with uniting the war-riddled country ahead of elections in December.

He was born in 1959 in the port city of Misrata, stronghold of powerful militias who were key in defeating longtime dictator Moamer Kadhafi in a NATO-backed uprising a decade ago.

And yet Dbeibah once led the state-run Libyan Investment and Development Company (LIDCO) under the dictator who was slain by Misrata fighters in 2011.

During Kadhafi's rule, Misrata, Libya's third city, underwent an industrial and economic boom from which the Dbeibah family and many others profited.

Dbeibah is also known to be close to the Muslim Brotherhood while heading a holding company that has business subsidiaries across the world, including in Turkey.

Married and the father of six children, Dbeibah holds a masters degree from the University of Toronto in engineering.

His expertise introduced him to Kadhafi's inner circle and to head LIDCO which managed huge projects, including the construction of 1,000 housing units in the city of Sirte, Kadhafi's hometown.

In a surprise outcome given his past links, the 61-year-old Dbeibah was on Friday selected as interim premier at a meeting in Switzerland of 75 Libyan delegates selected by the United Nations.

The vote marked the start of a new chapter for the country after the failure of a 2015 UN-brokered deal that established a Government of National Accord (GNA) based in Tripoli.

It also aimed at building on a fragile ceasefire in force since October.

Libya has been mired in violent turmoil with the country riven by divisions between the GNA and a rival administration backed by military strongman Khalifa Haftar in the east.

The Libyan conflict has drawn a plethora of foreign players, including Turkey which backs the GNA.

The interim prime minister was considered an outsider compared to other candidates vying for the job of steering Libya to elections.

After the 2011 revolution, Dbeibah took his first tentative steps in politics and founded the Libya al-Mostakbal (Future) movement.

Today he faces an ambitious and challenging programme.

He has 21 days to form a cabinet and another three weeks to win a vote of confidence in parliament.

By March 19 at the latest he should be ready to forge ahead with a 10-month transition aimed at preparing the country for elections on December 24.

Speaking by videoconference to the meeting in Switzerland ahead of Friday's vote, he vowed to "use education and training as a path towards stability".

"We will work so that security organs are professional and weapons are placed under the monopoly of the state," he said.

Oil-rich Libya has been awash with weapons since the revolution, with numerous armed groups vying for power.

Dbeibah has also promised to set up a ministry of "national reconciliation", to woo back foreign investors and create jobs for the young.

He has set a target of ending "within six months at the most" the daily power cuts that have plagued Libya for years.

World powers, including the United States and Russia, have welcomed the election of Dbeibah and three presidency council members -- each representing one of Libya's main regions.

But some analysts, and Libyans themselves, remain sceptical.

"If he manages to do (all) this in 10 months I guarantee he can stay for more than 10 months," a Libyan tweeted.