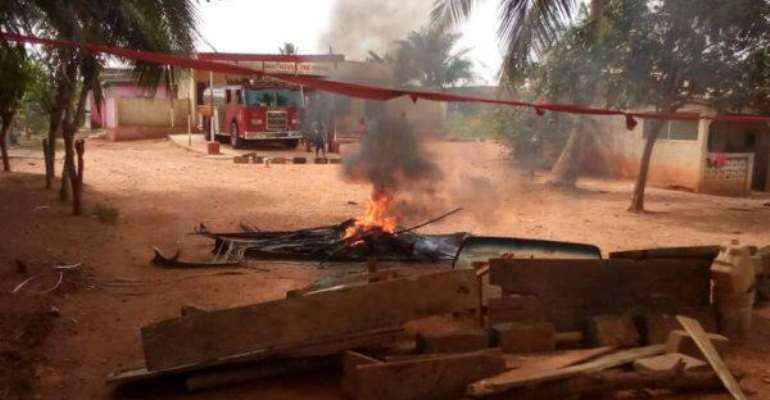 Scores of youth of Breman-Asikuma on Wednesday protested against the alleged relocation of Asikuma-Odeben-Brakwa District fire tender for water supply in Awutu-Senya East Municipality in the Central Region.

According to the youth, they had no qualms with relocation or use of the Tender for other purposes, but expressed disappointed with the inability of the Regional Command of the Ghana National Fire Service (GNFS) to make alternative arrangements in case of fire outbreaks.

They were equally disappointed that in the wake of the dry season with rampaging fire outbreaks across the District, the Tender serving over 112,706 people representing 5.1 percent of the Region’s population had to be relocated leaving those people to their fate.

One of the protesters who gave his name as Philip Amoah, said they intentionally deflated the tyres of the fire tender to prevent any movement of the vehicle and dared anyone to move the vehicle beyond the District.

Acting District Chief Executive, Isaac Odoom, the in an interview with the media, confirmed the fears of the youth saying alternative arrangements should have been made for a replacement.

He cited similar instances in the past where the Tender was returned with multiple faults forcing the Assembly to use its meagre resources to maintain it.

“We are in the-peak season for fire outbreaks, so why should they take the only fire tender to another district to work without making prior alternative arrangements.

“As the Head of the District Security Committee (DISEC), I was not informed about it, yet I stand blamed,” he explained.

He denied the allegations that no one was informed of the intention, saying, “we informed the District Fire Commander who was expected to informed the DCE as the Head of DISEC.

“We are temporary taking the Tender to the Pentecost Centre in the Awutu-Senya East Municipality for water supply to the facility based on a directive from Headquarters.

“We did assessment across the Region to ascertain the Tenders with low risk to support the exercise in case of fire outbreaks,” he explained.

The Central Regional PRO of the GNFS stated that the Tender will augment others brought from the Greater Accra Region for the exercise.