Tamed Gabonese monkeys face long journey back to the wild 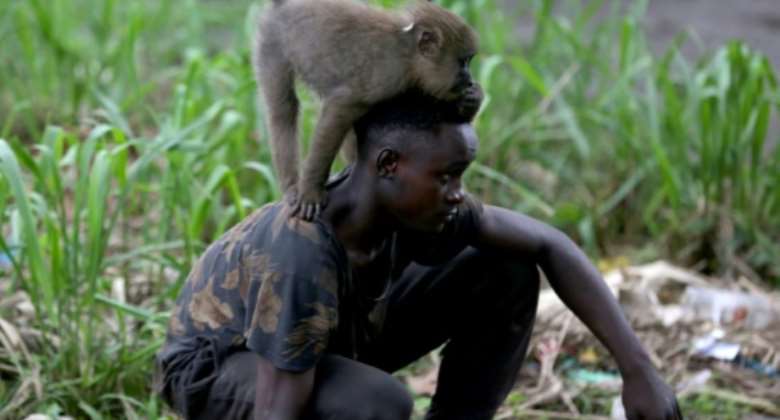 A boy plays with a monkey in the courtyard of a house in Moanda. By STEEVE JORDAN (AFP)

The talks had failed and there were downcast faces in the car, which was all set to drive off.

Suddenly a man rushed out and yelled: "It's fine. Come and fetch your monkeys!"

The owner of two small mandrills had just given way, letting the Save Gabon's Primates (SGP) association take charge of the orphaned animals, born in the equatorial forest that covers much of the country.

The mandrill, like the gorilla and the chimpanzee, is safeguarded by law from hunting, capture, sale and detention.

Its meat is still prized by some, but there are also families who prefer to turn the monkeys into pets, often acquired from poachers when they were babies. That, too, is illegal.

Thierry Tsoumbou, a 34-year-old veterinarian, is used to listening to different views while he spreads awareness of wildlife issues and promotes the SGP's rehabilitation programme.

In Moanda, 700 kilometres (435 miles) east of the capital Libreville, the vet sat outside a house with the owner of the two mandrills, surrounded by about 10 distrustful local men.

'How much will you give?'

"I have come to fetch your monkeys because since 2003, the law has forbidden people to keep them at home. Otherwise, the authorities will come and collect them by force, and you will be held to account," Tsoumbou explained.

"How much will you give us?" the owner said.

"We don't give money. This is for your own good and the good of the animals," Tsoumbou replied.

"If you don't want to buy them, we would prefer to release them in the forest," said the unconvinced owner.

"They're no longer used to the forest. If you release them, they will die. And these animals can transmit serious diseases to you. Do you remember Ebola? The sickness was passed on to men by monkeys," the vet said.

As tensions rose, the owner's wife wept, realising that Lucien and Lucienne, as she named the mandrills, would no longer be part of the family.

The monkeys gambolled in their playground, a scrapyard for rusting lorries. Teenaged children chased them and then took them in their arms and hoisted them on their shoulders.

"This is also and above all for their own good," Tsoumbou said. "They are not pets. They need to live in a group in the forest."

"Off you go! Or compensate us!" the owner replied. The vet hesitated, knowing that only officials of the ministry of water and forests have the authority to seize the animals.

However, keeping protected primates is punishable with several months in prison and a fine of up to 10 million CFA francs (almost 15,250 euros / $18,280).

Although these penalties are very rarely imposed, the threat is usually persuasive.

At the last moment, the owner changed his mind and ran out to stop Tsoumbou's car.

The mandrills were taken to the Centre for Primatology (CDP) in the Franceville Centre for Interdisciplinary Research (CIRMF), about 60 kilometres (37 miles) from the village.

The ride is just the first stage of a far longer journey if they are to return to the wild.

In quarantine, scientists test the animals to ensure that they are not carrying diseases ranging from Ebola and hepatitis to tuberculosis and HIV.

Animal trainers then teach the monkeys to relearn the behaviour patterns of their species.

Keeping protected primates is punishable with several months in prison and a hefty fine. By STEEVE JORDAN (AFP)

Dmitri Mboulou, the head of the nursery, gently handed a feeding bottle to two small chimpanzees whose mother was slain by hunters.

"I teach them to wake up to life, a little as if I were their mother," he explained.

After a phase of isolation, the little primates join their fellows, discovering and building the social relationships that will cement them as a new group, essential for survival in the wild.

The CDP hosts 350 monkeys of nine species. They include orphans who survived poaching, primates rescued from animal trafficking and former CIRMF laboratory subjects.

"Every year, more than 50 are recovered and that's without even us looking -- it's just the tip of the iceberg," said Barthelemy Ngoubangoye, president of the association and head of the CDP.

"Their ancestors always hunted, so people feel there's nothing wrong with it, and that endangered species conservation is a western issue," he said.

"When a person buys one baby chimpanzee, he is taking part in the massacre of the entire (family) group, or about 15 individuals", said Pauline Grentzinger, a veterinarian at the Lekedi Natural Park.

This sanctuary near Franceville is the setting for the last phase of rehabilitation, in a semi-free environment where the animals are followed until their possible reintroduction into their natural habitat.

Grentzinger listed some key conditions for this.

"We need a viable group, with no sick animals, in an area that can be monitored, without poachers, without other groups of chimpanzees, without humans nearby," she said.

Achieving these goals is a very tough bet. But, in Gabon, it has sometimes paid off.