An Ode To General Akwa 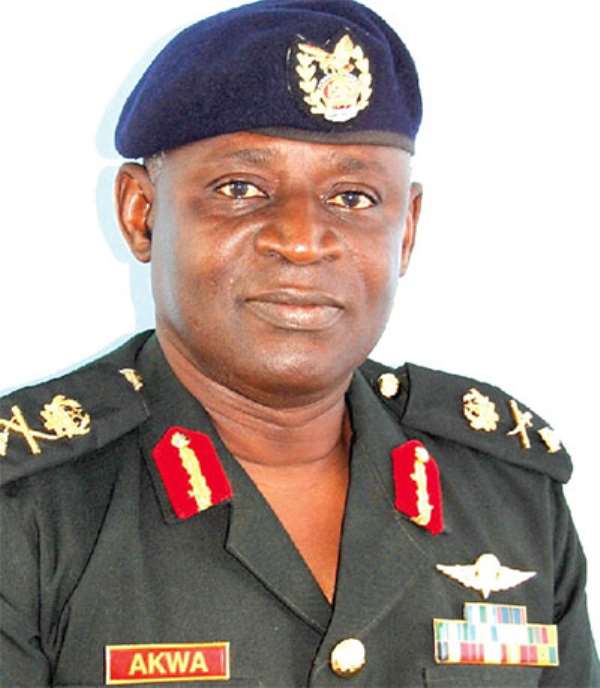 According to media reports, His Excellency the President has appointed a new Chief of Defence Staff (CDS), meaning that the tenure of office of Lt General Obed Boamah Akwa as the CDS is over.

General Akwa is welcomed to the community of hundreds of retired officers dotted all over the country, about whom nothing is heard until they pass on into eternity, then obituaries and tributes would pile up for them.

I first met 2/Lieutenant OB Akwa in Michel Camp, Tema, in April 1979 when I had just returned from Sandhurst UK as a fresh Army Officer. He and I were the most junior officers in the officers' mess and we were very close.

We both saw the May 15, 1979 Coup D’etat of Flt Lt JJ Rawlings and actually the events of June 4, 1979 when other ranks took power in Ghana Armed Forces.

On June 26, 1979, soldiers in IBN Michel Camp rebelled against the officer corps and arrested all the officers into the guardroom. They shaved off our hairs and released we the Lieutenants to be in charge of Headquarters. The Army High Command brought former IBN officer Captain Charles Okae to be the Acting CO of the unit.

I later left to be demonstration company commander at the Ghana Military Academy while Lt Obed Akwa became the Adjutant of IBN.

Fate had different plans for me. I was made ADC to the Army Commander, sent to Lebanon, arrested, court martialled and jailed in Nsawam Prisons, released to PNDC Headquarters, arrested again and detained for six months and retired as Captain.

My friend however had a different course. He ended up as Commanding Officer (CO) of 2 BN in Takoradi as Lieutenant Colonel and became ADC to President JA Kufuor, then later Commandant of the Ghana Armed Forces Staff College (GAFSC); then President John Mahama made him Army Commander and President Nana Akufo-Addo made him Chief of Defence Staff.

He has reached the highest pinnacle of the system, in the rank of Lieutenant General, like Lt General SK Obeng, Lt General EK Kotoko and others. To God be the Glory.

What lessons can posterity and serving soldiers learn from the meteoric rise of Lt General Obed Boamah Akwa?

First and foremost, be as professional as possible in all your dealings. You see, the military is not the place for “discretion”. It is the opposite of the legal profession. In law, Judges, from Magistrate to the Supreme Court have the widest discretion to apply the law.

In the Army it is not like that – it is target and results. Six o’ clock means six o’clock, and not about six o’clock if you are a soldier and you want to be promoted to the next rank and next level, then know how to obey orders and carry out orders – it is as simple as that. ‘

Another lesson from General Akwa is that, stay clear from politics. We politicians thrive on lobbying, debating, maneuvering, alliances here and there – jockeying for influence and power. If you are a soldier, stay away from politicians. Do your duty as a soldier – guard duties, operations, reports and that is all.

Look at General Akwa – he was ADC to President Kufuor, then NDC made him Commander of GAFSC and Army Commander!!! And Nana Akufo-Addo made him

CDS!!! It means the politicians concluded that this man is just a soldier, no more no less.

One problem I have with the system is the retirement age. In Israel, they make their Generals at age 40 plus and retire them at about 50, so they are fully ready for the private sector to contribute to the economy and national life.

In the British/Western model, we make Generals after 60 years, and retire them close to 70 years – what can they do with their lives after that?

The other day I was rushing out of the Supreme Court to the High Court when at the entrance I almost collided into an elderly man – I stopped – hold on – my former CO, followed by a Brigadier, then former Army Commander!!!

They looked, sorry to say, haggard, resigned to fate – that is not good. Let us retire all our soldiers rank notwithstanding latest by 60 so that they can rebuild their lives in the civilian setting.

You know, a Roman General, CATO said that he does not understand why even animals, like a horse, respond favourably to tender loving care, but military commanders treat their subordinates with brutal fear all the time.

Lt General Akwa was not like that. Very human and almost soft, but as hard as iron. He will look at your face quietly and tell you what you don’t want to hear, and expect you to carry it out, without debate – period. .

He will be sorely missed by his staff officers and immediate subordinates. I hope to collide with him at the Retired Commissioned Officers Club one day or perhaps at a funeral of some retired officer or something like that.

The author has 56 publications published on ModernGhana.

Stiffer sanctions needed to punish persons who engage in tax...
33 minutes ago