Morocco's ex-con YouTubers in the spotlight 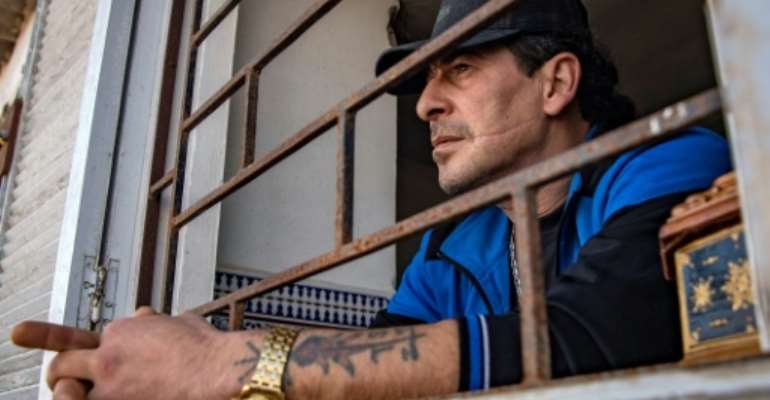 Moroccan YouTuber and former prisoner Mohamed Moustadraf is a former drug trafficker who accumulated a total of 23 years behind bars. By FADEL SENNA (AFP)

Moroccan former prisoners have moved out of their jail cells into the social media spotlight by sharing their thug life experiences on YouTube, making them minor celebrities.

"You had to be a real ace to sell drugs in prison like I did," boasts Mohamed Moustadraf, 48, one of a host of ex-cons turned online storytellers.

A former drug trafficker with tattooed arms, a ponytail, a tracksuit and a big gold watch, he has served a total of 23 years behind bars.

He is one of around 20 ex-con YouTubers now active in the North African country, many of them notching up millions of views.

They regale their audiences with tales of vicious rivalries between inmates and vendettas against wardens or let off steam about mistreatment and overcrowding, in chastening warnings against the perils of a life of crime. 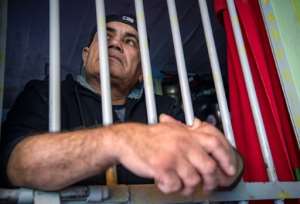 Former prisoner Mohamed Bentazout, released in 2020 after 20 years in jail, has built a replica of his cell at his family house in the city of Kenitra. By FADEL SENNA (AFP)

"In prison and outside, I was earning a lot of money," said Moustadraf, a father of three who also goes by the name of Slaoui.

"But I lacked one thing: my freedom. Today, I try to take advantage of it and share my experience with others, especially young people."

Like the other jailbird influencers, he insists his aim is not to glorify his criminal record.

Slaoui says he was encouraged to go on YouTube by a group of rapper friends, including the musician Gnawi who was sentenced to a year in jail for insulting a policeman live on Instagram. 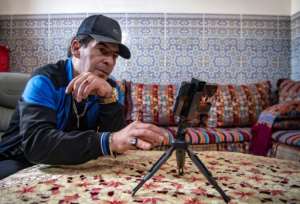 Moustadraf is one of around 20 Moroccan ex-prisoners who have notched up millions of views on YouTube. By FADEL SENNA (AFP)

Another former prisoner, Ilyas Korrari, who is also a hit on YouTube, said opening up to his thousands of subscribers is "like therapy", and a form of catharsis for his past.

"Before people would avoid me, look at me funny, or worse, they were afraid of me," he said.

"I had so much hatred and vengeance in me because society is ruthless with people who make mistakes, but the camera has cured me," said Korrari, also a former drug dealer, sporting a tight T-shirt, slicked-back hair and a neatly trimmed beard.

Korrari, who has spent 17 of his 38 years in jail, said he decided to "radically change" his life on his last release in 2018.

He has since posted videos of his time behind bars, and his YouTube channel today has more than 240,000 subscribers and has attracted over 21 million views.

Last year, he set up a small audiovisual production company in Kenitra, north of the capital Rabat, although he insists the earnings from his success have been "modest".

The jail-themed channels have built a minor cult following.

"I was first interested in these ex-convicts because they have created a buzz, their videos get millions of views, it's very compelling!" said one fan, a Casablanca man in his 30s.

"They tell their stories and denounce injustices in the prison environment. The one thing that disturbs me is this heroic posture, or even the trivialisation of crime, that some of them adopt."

Moustadraf said he started up his channel in 2019 to "change the way people look" at ex-cons.

"Just because we've been in prison doesn't mean we have no faith or law."

He said he "turned the page on illegality" in 2016, and that his appearances since have scored 13 million views.

Moustadraf often speaks of overcrowding in prisons and corrupt guards and raises the alarm on rights violations and "suspicious" deaths in custody.

To survive, he said, waving his heavily inked arms, "you have to climb up the ranks, be patient, endure torture and injustice". 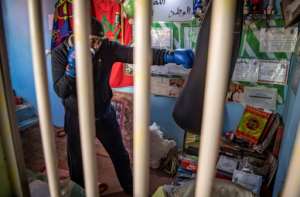 Bentazout, a 57-year-old former boxer, was jailed for murder but has always claimed his innocence and is working to have his case reviewed and name cleared. By FADEL SENNA (AFP)

A prison authority spokeswoman contacted by AFP warned against "those YouTube channels... (and) the lies they tell".

She stressed that all complaints from prisoners' families are examined "with great attention".

But former inmates' accounts tally with official reports of overcrowding and frequent ill-treatment in Moroccan jails.

With a nationwide prison population of more than 86,000 in 2019, occupancy exceeds 250 percent of official capacity in some detention centres, says the non-governmental watchdog Observatory of Prisons.

Mohamed Bentazout, a murder convict released in 2020 after 20 years in jail, said "the accounts of former detainees fill the void left by official media".

The 57-year-old former boxer still insists he is innocent and working to have his case reviewed, using YouTube clips to reach a "large audience in Morocco and around the world".

To denounce the "glaring injustice" he says he suffered, he now lives in a tiny cell he has built on the terrace of his family home.

The mock-up cell is decorated with Moroccan flags, portraits of King Mohammed VI, certificates earned in prisons and medals from his boxing days.

Bentazout swears he will not move out until his name is cleared.