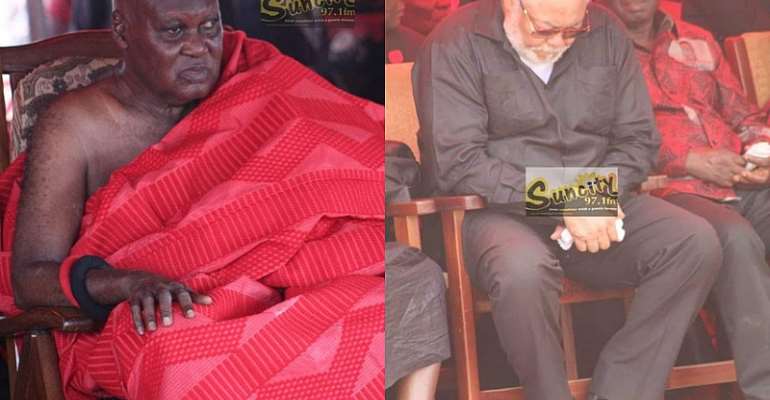 The President of Sunyani Traditional Council, Nana Bosoma Asor Nrawiri II has eulogized Former President Ft.lt. Jerry John Rawlings, describing his demise as one that hit him hard and earlier than expected.

Speaking on behalf of the Omanhene at a well-attended press Conference at his Palace in Sunyani, Nana Oboaman Bofotia Boamponsem II, the Krontihene of Sunyani Traditional Council, recounted the special relationship that existed between Sunyanimanhene and Mr Rawlings as one that dates back to 1982, two years after Nana Bosoma ascended the throne as the Chief of Sunyani.

He described the first President of the 4th Republic as a great inspirational leader, pillar and a Man of Principle who never compromised his principles and what he stood for.

“Rawlings was not only a friend to the Omanhene, his wife Nana Konadu Agyeman Rawlings, was also a great friend of the late Sunyani-Manhemaa, Nana Yaa Nyamaa Puduo who passed on two years ago. You saw Rawlings at her funeral in Sunyani! In fact, the Traditional Council have lost a good Friend” he observed.

Nana Bofotia chronicled Numerous developmental projects in the Region Under Rawlings Reign, including the extension of asphalted road from Kumasi to Dormaa via Sunyani, Connection of then Brong-Ahafo Region to the National electricity grid, even when critics rose against the decision on-premise that “Akosombo Dam” would recede by extension of electricity to the Brong -Ahafo Region and the construction of Bono-Ahafo Regional Hospital in Sunyani as few of many infrastructural developments birthed by Jerry’s association with the Sunyani Traditional Council.

“JJ Rawlings was the one who bestowed on him the Omanhene status, there was a time he honoured Nana Manhene’s 25th anniversary before invitation could reach him, it shows the kind of love they had for each ”he revealed.

He continued that, the transition of deplorable Bono Ahafo to the one we see today cannot be mentioned without Rawlings, adding, he has contributed a lot to the making of Sunyani and the entire Brong-Ahafo Region.

Nana Bosoma prayed to God to grant the wife, Nana Konadu Agyemang Rawlings, Children and the entire Anglo family the strength of heart to endure the pain.

Ghana’s longest Head of state died on Thursday, November 12, 2020, after a short illness.

Akuapem Poloo conviction should serve as a deterrent to nude...
46 minutes ago